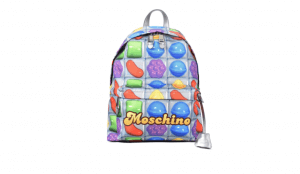 King, the creators of the Candy Crush game, have partnered with Moschino and the acclaimed creative director Jeremy Scott to celebrate the fifth anniversary of the Candy Crush franchise. Together, they are launching a limited edition colorful capsule collection comprised of “summer festival must haves”.

Candy Crush is a game that is played by millions of people around the world. The partnership with Moschino, a fashion house at the forefront of merging pop culture with fashion, brings fans of the Candy Crush franchise an opportunity to show they are fans of the game by wearing the styles from Moschino’s Candy Crush Collection.

The collection will be available exclusively on Moschino.com until the collection sells out. The designs were created by Jeremy Scott, Creative Director for Moschino. The collection includes a backpack ($650 USD), a phone case ($70 USD), and swimwear for men and women ($250 USD and $300 USD).

The celebration of Candy Crush’s fifth anniversary will culminate at the exclusive Moschino Candy Crush Desert Party during the Cochella music festival, where the entire space will be transformed into a Candy Kingdom. Key visuals and moments from the game will be brought to life with tangible props that will be as vibrant in-person as they are on screen.

The big news everyone was talking about on my Twitter feed today had to do with Activision Blizzard and the announcement that they have agreed to acquire King Digital Entertainment for $5.9 billion. There is much speculation about what will happen as a result of this acquisition.

King Digital Entertainment is a company that makes mobile games. The games themselves can be played for free. However, each game allows for in-game purchases. There has been much discussion about whether or not that mechanism means that the game is truly free to play (or if one must spend some real world currency in order to advance in the game.) To be fair, King is not the only mobile gaming company that uses in-game purchases. It’s fairly common.

You might know King from the Candy Crush Saga game, which is a match-three game that gained some popularity. Which brings me to some of the litigious history surrounding some of King’s games. There was a time when King had a trademark related lawsuit with Albert Ransom, the developer of CandySwipe. In 2014, the two parties each withdrew their lawsuit against the other one.

In addition, King was involved in a lawsuit with Stoic Studio. This was another trademark related lawsuit regarding Stoic Studio’s game The Banner Saga. The two companies came to an agreement that protected their respective trademarks in 2014.

Activision has some mobile games that can be played on iPhone or iPad, and a few that are available on Android. Blizzard Entertainment, however, has just begun entering the mobile gaming arena with Hearthstone. It is a virtual card game that started out as available on PC and Mac, and later became playable on iOS and Android.