There’s a fine line between keeping a close eye on your kids and being an “overprotective” parent. Kids want to go out and have fun, and parents want to make sure they’re safe. What are families to do when those two well-meaning viewpoints collide? With Kiband, they don’t have to.

Nick got to talk with Jeff from Kiband at CES. Kiband is a smartband for kids that connects wirelessly via Bluetooth to a parent’s smartphone to prevent getting lost. Parents just use the accompanying smartphone app to designate a range in which they can monitor their child’s whereabouts. When the child nears the boundaries of this range, their band will vibrate, and the parent will be alerted. Kiband gives kids the freedom they crave and parents the peace of mind they need.

Kiband will cost between $100-$120 and is available for preorder on Kiband’s website for delivery in June or July. 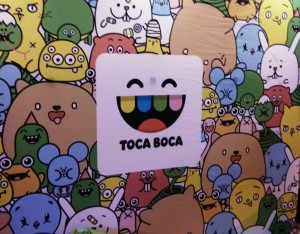 As a a parent with a tablet-loving daughter, I’m always worried that she’s either playing inappropriate games or else building up whopping a credit card bill via in-app purchases. Being tech-savvy, I can easily rectify the latter by controlling the password to my account, but this doesn’t always negate pester-power. The former is still a concern and I’m not alone as these two issues are relevant to parents everywhere.

To help mums and dads, Swedish outfit Toca Boca, “a play studio that makes digital toys for kids” have created a range of open-ended, non-competitive games that appeal to children where the initial purchase cost is the only time you need to flex the credit card. There are over 20 apps available for Apple, Android and Amazon devices, and include games for young hairdressers, chefs, doctors, vets, chemists, scientists and drivers. The themes are very similar to some of the popular “free” games that are out there; the Toca Boca versions usually cost US$2.99 but there are no subsequent in-app purchases.

I chat to Sonia about the Toca Boca apps and how parents can be more confident in what their children playing on their tablets without the worry of an enlarged credit card bill. KidzVuz is an on-line community for children that lets them review and comment on kids’ gear. Andy and Don talk with co-founder Rebecca Levey about the site’s features and how they’re tailored to children.

Children are often left out of the on-line world as the major social networking sites such as Facebook enforce age restrictions on their members, and rightly so. KidzVuz encourages junior members to join in but addresses child protection issues by seeking parental permission, moderating all content and preserving anonymity. The site is completely COPA-compliant.

KidzVuz encourages children to upload video reviews of toys and games; to reward participation, many activities are turned into games with worldwide leaderboards. The site is categorised with different areas such as games, books and film. Food and travel has proved popular with children reporting back on family holidays.

KidzVuz is free to use by children and there is complementary blog for parents.