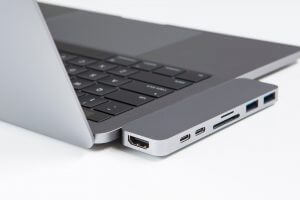 HYPER is a fashionable line of mobile accessories that are manufactured by Sanho Corporation. HYPER is showcasing its HyperDrive – the world’s most compact, fastest 50Gb/s Thunderbolt 3 USB-C Hub for the 2016 MacBook Pro – at CES 2017.

The 50Gbps bandwidth allows all 7 ports to be used simultaneously, including connecting to a 5K Thunderbolt 3 Display and a 4K HDMI display at the same time. The Thunderbolt 3 port on the HyperDrive also supports up to 100W power delivery allowing the user to charge the MacBook Pro at full speed while using the HyperDrive.

The HyperDrive’s highly portable compact size allows the HyperDrive to attach to the side of the MacBook Pro without any cables or obstructions, allowing the user to always have access to all ports at all times without the need the need to carry multiple cumbersome dongles. The same HyperDrive works perfectly with both 13” and 15” 2016 MacBook Pro. Hypershop introduced several products that allow you to connect wirelessly to an attach device even if you have no internet connection. The iUSBport has its own router with it’s own SSID . The batteries last about 8 hours on a charge. It has two USB ports. The content on any attached device such as a USB hard drive becomes available wirelessly to an iPad, iPhone, Android device or any Wi-fi enabled device. Can stream up to three different movies to three different devices at a time. You don’t even have to be connected to the internet. The  iUSB Port HD is like the iUSBport but it has a hard drive within the enclosure. You can install your own or Hypershop can install one up front for you. It can handle up to a 2TB drive. Hypershop also introduced a 64GB flash drive which can be plugged into a computer and then connect wirelessly to the computer.

All these devices will be available in March the iUSBport will be $149.95. The iUSB Port HD will be $159.95 for a blank case with no hard drive enclosed and the 64GB flash drive is $64.95. All these devices would be great for families who travel a lot in the car, photographers or anyone who wants the ability to stream videos, documents, music on one device to their favorite mobile gadget.

Interview by Jeffrey Powers of Geekazine, and by Scott Ertz of F5 Live: Refreshing Technology.