Danish firm ReSound launched their iPhone-connected hearing aid, LiNX, at the Gadget Show. The world’s first “Made for iPhone” hearing aid uses both the technology and usability features of the Apple iPhone to bring hearing aids to a generation of users who expect more from their technology than the current generation of aids.

The hearing aid itself is discrete and fits neatly over the ear and pairs with the iPhone much like any other Bluetooth headset. 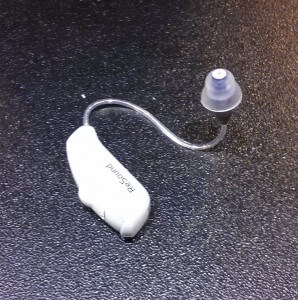 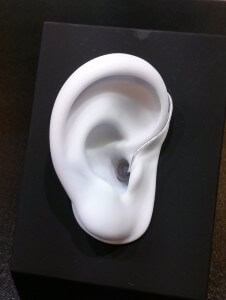 Once this is done, the benefits of having a smartphone-connected hearing aid become apparent. Starting with the obvious, phone calls can be re-directed from the phone to hearing aid, again just like a Bluetooth headset. Similarly, audio from music and video apps will play through the hearing aid, giving the wearing a much better experience than they’re used to.

Moving on, an iPhone (or iPad) app lets the amplification level be adjusted from the iPhone without fiddling around the ear. Who thinks anything of anyone using their smartphone in a public place now? The frequency response can be adjusted too, suiting both the wearer and the environment that they find themselves in, whether at in the quiet at home or a noisy restaurant. Background noise can be filtered out and speech enhanced. 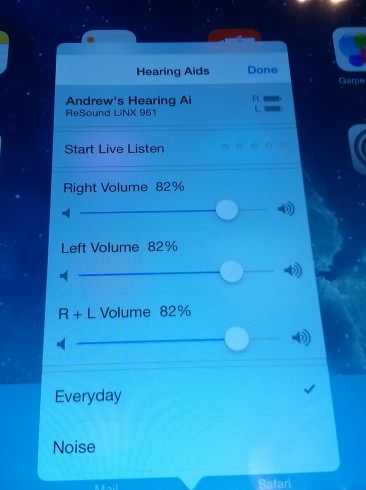 This is where it starts to get really clever. By using GPS and geo-fencing to locate the user, previously saved settings can be automatically selected based on location. For example, if the wearer frequently goes to a local bar, the GPS location and hearing aid settings are saved so that the next time the wearer goes to the bar, the settings are reused. 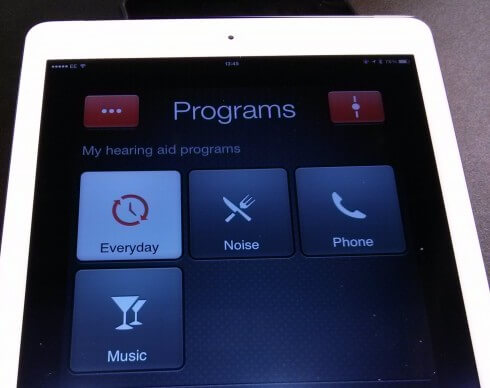 David from GN ReSound takes me through the features of the ReSound LiNX in more detail. After the interview I had an “ears-on” trial of the LiNX and it was impressive with a well-designed app. I’m not hearing-impaired so can’t comment on the audio enhancing features, but I could hear the effects of the different frequency responses.

I grew up with a Grandmother who was hard of hearing and communicating with her was hard and often frustrating. Any time someone introduces an improvement in hearing aid products I am interested.

Siemens showed off their new Aquaris Micon line at CES 2013. The Aquaris line is water proof, dust proof, shock proof. So unlike normal hearing aids you can wear them while working in a dusty environment like a workshop or even swimming. Like all Siemens products the Aquaris line is made of high quality material and is programable. They use the Micon best sound platform that was introduced in November 2012.

The Aquaris line is currently available. It is sold through audiologist and hearing aid providers. The cost will depend on how much the providers charge for their service. Expected cost for both the service and the device is between $1,000 and $2,000.

Carissa stops by to talk with Belltone about their latest innovation for the hearing impaired.  If you know someone with a hearing problem then this is a must-see.  No more fighting over audio levels while watching TV or movies – the person with normal hearing can listen at whatever volume setting they want – while the hearing impaired can do the same.  Not only does it work for home entertainment, but it can also be used with a cell phone.  Check out this really cool technology in the video below.