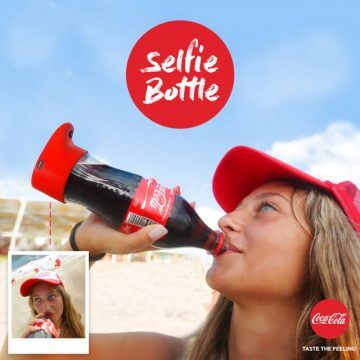 When it comes to selfies mobile phones created a phenomenon. People even began buying accessories for the job such as the selfie stick which allows the phone to be extended out and apps were created for the job.

But you have never seen a method for getting that picture quite like this one. Coca Cola has created what is probably the world’s first selfie bottle. Yes, you heard that right, a soda bottle that snaps an image of you each time you take a sip of your drink.

It’s a fairly normal looking Coke bottle, except for the camera attached to the bottom. The image was created by an advertising firm in Israel and will be spread via social media. The company hopes that people also spread images of themselves drinking a Coke.

There is no word on if the bottles will be available worldwide or of the price. They may catch on, but it seems more likely a novelty item.