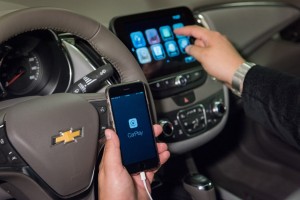 Chevrolet has announced that it will offer Android Auto and CarPlay compatibility in more models around the globe than any other automotive brand for the 2016 model year. There are a total of 14 Chevrolet models that will include both CarPlay and Android Auto – including the all-new 2016 Cruze.

The 2016 Cruze compact car will debut on June 24, 2015. It is Chevrolet’s best selling passenger car, with more than 3 million sold since launch. Cruze will have CarPlay and Android Auto.

Chevrolet’s seven-inch MyLink infotainment system gives owners a smart and simple way to access both Android Auto and Apple CarPlay. The eight-inch version of MyLink will be compatible only with Apple CarPlay at the beginning of the 2016 model year. Development and testing is not yet complete, but it’s possible Android Auto may be available on the eight-inch MyLink later in the 2015 model year.

Android Auto is built around Google Maps, Google Now, and the ability to talk to Google, as well as a growing audio and messaging app ecosystem that includes WhatsApp, Skype, Google Play Music, Spotify, and podcast players. More details can be found at https://www.android.com/auto/.

Apple CarPlay takes the iPhone features users would most want to access while driving and puts them on the vehicle’s display in a smart, simple, manner. It allows drivers to make calls, send and receive messages and listen to music right from the touchscreen via Siri. Apple CarPlay supported apps include Phone, Messages, Maps, Music and compatible third-party apps. More details can be found at https://www.apple.com/ios/carplay/.

Using either application is simple in a compatible 2016 Chevrolet. A “Projection” icon on the MyLink screen is visible when a phone is not connected. It changes to indicate either CarPlay or Android Auto (whichever is applicable) when a compatible phone is connected via USB. Android Auto requires a phone running the Android Lollipop 5.0 operating system or above. Apple CarPlay requires an iPhone 5 or later.

For those of you that actually read the show notes and I know 10’s of thousands do not the clue on the Apple Product announcement is in the show notes.. You want to talk about a product that the koolaid drinkers will get excited about. Action packed show, of course I had to have a mini soap box time over recent App Store announcements. Hope you enjoy the show. Action hotline is available 24/7 at +1-619-342-7365 leave your comments there or drop me an e-mail.