I’ve been looking at a few Mpow gadgets recently and so far, they’ve all done well, giving great performance for not much money. Next in line are the Mpow Cheetah Bluetooth 4.1 Sports Headphones to give them their full title. These are sport-oriented headphones, with a neckband to keep them in place. Let’s see if these are worth putting on the Christmas list for the January fitness programme. 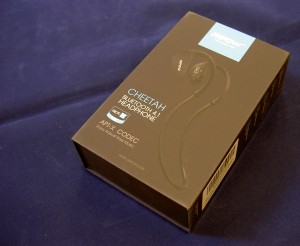 The Cheetah comes in a small grey box that has a curious soft touch finish to it. While it feels pleasant, it’s actually quite hard to see what’s inside the box as black headphones on a grey background doesn’t work well. Getting into the box is another matter too: there’s a hidden magnetic flap which will keep you guessing for a few minutes.

Once inside, the Cheetah headphones are coiled neatly on top. These are the boring black ones though they are available with yellow, pink, blue and green highlights. Taking them out and removing the tray reveals a small instruction booklet, USB charging cable and three sets of silicon earbuds (small, medium and large). Looking at the left and right ear pods, the features are not unexpectedly sparse and the leftside one has nothing. The right pod has all the controls, including volume rocket, multifunction button, mic, indicator light and microUSB charge port. Unlike the Swift, the door over the charge port has a small flap which makes in much easier to get your fingernail under. 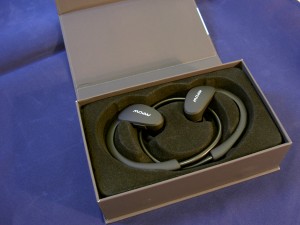 Charging is straightforward and takes about two and half hours from flat. There’s a red light on during charging which changes to green when the battery full. Similarly, the Bluetooth pairing is simple: hold down the multifunction button for five seconds until the Cheetah enters pairing mode and do the usual on the smartphone. Job done.

To get the headphones on, you untwirl them and put them round your neck before popping the earbuds in. To start with, I found the Cheetah headphones very uncomfortable – the earbuds just didn’t fit right. Then I realised I was wearing them the wrong way round. Twit. Once the headphones are in the correct ears, they’re much more comfortable. The neckband is sufficiently strong to keep them in place short of being physically ripped from your head, but it never feels like your head is in a vice. The neckband also keeps them round your neck if you need to take the headphones out for a few moments. 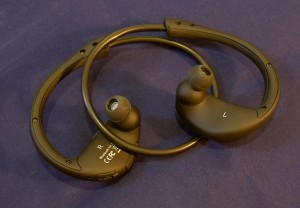 Pressing the multifunction button powers up the headphones. A voice announces “Power on” and “Your headset is connected” but doesn’t give battery time. The volume rocker works as expected for sound levels, and long pressing the volume buttons is supposed to skip forwards and backwards. On my phone, it skipped forwards ok, but skipping backwards didn’t work properly – it would only go to the beginning of the track, not the previous track. The multifunction button played and paused the track.

For calls, the Cheetah has various tricks, including double pressing the multifunction button for last number redial, and long pressing the – volume rocker to mute calls. In use, callers came through clearly and people said that they could hear me well. As with the Swift, the Cheetah announces the phone number of the caller. 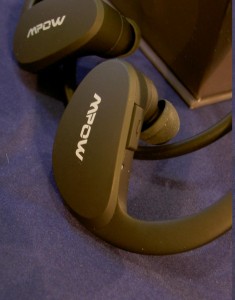 In terms of audio quality, Mpow has again proved that it can deliver great sound at low cost. As with the Swift headphones, I listened to a selection of tracks using a OnePlus 2 smartphone playing from a range of music services, some streamed, some downloaded. There was good presence and clarity, with reasonable high frequency reproduction and effective bass. I did feel that the Cheetah needed a bit of volume to perform at its best but even with that, these are good headphones. Perhaps not as good as the Swift but considering these are aimed at the sporting activity, they’re outstanding value priced at around US$25 or GB£19.

If you are looking for headphones to wear when working out, running or cycling, the Cheetah headphones are perfect. Sound quality is good, they aren’t going to fall off and at the price, you aren’t going to be too bothered if they get trashed by accident. Just make sure that you put them on the right way round.

Thanks to Mpow and Patuoxun for the review Cheetah Bluetooth 4.1 sport headphones.