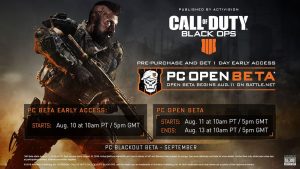 Call of Duty: Black Ops 4 has a beta that is starting on different dates. Playstation 4 owners had an exclusive opportunity to play the beta (which ends Monday, August 6, 2018). There are more betas coming up that you might be able to access.

PlayStation 4 and Xbox One players will be able to experience the Beta during the second weekend, which will take place from 10am PT Friday, August 10 until 10am PT on Monday, August 13.

To gain access to the console Beta, you will need a Private Beta key that will be provided when pre-ordering the game from select retailers. Players that pre-order digitally through the PlayStation Store or Xbox Store will automatically be registered to participate in the Beta.

There is also an PC Open Beta which will take place from 10am PT Saturday, August 11 until 10am PT Monday, August 13. To access this beta, you will need a Battle.net account. Those who pre-purchase Call of Duty: Black Ops 4 through Battle.net will also get a full extra day – beginning at 10am PT on Friday, August 10 – to play with their friends and community members. 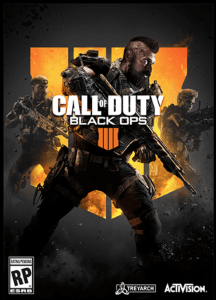