This month, I’ve been tinkering with the Optoma EH400+ digital projector (DLP). Unlike last month’s diminutive ML750ST personal projector, the EH400+ is a multipurpose projector suitable for professional presentations in meeting rooms and training centres. Let’s take a closer look, though be careful as it’s very bright…

The EH400+ is about the size of a generous tin of biscuits, measuring 30 x 23 x 9.6 cm and weighing 2.5 kg. It’s entirely luggable, but prospective purchasers should note that there’s no carry case included in the box, though it is an optional extra. While we are on the topic, there’s only the projector, power lead and IR remote control in the box. It’s a standard kettle-style power lead (IEC C13) with no power brick. 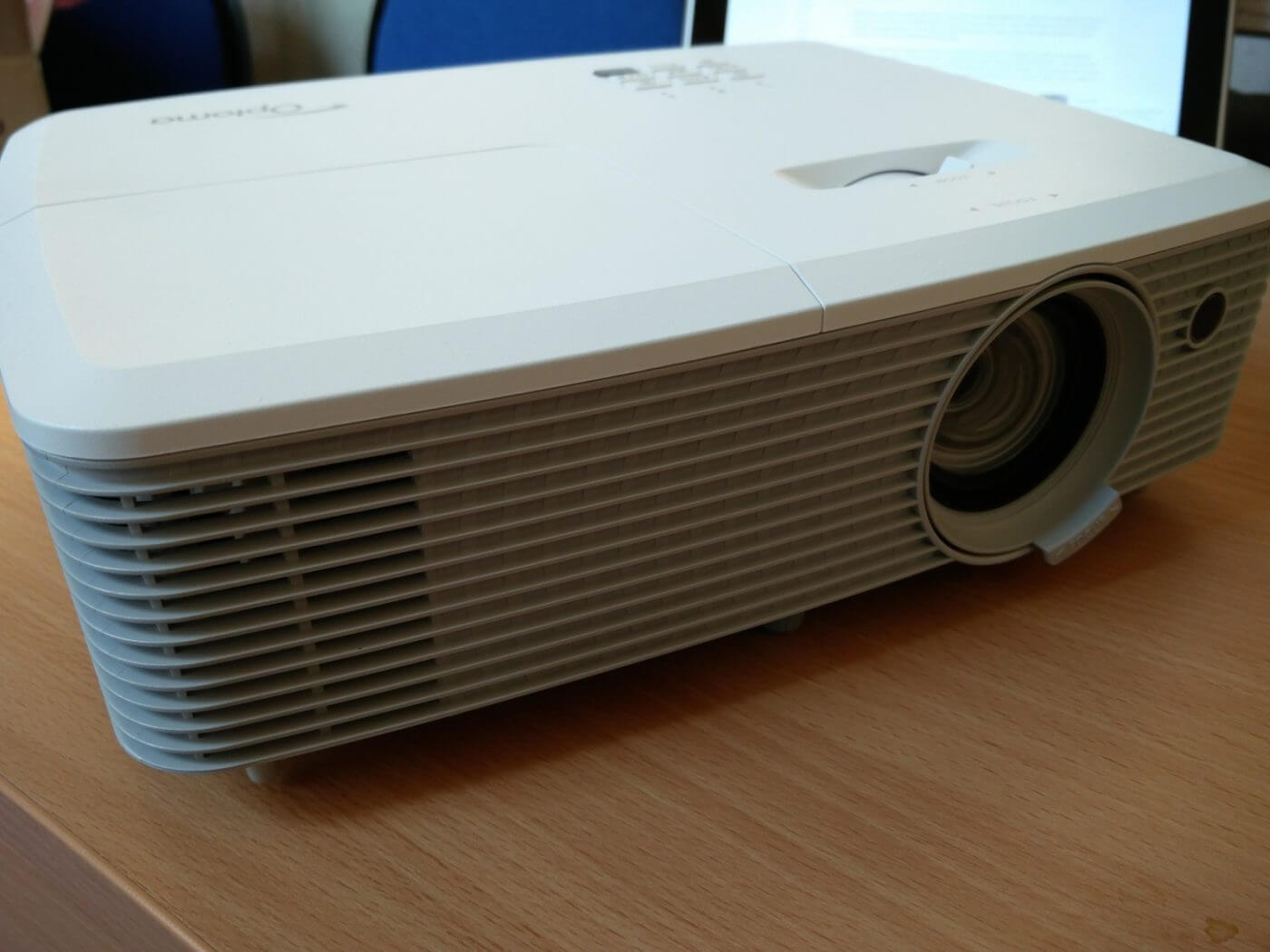 White on the top and dark grey round the sides, the Optoma projector ticks all the standard projector boxes. Lens on front, buttons on top and ports on the rear. The recessed lens on the front will form an image on a screen from as close as 1 m to as far away as 12 m 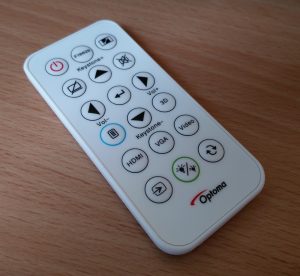 and at the furthest limit, the image will be over 7 m wide. That’s fairly big. The bulb puts out 4,000 lumens which is 5 times what the ML750ST put out, so can easily project a strong image in well-lit rooms. The large lens rotates smoothly through about 180 degrees to focus the image and there’s a lever on the top to zoom the image.

The buttons on the top of the projector offer the usual functions –  turning it on, adjusting the image, accessing menus, etc. but the main area of interest is round the back with a selection of connectors, ports and sockets. There are two HDMI, two VGA, S-Video, composite video, two stereo sockets and a network port. Yes, a network port…. 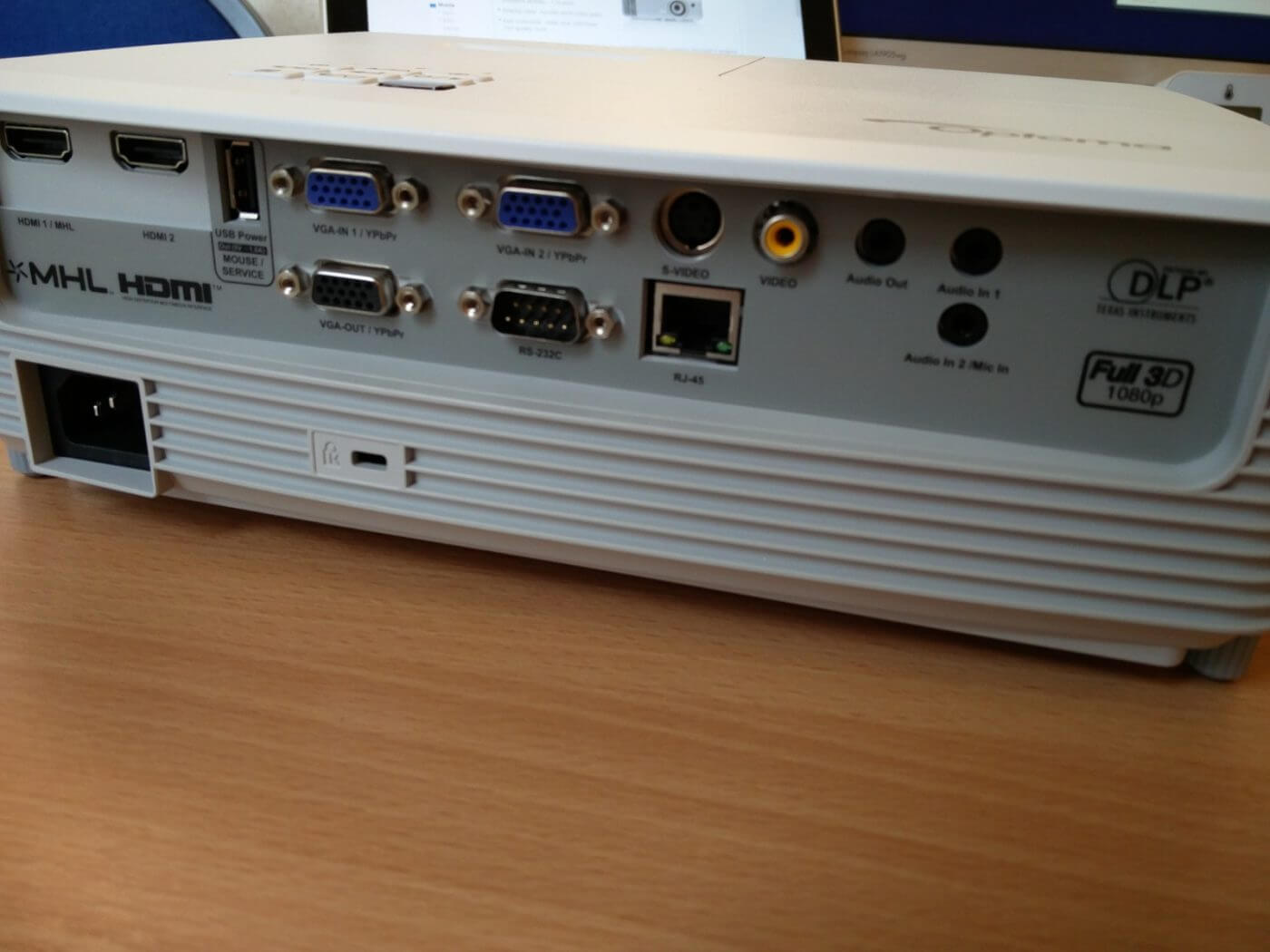 Turning the projector over, there are three rubber feet for setting the EH400+ on a table or other smooth surface. The foot at the front spins out to about a 1 cm to raise the projector up. For suspension from a ceiling in a permanent installation, there’s a three-point mount.

Turned on, the EH400+ is pleasingly quiet, though it does put out some light through the fan along with a fair amount of heat, as you’d expect with something this bright. 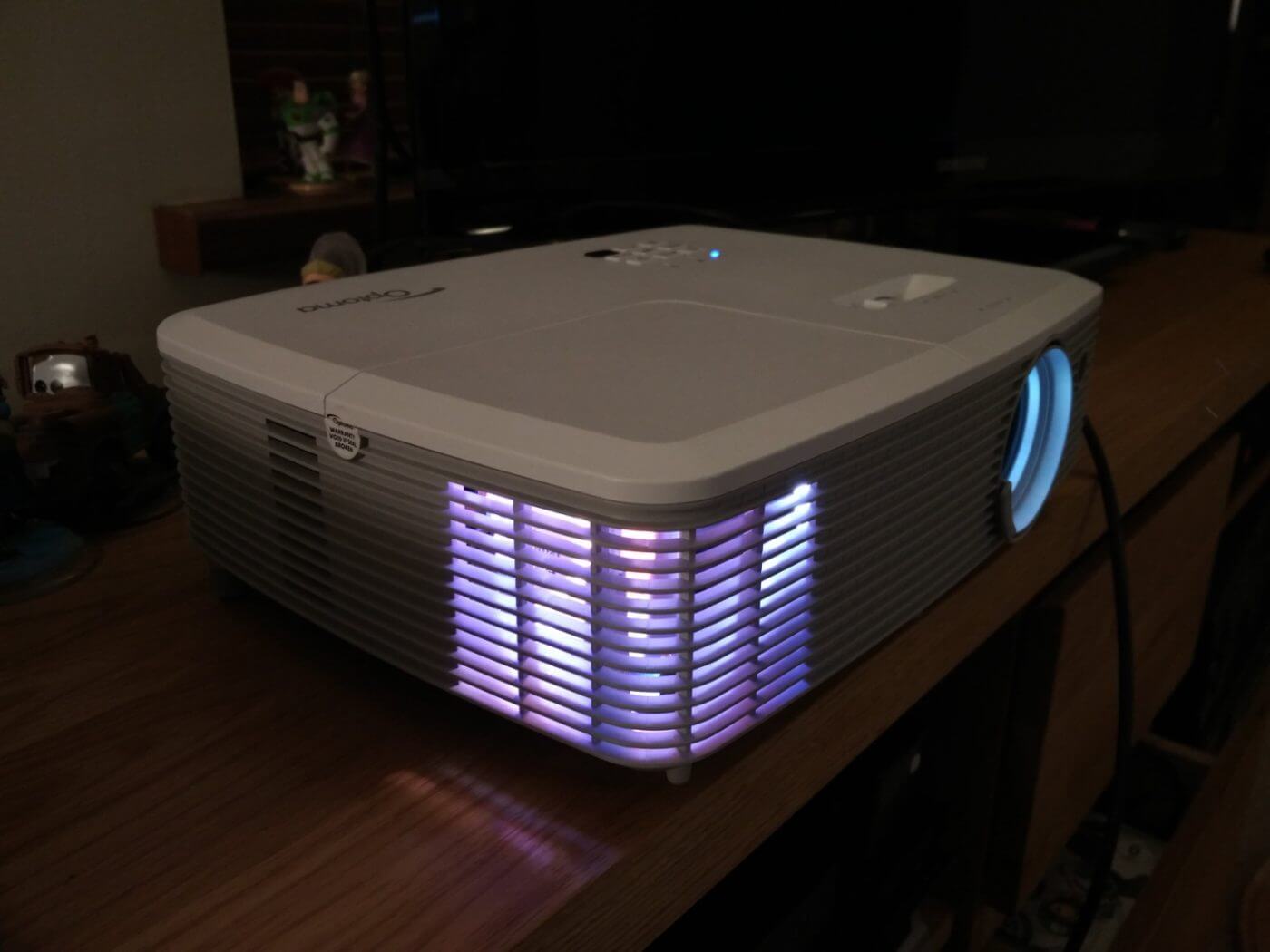 Connect up the EH400+ to a PC or laptop via HDMI and it appears as a full HD (1920 x 1080) monitor and with a suitable OS you can do the usual tricks of either reproducing the current desktop or extending the desktop to the EH400’s display. In most environments, it’s going to be showing the same display as the monitor but it’s a useful feature to have.

As with most digital projectors, the EH400+ has an on-screen display (OSD) for configuring the display and all the usual options are there for keystoning, image shifting and similar. But unlike most other projectors, there are far more options than are usually available. For example, there’s a small suite of test patterns to ensure the image is displayed perfectly. There’s even an option to adjust the colour output to compensate for the colour of the wall being used for projection.

On the downside, I didn’t find that the projector was very good at finding the input source automatically and most times I selected the input manually with the remote. Once selected, it took a few seconds to lock on but after that, the EH400+ stayed locked on.

While Powerpoint presentations are likely to be the bread’n’butter of the EH400+, it’s perfectly capable of showing films and movies too. I connected up my Sky Q and watched a few movies plus the new series of Thunderbirds in HD and 3 m across. My son loved it. The picture was good and the colours reproduced well, which is one of the headline features of EH400+ giving an accurate sRGB colourspace. The bright 4000 lumens coped well with an ordinarily lit room and while the sound from the built-in speakers would be acceptable in a meeting or training environment as it’s pretty loud, the quality isn’t going to win any hifi awards from the audiophiles.

And don’t forget, with two HDMI ports, a media streaming stick like the Roku or Amazon Fire TV can be plugged in permanently and powered from the USB port.

There’s no wifi with this Optoma projector (optional extra) but there is a network port which, at a minimum, can be used to control the EH400+. The projector can work with some audiovisual systems such as Crestron and PJ Link. I’ve no idea about these, but the web interface was actually a fairly handy way to control the projector – no faffing around pointing the remote at the projector and scrolling through options – just point and click. It’s even possible to sent email alerts from the projector if there’s a fan error or lamp life is exceeded. The web interface doesn’t cover all the features available via the built-in menus but it covers the main ones. Here’s a screen shot. 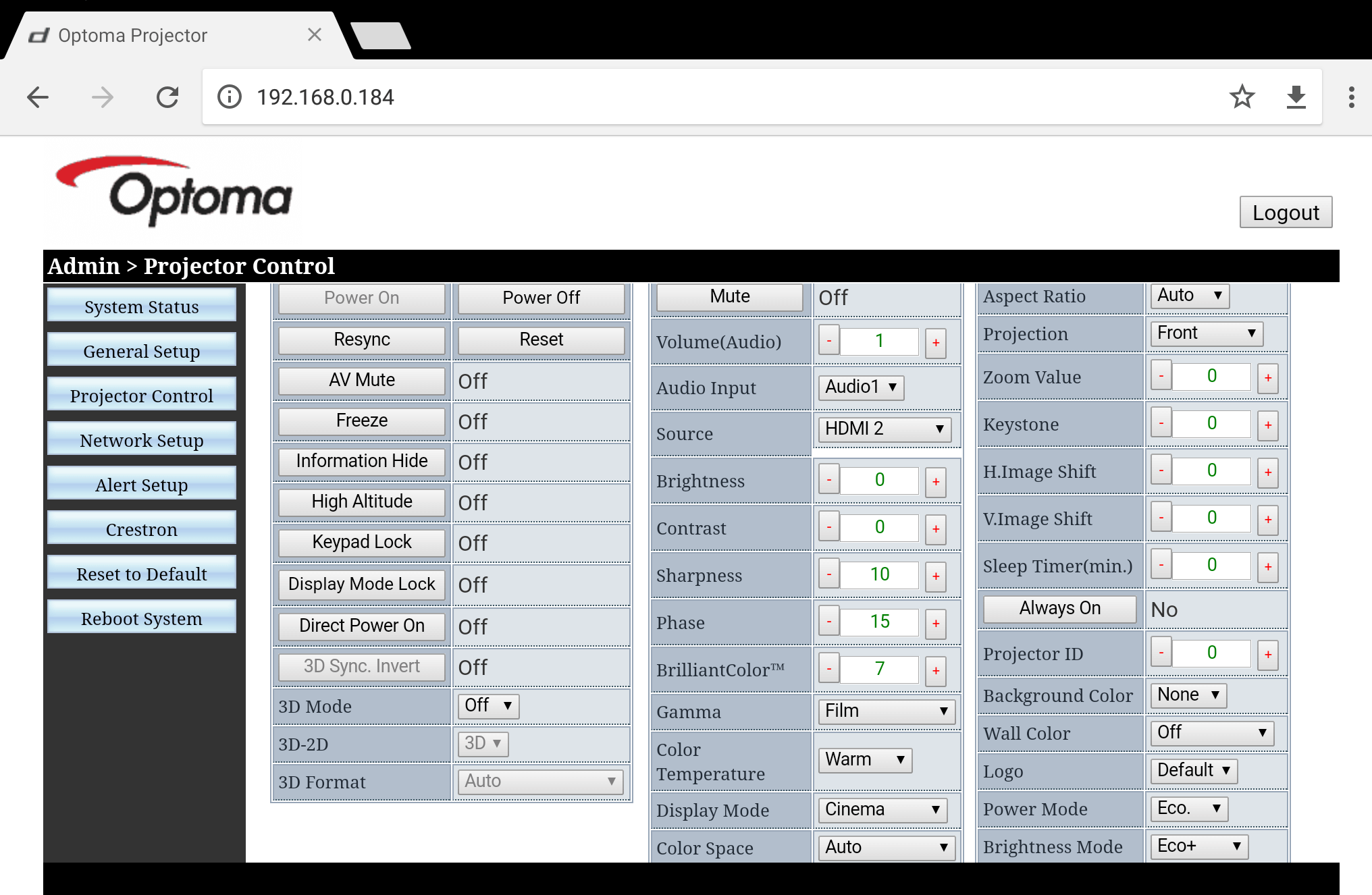 That’s about it. In summary, the EH400+ comes across as a solid DLP workhorse that will perform well in professional environments, displaying presentations and media to a high standard with good colour reproduction. Priced at just under GB£750 inc VAT, this is definitely business territory and would be a good choice when replacing a legacy projector with a more up-to-date unit and more relevant connections. The network port and web interface is handy too, especially when the battery has died in the remote control.

The EH400+ can be bought through Optoma‘s partners including Currys PC World and Just Projectors. The Currys price seems a little high…

There’s a short video below and I must apologise for there being no demonstration of the EH400+’s projection capability. I didn’t have a suitable projection space and had to use a small screen which was incredibly bright at such a short distance. Suffice to say that the quality is impressive.

Update: I previously described this as a digital LED projector. It’s not, as DLP stands for Digital Light Proceessing.

Thanks to Optoma for the loan of the review unit.