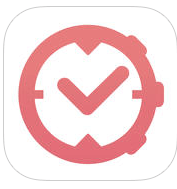 As a freelancer, time tracking is essential to the work I do. I’m always looking for ways to improve that tracking, so I’ve been trying out different apps lately to help with the task. One of this apps is called aTimeLogger 2. There are some previous versions of aTimeLogger for other platforms. But aTimeLogger 2 is only currently available for iOS and I’ve used it exclusively on my iPad Mini. The app sells for $2.99 in the App Store but I was able to pick it up for free during a special promotional period.

aTimeLogger 2 is pretty straight forward when adding a task. The app opens with a screen that allows you to select from different task categories. aTimeLogger 2 is designed to keep track of EVERYTHING you might do in the course of a day; working, eating, exercising, sleeping, etc. I’m only interested in using the app for work projects, so I selected the Work option from the menu below. 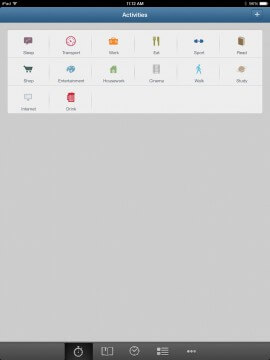 This automatically added a new task at the top of the screen with a new timer that had already started rolling. 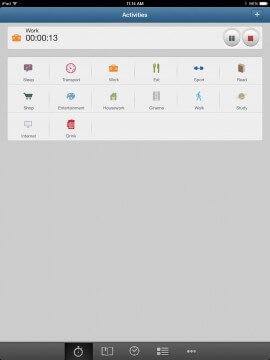 Tapping the task takes me to a screen that allows me to add some details to the task. The “Type” section was already set to Work, as I selected that on the previous screen. If I wanted to change it to something else, I could do that here. The “My plan” feature has something to do with combining different tasks into a plan. This feature seemed confusing and since I really didn’t need it, I didn’t try to figure it out. I did however use the “Comment” field as a way to give my tasks unique names that made them easier to identify. 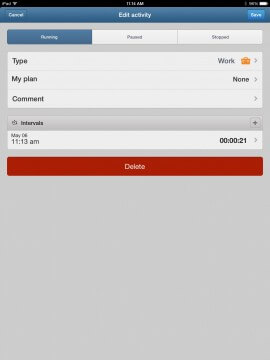 This screen also keeps track of any time I’ve added to the task so far and it also has a delete button for removing the task completely from the app.

Tapping the Save button in the upper right-hand corner took me back to the main aTimeLogger 2 screen. I added an additional task just to show that the app allows you to keep track of multiple projects at the same time. 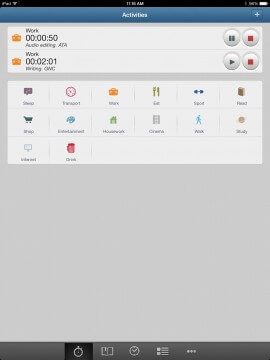 Note: While you can keep track of multiple tasks as shown above, aTimeLogger 2 can only one run timer at a time. I think this is by design, since the app breaks everything down into task categories and the assumption is you probably won’t be doing more than one task at a time.

From here, you can pause tasks and restart them again as needed. This is crucial for the type of work I do, as projects are not always done in a single block of time or on a single day. This is really all I used the app for, and for the most part, it did this well. However, I did notice sometimes that the timer would jump ahead in time when adding details to the Comment fields of tasks. It was easy enough to fix this when it was caught right away. But it was confusing at first, as I noticed some tasks had already logged more minutes (sometimes even hours) than I could’ve possibly used since adding the task to aTimeLogger 2. Once I figured out it was doing this, I just had to tap on the timer and reset it with the “Now” button. Fortunately, this problem only seemed to appear when initially setting up a task. This problem never arose when adding more time to an existing task.

At the end of a tracking period, aTimeLogger 2 will allow you to export all of your tracking data to a CSV or HTML file. Again, all I wanted the app to do was track my time in the Work category. But because it’s designed to track all of your time, there’s no way to remove that pesky “Other” category from the export results. 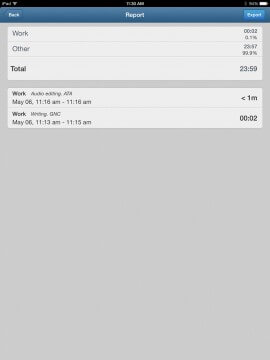 aTimeLogger 2 has settings and feature beyond what I used it for. For example, you can connect it to Twitter if you’d like the app to tweet when you’ve started/completed a task. You can also change the theme of the app if you’d like it to look different from the default layout (which was perfectly fine for me).

I used aTimeLogger 2 for one month’s worth of task tracking. And while the app is OK, I have trouble recommending it, mainly due to the timer issue I mentioned above. But, if you don’t mind a little babysitting when you first add tasks to the app, or if you’re super interested in timing EVERYTHING you do in the course of a day, aTimeLogger 2 might work well for you.