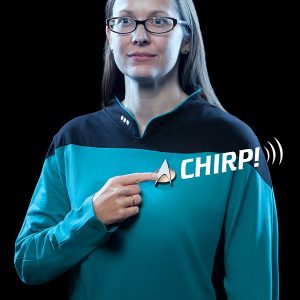 ThinkGeek is selling an exclusive Star Trek: The Next Generation ComBadge that is more than just a prop. This one actually has some functionality!

The Star Trek Bluetooth ComBadge is an officially-licensed communicator badge. It hooks up to your phone or device via Bluetooth, and has a built-in microphone for hands free calling. Connect it to your phone, tap the badge, and you can answer or send calls, play or pause audio, or access Siri, Google Now, or Cortana.

The badge plays a communicator sound effect when pressed. Keep the badge charged via a micro-USB charging cable.

The ThinkGeek website notes that the specifications are subject to change pending licensor approval. The Star Trek TNG Bluetooth ComBadge is priced at $79.99 and is coming in November of 2016.