Today Google and hardware maker Acer announced the latest Chromebook laptop, following closely on the heels of the recent Samsung release.  Once again, Acer has undercut Samsung on the price by offering a $199 notebook and beating Samsung by $50.

The Acer notebook has been officially named the C7 and packs some impressive specs given the price.  It has an 11.6 inch display, Intel Core processor, boots up in 18 seconds, a 320GB hard drive, 1080p video and 100GB of free storage on Google Drive.  The only knock here may be a rather poultry 3.5 hours of battery life.  On the other hand, it’s a pretty thin device that resemble today’s popular Ultrabooks. 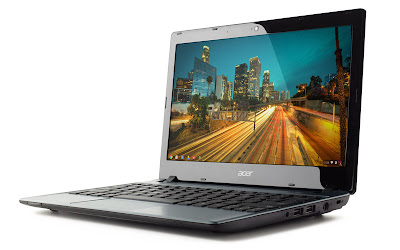 While Chromebooks only run the Google Chrome operating system and aren’t compatible with traditional software like Microsoft Office, they make up for this in speed and simplicity.  The cloud storage is handy and services like Google Docs and web apps make up for this as well.  Plus, if you just can’t live without Office then you can still access it using Office Web Apps or Office 365.

So, will these recent offerings from Samsung and now the even cheaper one from Acer be enough to make you switch?  A full notebook computer for the price of a Nexus 7 or Kindle Fire HD is certainly going to be tempting.  Plus, Google has been fast at work updating and improving the Chrome OS and things will only get better from here.

One thought on “Acer Announces $199 Chromebook, Can You Still Resist?”