It is not unheard of for players who have been banned from playing a video game, due to their own bad actions, to get online and complain about it. Blizzard Entertainment, maker of World of Warcraft (WoW) recently banned players who were using bots. One of those players felt the need to post a petition at WhiteHouse.gov about it.

It is against the Terms of Use of World of Warcraft for players to use bots. A bot can be described as “third-party programs that automate gameplay.” In short, players who don’t actually want to spend time playing a video game sometimes choose to use a bot that plays it for them. Or, a player might choose to use a bot in order to make certain aspects of the game easier for them. The reason doesn’t actually matter since the use of bots breaks the Terms of Use.

Blizzard Community Manager Lore posted some information about the ban on the World of Warcraft forums. The title of the forum post was “Recent Actions Against Botting in WoW”. It said (in part):

As I mentioned, it is common for players who have been banned to go online and complain about it. Many will claim they were innocent and that Blizzard should reverse the ban. Others will insist that the ban was “unfair”. This is a fairly typical response.

This time, someone decided to take things a step farther and create a petition on WhiteHouse.Gov about the WoW ban. The petition is titled: “Today on 5/13/2015 The World of Warcraft Population demands unbanning their toon and to change the terms so we can play.” The “toon” they are referring to is the character they use when they play World of Warcraft.

The wording of the petition says: Today over half the pvp community that did not use their fingers to play have been banned. The other half were people who would use a program called T-Morph to do stupid things…Anyways we are demanding Blizzard to change their terms of service and fix this game so we can play again. WE do not want to see any lives lost due to A ban.

Please help us change this

Blizzard you are ruining everything 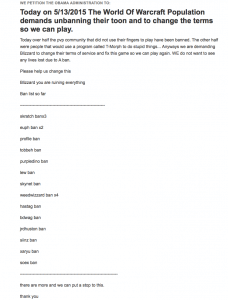 I find it interesting that the banned players who created or signed the petition think that this is a situation that the Obama Administration should step into. The creator of the petition connected it to the following issues: Economy, Human Rights, Technology and Telecommunications.

I’m fairly certain that being banned from a video game, for using a “bot”, is not actually an infringement upon one’s human rights. The wording of the petition can be read as an admission that the players who were banned did, in fact, use a “bot”, including one called T-Morph.

Perhaps it shouldn’t surprise me that the creator of the petition failed to follow the Terms of Participation required by those who post petitions. For example, part of it reads “You also agree not to post threats of unlawful violence or harm to any individual or group”. One could interpret the part of the petition that says “WE do not want to see any lives lost due to A ban” to be a threat of unlawful violence that could occur if Blizzard doesn’t reverse the ban.