In very unwelcome news, Dark Sky has sold out to Apple, with the Android and Wear OS apps closing down on 1st July. As far as I’m concerned Dark Sky is the best hyper-local weather app: if I get a notification it’s going to rain in 5 minutes, it’s going to rain in 5 minutes. It is (was) perfect for checking whether to take an umbrella on a stroll. 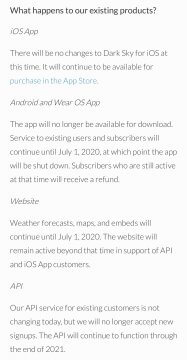 I’m delighted for the team at Dark Sky – I’m sure they’ve made a few bob – but I’m disappointed by the sheer pettiness of Apple in dropping the Android version so quickly. Undoubtedly other products have been bought by major tech firms only to be later closed down (Microsoft has strong credentials here – Sunrise Calendar and Newton Mail come to mind) – but it’s Apple who loves the platform lock-in.

Apple might make luxury hardware and have a great range of apps, but the lock-in is shocking. My jaw dropped when I recently realised you can’t set a default browser or email app. Seriously? This is the kind of stuff that got Microsoft in trouble back in 2007. Google might discourage the downloading of apps from sources other than the Play Store, but you can do it. Can you do that on an iPhone and or iPad? Nope, not at all – only Apple-approved apps are allowed on your iDevice.

I live on California’s Central Coast. We’re in the midst of the rainy season here and weather patterns are often unpredictable, with overcast days that could produce a downpour at any moment. It’s tough to know when it’d be a good idea to bring an umbrella or leave it behind. Fortunately, the makers of Oombrella are working to change that.

Scott met up with Clement Guilot of Oombrella. Clement showed off the Oombrella chip, a small device that monitors the weather around you and also pulls in weather data from other sources to give you the most accurate meteorological predictions possible. Oombrella sends notifications to your smartphone to let you know if you should bring your umbrella or leave it at home. Oombrella also uses Bluetooth to notify if you accidentally leave it behind. So, you’ll never lose another umbrella! The product is still in the planning phase but Clement is optimistic it’ll be in users’ hands by Fall of this year. Oombrella should retail for around $85 but backers to an upcoming Kickstarter campaign will be able to get the device at a discount for $65.

These days it’s either i-this or smart-that with new gadgets measuring and changing our personal environment. From Fitbit to Philips Hue, the internet of things is steadily growing and into this increasingly connected world, French firm Archos have stepped in. Their Smart Home tablet wirelessly connects sensors to a central hub that monitors and initiates actions based on conditions. Archos kindly lent me a Smart Home to raise the IQ of my house. Let’s take a look. 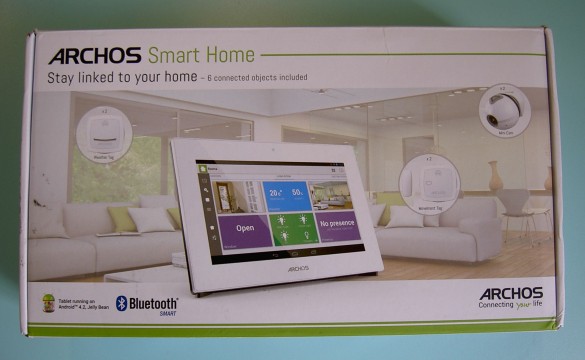 In the box there’s the Smart Home tablet, plus six connected objects; two mini-cams, two movement tags and two weather tags. The tablet itself looks much like a digital photo frame but it’s actually a small 7″ device running Android 4.2. 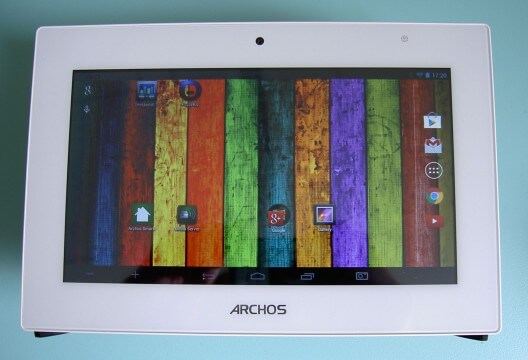 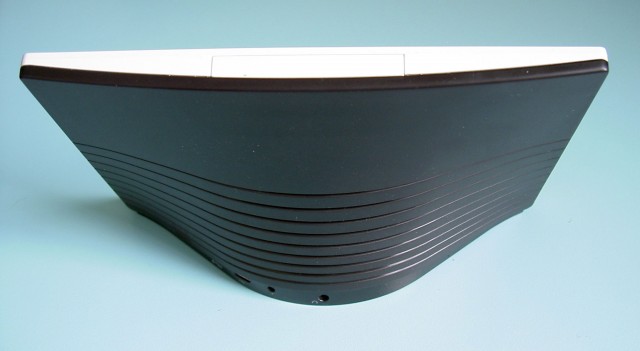 In the looks department, the Smart Home tablet fits the bill with styling that wouldn’t look out of place in a living room. It is all plastic, including the screen which seems to be acrylic rather than glass, but perhaps will better withstand being knocked. Some thought has been given to the design as the screen’s viewing angle appears to be have been adjusted slightly so that screen looks good when someone looks down at it, rather than straight on. There’s only about 2.5 GB of free memory on-board but there is a microSD card slot to boost the Smart Home’s capacity. Performance-wise, it’s no speed demon with a 1.2 GHz ARM processor, but as most of the time the Smart Home just sits there receiving data, it’s a not a big deal. A camera and a thermometer are built into the tablet too and these can be used to take pictures and measure the temperatureas well as the connected objects.

The connected objects are shown below with the mini-cam, weather tag and movement tag from left to right. All have sticky pads which allow adhesion to flat surfaces round the house. The mini-cam ball is held in the foot by magnets and it means the ball can oriented in almost any direction. The weather tag measures temperature and humidity, and the movement tag can measure both motion and door opening / closing. 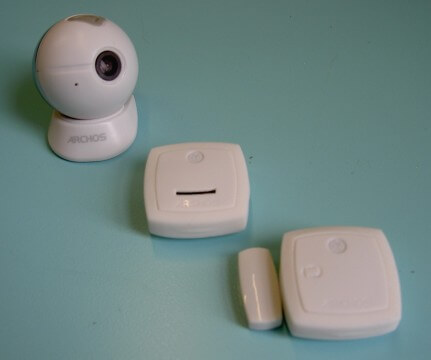 Getting setup is easy and straightforward. Running the Archos Smart Home software initially asks for the different rooms where devices are located. 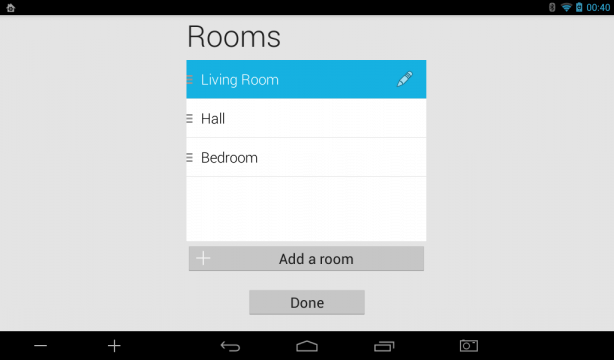 Once the rooms are setup, the connected objects can be added into the relevant room. The objects use Bluetooth rather than Zigbee and pairing is simply a case of holding down a button on the connected object for 5 seconds. It worked flawlessly. The pairing screen shows all the objects available, not only the ones in the box. 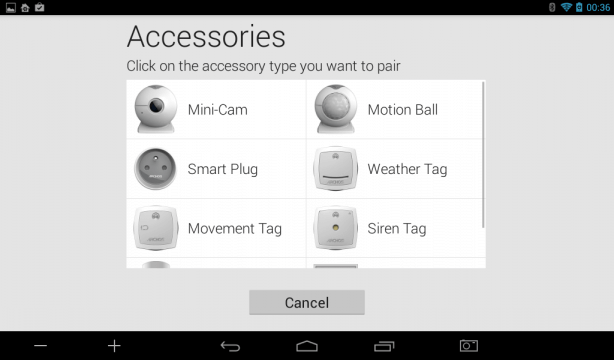 Once all setup, the Smart Home tablet presents a view with the room and all the objects in the room. 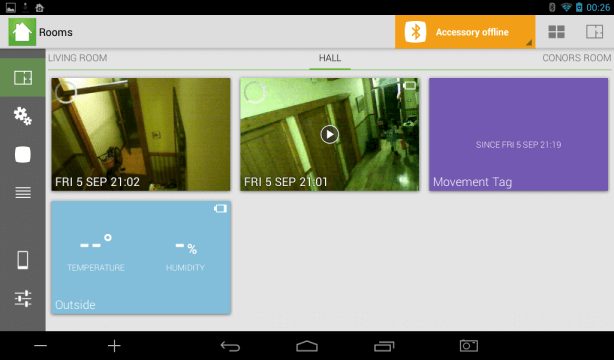 In the Hall, I had two mini-cams, a weather tag and a movement tag. Tapping on any device in the app then gives more data or information – here’s the weather tag showing data over the past week for both temperature and humidity. 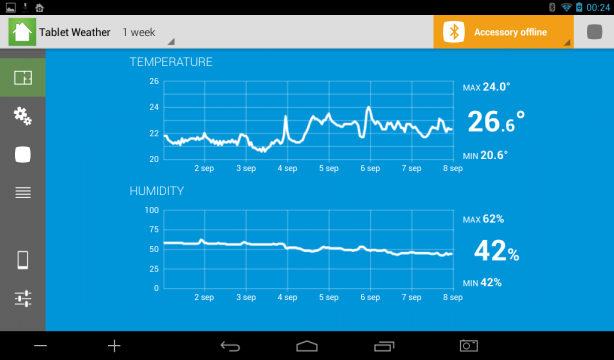 Great but how do we get from monitoring the weather to doing something smart? Archos have the answer by building simple “if this, do that” programs. For example, if temperature falls below two degrees Celsius, email to me “It might be slippy.” Or more usefully, if the door opens, take a picture and send an email – like this. 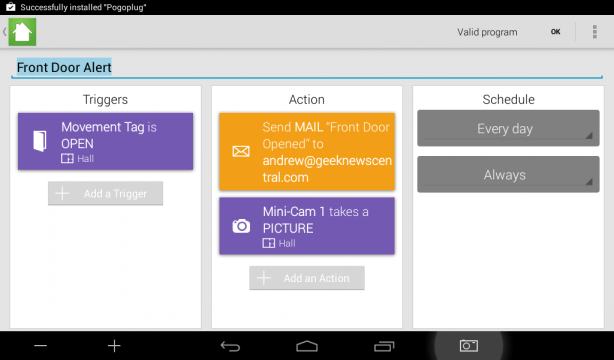 Sure enough, when the front door is opened, I get an email (my personal email is address is obscured by the black box). 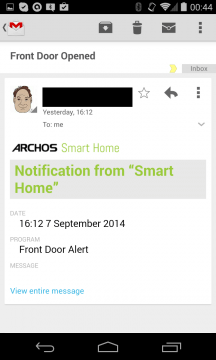 The mini-cam also takes a picture (or a short video) but they won’t show a live feed, presumably because Bluetooth can’t transfer the data very quickly. You’ll notice one of the slight problems….the Smart Home doesn’t really take pictures fast enough as in many of the photos the person who opened the door has already moved out of shot. These are all real life photos, nothing was staged. A mini-cam positioned further down the hall generally did better at getting people entering the property. 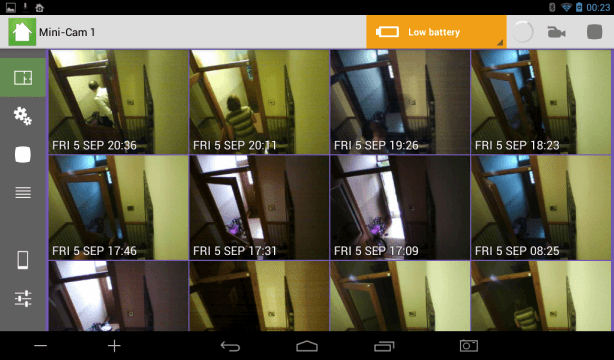 Out of the box, there’s a fairly limited range of actions such as send email, turn on plug and so on, but Smart Home can use the Tasker app to do more. Tasker supports a wide range of actions, including starting other apps, which makes it quite a powerful solution. However, even this simple email-me-on-the-front-door-opening is useful when wanting to know if someone has arrived home safely (or a thief has broken into your house!)

Other nifty features are that the Smart Home can be accessed from other tablets or smartphones. After a straightforward authorisation process, the system can be viewed from other devices both inside and outside the house. Here’s what it looks like on my smartphone. 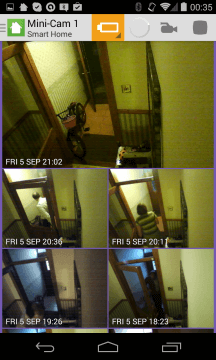 Overall, the Smart Home worked well, mostly sitting on the table doing its job. I did find that I mostly used my ordinary tablet (a Nexus 7)  to work with the Smart Home rather than picking up the unit itself. I set the Smart Home tablet up as a digital photo frame using the standard Android Daydream screensaver to fit into the room.

There were a couple of problems, the first being the range and penetration of Bluetooth. I live in a modest house with brick walls which meant that the weather tag at the rear of the property couldn’t be picked up if the Smart Home tablet was in the front room. Secondly, battery life – the mini-cams seemed get through a set of batteries in about a fortnight and each one took three CR2450 button cells. The movement and weather tags weren’t quite so bad – perhaps a month and only one battery. As an aside there’s no way of muting the low battery warnings that appear in orange on the screen. A connected object could be disconnected but that deleted the historical date at the same time.

Bizarrely, the other problem was how I felt about spying on my family, which is not anything to do with the Archos Smart Home, so I’ll save that for another post. I can see the Smart Home working for families with children that come home when the parents are still at work and the email notifications would give any parent a measure of comfort that their son or daughter is home safe.

The Smart Home costs GB£199 from Archos’ online store. Other additional connected objects are “coming soon”, including an HD weatherproof camera and a siren tag. In summary, the Smart Home is a well integrated system that has room for expansion with more types of connected objects but watch out for the limitations of Bluetooth range and battery life.

Thanks to Archos for the loan of the Smart Home. Okay, the headline may be an exaggeration.  After all, I don’t know if records exist for such things and if they do, I didn’t look for them.  However, be it a record or not, this is still an absolutely amazing natural phenomena.

In Wyoming, recently, a large amount of rain and snow-melt has resulted in unstable conditions.  This, in turn, lead to a massive landslide in the Snake River Canyon, which came down across Highway US 26-89.  Even now, days later, the landslide is still moving at about a half meter (18 inches) per hour.  The Wyoming Department of Transportation has been following it and took a time-lapse video which can be seen below.  To get a sense of scale, pay attention to the man who enters the video and walks around RIGHT ON THE LANDSLIDE.

Over at How It Works there’s a short story about a father and his two children sending up a weather balloon to 19 miles with a video camera on-board.  The camera records all of the ascent and all but 2 minutes of the descent – the battery runs out!

It takes the Geissbuhler family eight months of planning and it’s a great testimony to what can be achieved by enthusiasts.  It certainly helps that the miniaturisation of technology has allowed GPS and hi-res video cameras to be encapsulated in tiny devices such as mobile phones.  However, this shouldn’t take away from their achievements.  Here’s the video.