The Wearable Technology Show is back next week in London, UK, but sadly I’m not going to be able to attend this year. Co-located with both the AVR360 and Digital Health Tech shows, it’s a great event to see some of the latest innovations from and for the UK market. Over 3,000 people will attend so it’s not CES, but it means there’s much better opportunities for conversation and networking.

I will be bringing some of the announcements from the show to GNC but here’s a sneak peak of some of the speakers, events and new products that will be on show at WTS2019. 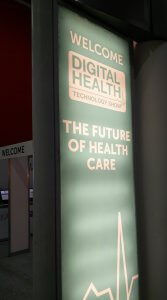 On the technology front, there are over 200 speakers on the conference programme with representatives from McLaren Applied Technologies – they’re putting F1 tech into other industries, GB Boxing – who are using wearables to improve safety for their athletes, and Sky Sports – who want to provide more information to their viewers about their favourite teams as they play.

On the show floor there are 50 exhibitors from 15 countries and a few new products have been pre-announced.

I’m looking forward to seeing what else will be announced at WTS2019.

There’s no doubt that wearables are where it’s at right now, but devices such as Google Glass or Recon goggles are very much luxury toys. XOEye Technologies have taken a more practical approach, developing safety glasses with built-in video cameras and microphones for use in business, typically manufacturing, construction and field service industry. Don and Todd talk to Aaron Salow, CEO of XOEye.

Currently in the prototype stage, the XOEye solution streams HD video and sound from the glasses across the internet to a remote viewing station, where an expert can review and discuss what the wearer is seeing, usually in an attempt to solve a problem. The wearer can hear the expert through small speakers installed on the glasses, so a conversation can take place between the wearer and the expert. Although still in the early stages of development, XOEye is exploring different materials for the glasses and a range of additional sensors, such as gyros and accelerometers, and other enhancements including a torch.

The final product is expected to come to market in June and there’s more information at www.xoeye.com.

Wearable technology is everywhere. From the wrist, to the glasses, to the… hair?

Sony applied for patent US 20130311132 A1 in 2012 and was published on November 21st of this year. It’s a wig with wearable technology inside. The wig covers the head and sensors provide input data and communicate (via wireless).

The patent doesn’t state why Sony wants to put sensors in wigs, but it does provide Sony an overall patent for the idea. Application of the wig can be figured out later.

The wig could be fashioned with different types of hairs from fake hair, to human hair and even horse hair.

Maybe it monitors your head? The head is a major point for body heat. It also is closest to the brain – so a EEG device could be a great idea for the wig. Great for anyone who is a cancer patient.

Of course, there is always a telepathic option for smartphones. Sony might even have an idea with their tablets, PS4 or another device. Nonetheless, Sony seemed to have cornered the smart wig market…