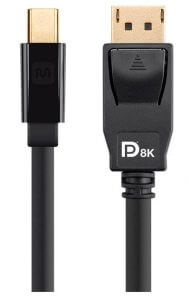 With HBR3 already available in a wide array of consumer products, including GPUs and monitors, the availability of cables that have been certified by VESA to support HBR3 provides a crucial final link to the ecosystem.

VESA is also currently engaged with its members in the development of the next DisplayPort standard generation, with plans to increase the data rate enabled by DisplayPort by two-fold and beyond. VESA plans to publish this upgrade within the next 18 months. Further developments in display interfaces are needed to address future performance requirements of traditional displays, such as beyond 8K resolutions, as well as greater enhancement of the user experience with AR/VR displays, including 4K-and-beyond VR resolutions.

Todd Cochrane talks with a Bill Lempesis, Executive Director of the VESA video standards organization. VESA now has 235 members and is currently concentrating most of its efforts around DisplayPort, a digital display interface standard.

They discuss the current state of acceptance of DisplayPort. The new USB-C port is expected to carry DisplayPort video on a wide variety of mobile and other products in the near future.

VESA, the Video Electronics Standards Association has been responsible for defining many video-related standards, starting with SVGA in the late 80s. More recently VESA has been defining and promoting DisplayPort, the latest video interconnect. Andy and Dave chat to Craig Wiley, VESA Chairman, to understand the technology.

In developing DisplayPort, VESA has worked to ensure that the standard meets the needs of the modern user. The standard allows for multiple screens at high resolutions and the aim is to replace VGA, DVI and HDMI with a single connector. Cleverly, DisplayPort has backwards compatibility with the legacy devices as the DisplayPort itself is powered, so cable adaptors can be used to convert the signals to an older connection types.

Moving forwards, the basic DisplayPort can drive a 4096 x 2048 display with 30 bit colour depth at 60 Hz. Other resolutions and bit depths are possible but there’s a trade off between resolution and bit depth as it’s the overall bandwidth that’s the constraining factor. DisplayPort v1.2 also supports the daisy chaining of video displays, which is pretty cool.

Interview by Andy McCaskey of SDR News and RV News Net, and Dave Lee from Waves of Tech.