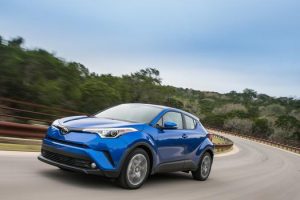 Toyota believes that hydrogen is the future of the automotive industry. They have created a concept vehicle called the FCV Plus, which demonstrates Toyota’s vision of a connected, sustainable hydrogen society.

Nakia spoke with Product Specialist for Toyota, Maggie Clark, at CES 2016. They talked about Toyota’s FCV Plus. It is a concept vehicle that uses hydrogen fuel cell technology that Toyota has been working on since 1992.

The fuel cells themselves are very advanced. When it is time to replace your vehicle with a new one, you could remove the fuel cell stack and continue using it as a stationary fuel cell stack that can provide electricity to your home or business.

Toyota is expecting that their FCV Plus concept vehicle will be on the market around 2030.

Nakia Mann is a video host who specializes in covering live events for Plughitz Live.

The two companies also agreed to work together on their existing telematic systems standards and technology. They hope to create a safer, more secure and consumer friendly in-car telematics system. Ford currently has the MyFordTouch and SNYC, while Toyota uses G-Link, G-Book and a new system called Entune. They are only working together on the technology and standards and will continue to develop their own products and systems. This is just a memorandum of understanding and a full agreement will not be signed until next year. Toyota and Ford still remain competitors, but working together in this case make sense to both of their bottom lines. It will be interesting to see how far this cooperation goes and if creates a successful product in the end for either company.

Win a Prize, watch “The Gadget Professor” sign up for the newsletter and send Don some feedback on this new show. You can win a Dymo Label Printer. Lots of parts in Motion. We demo CueToo.com our new media on demand site. New ads campaigns starting next week as well. Next show will be from the Geek on the road.

Toyota demonstrated at CES 2011 their upcoming in car technology for higher end Toyota models. We were surprised to find Toyota at CES as they have not had a presence in years past and this is the first we had heard about them bringing Apps and Interactivity to their dashboards.

As far as we can tell they are still in prototype stage and it will likely be some time before we see this in any of their vehicles.

These Sponsors made CES 2011 coverage possible your support of them is appreciated!
Get your 14 day Free Trial of Audible Gold to start Listening to great Books!
Save 25% on 4GH Hosting 1yr Subscriptions Save 25% Promo Code CES2.