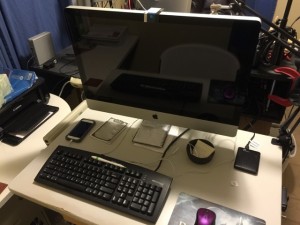 Last week, I wrote about my wife’s broken iMac that’s just barely outside of a special warranty period. That post was meant to be an open letter of sorts. Something I’d hoped would get the attention of someone up high enough on the Apple food chain that they’d reconsider the warranty period and just go ahead and fix the computer. After posting that blog, I sent an e-mail to Apple CEO Tim Cook as well as the Apple corporate PR team, explaining the situation, including a link to that blog post. I was polite and courteous but I did reinforce my belief that Apple should fix the machine, making sure to emphasize that I’d post a followup blog here at GNC, giving the company a chance to pick up some positive “organic PR.” I wasn’t expecting anything to come out of it but I figured I’d give myself 24 hours before throwing in the towel and shelling out the money for the iMac repair. I set a reminder for 1PM the next day to call the service center and authorize the repair, in the case that no one from Apple got back to me.

That 24-hour period passed by with no response from Cupertino. As soon as my phone chimed with that 1PM reminder, I called the service center and gave them the green light on making the repair. And then about five minutes later, it happened! My phone went off with an incoming call. I immediately recognized the phone number because I had seen it the day before. It was the Apple corporate office. It worked! I thought. My message got thru to someone at 1 Infinite Loop and they’re gonna do it! They’re gonna fix my iMac!

I answered the call and was met by the friendly voice of Jessica from Corporate Executive Relations at Apple. She assured me that she was at the corporate office and not at a call center. She said that Mr. Cook had received my e-mail and that he wanted to follow up on the situation. Jessica asked me to recount what had happened so far. I told her how the iMac had died, where we had taken it for service, the diagnosis of a bad video card, and the attempts that were made to get the repair approved thru Apple Care (including my case number, which she already had).

After reviewing things, she said that she was sympathetic to the situation. But, it looked like everything was handled correctly and that she was going to send me an e-mail with specific information on the video card replacement program. So, while the e-mail I sent did manage to get onto Tim Cook’s radar (or at least, the radar of someone in the corporate office), it ultimately didn’t do anything to change my case. With a certain air of disappointment, I thanked Jessica for reaching out and ended the call.

The iMac repair was already in process so there was nothing else to do other than wait for it to be done. I gueess it’s nice to know that Tim Cook, like Steve Jobs before him, has a public facing e-mail address, and that someone is reading it. Overall, Apple is within its rights to deny the post-warranty authorization. But it would’ve been really cool if they’d stepped up and approved it in the face of a technicality. Of course, Apple moves a lot of products and sidestepping its own policy like this could set a dangerous precedent for the company. Regardless, the iMac is now back from the store and working just as good as ever.

Like many people, I converted to Apple products because it represented real value. My first Apple computer was a second-hand Mac Mini with a Power PC processor. I was impressed by the fact that a clearly obsolete machine could remain so useful and usable at several years of age, when other older computers of the same vintage were long gone.

My next Apple product was a white plastic MacBook with an Intel processor, which is now six years old. Impressively, the machine still remains highly functional today.

Since then, I went on to get a seventeen inch MacBook Pro, two Intel Mac Mini machines set up in home theater configurations, two iPod Classic MP3 players, an iPad 2 and an iPod Touch.

Apple purchases were easy to justify. An Apple computer might cost three times as much as a competing piece of hardware, but the Apple operating system could usually be counted on to continue to function years longer than a competing Windows counterpart. Back in those days, Apple machines were also repairable. My seventeen inch MacBook Pro has been repaired twice, and I’ve replaced the battery myself once.

In my mind, the Apple brand represented usability, innovation, and long-term value. It was easy to recommend Apple products to friends and family, because genuine value was present.

Unfortunately, in the past year or so there has been a change. Recent product releases have failed to excite me. New Apple laptop computer designs present hardware that is close to being non-repairable and disposable. Apple has become a high-end disposable Bic computer. In the realm of phones, Apple, once the innovator, is now failing to catch up to competing Android phone features. Apple seems to be preferring to go down the path of suing competitors such as Samsung in a desperate attempt to cling to past glories, rather than continue to experiment and innovate towards future effulgences.

Apple founder Steve Jobs was a brilliant innovator, albeit with some flaws – i.e., he tended to be controlling and manipulative. As a genuine innovator Mr. Jobs was ultimately successful in spite of those flaws, not because of them. It’s been a year since the death of Steve Jobs. I fear the remaining imprint of Steve Jobs on Apple as his personal innovation fades is deteriorating into Apple embracing the skeleton of the dysfunctional parts of the Jobs personality. The genuine innovator at Apple died a year ago. Growing tendencies toward control and manipulation remain. Steve Jobs created an unprecedented amount of momentum, which Apple still benefits from today. Apple, now at its pinnacle has reached unbelievable heights even as there is an unnoticed malignancy.

For me, the thrill is gone. IOS 6 diminished my iPad 2 experience. I rely heavily on Google Maps, including both the satellite view and Google Street View. The new Apple satellite images in IOS 6 are clearly inferior and fuzzy when compared directly to Google’s superior satellite images. Street View is gone. The YouTube app is gone. Apple has embraced Steve Jobs’ desire to punish Google for coming up with Android and daring to compete with the iPhone. The removal of Google Maps and the YouTube app in IOS 6 is a move born out of spite, not innovation. Actions taken out of spite are always a mistake.

In Apple’s more humble past there has always been a core of users, often dubbed the “Mac Faithful” that would stick with Apple and buy their products no matter what. In recent years, under the renewed leadership of Steve Jobs, Apple was able to finally move into the mainstream, picking up a vast bulk of new customers that lack this zealous loyalty. People like me were enticed to buy Apple products by the genuine value they offered.

As a long-time consumer of technology, I lack this Apple zealoutry. My loyalty extends only to products that offer good value. I can only speak for myself, but at the present time I don’t see myself buying any additional Apple products anytime soon. I am wondering how many other recent Apple customers share my lack of loyalty?

What has befallen Apple is unfortunate. It was always fun watching the presentations of world-changing innovations. These days, not so much.