Recently, the New York Stock Exchange (NYSE) announced that it would comply with Executive Order 13959 and delist China Mobile Communications, China Telecommunications Corp, and China Unicom (Hong Kong) Limited. Since then, NYSE has decided not to delist them.

On January 4, 2021, NYSE posted news titled: “NYSE Updates Guidance on Delisting Determination for Security of Three Issuers in Relation to Executive Order 13959”. From the news:

In light of further consultation with relevant regulatory authorities in connection with Office of Foreign Assets Control FAQ 857, available here, the New York Stock Exchange LLC (“NYSE”) announced today that NYSE Regulation no longer intends to move forward with the delisting action in relation to three issuers enumerated below (the “Issuers”) which was announced on December 31, 2020.

At this time, the Issuers will continue to be listed and traded on NYSE. NYSE Regulation will continue to evaluate the applicability of Executive Order 13959 to these Issuers and their continued listing status.

The three issuers are: China Telecom Corporation Limited, China Mobile Ltd., and China Unicorn (Hong Kong) Limited. To me, it sounds like these stocks can still be bought and sold on the New York Stock Exchange. What changed?

Reuters reported that China will take “necessary measures” to safeguard the interest of its companies after NYSE began delisting three Chinese telecom firms. It also called on the United States to meet China half-way and put bilateral trade relations back on track. To me, it appears that China is hoping that president-elect Biden will have a different relationship with China than President Trump did.

The Wall Street Journal reported that the China Securities Regulatory Commission said on January 3, 2021, that the executive order was for political purposes and “entirely ignored the actual situations of relevant companies and the legitimate rights of the global investors, and severely damaged market rule and order.”

Executive Order 13959 was signed by President Trump on November 12, 2020. According to The Wall Street Journal, the executive order will block Americans from investing in a list of companies the U.S. government says supply and support China’s military, intelligence and security services. The ban starts on January 11, and investors have until November to divest themselves of their holdings.

There are 35 companies on the list – including China’s largest chip maker – as well as surveillance, aerospace, shipbuilding, construction and technology companies, The Wall Street Journal reported.

The Guardian reported that China Mobile Communications, China Telecommunications Corp, and China Unicom (Hong Kong) Limited have the right to request a review of the NYSE’s decision. The Guardian also pointed out: All three firms are listed in the US and Hong Kong, and mostly earn their revenue by providing voice and data services in China. They all have little presence in the U.S.

The delisting of these companies by The New York Stock Exchange is a small part of a series restrictions that appear to be designed to stifle China’s ability to make money from U.S. technology. The various orders either cut off the access of of U.S. technology to several Chinese companies, or by requiring U.S. companies to obtain a license before selling technology to Huawei.

Patrick demonstrates a new force touch or three dimensional touch screen device mock-up, where increased pressure causes different reactions on the screen, such as a heavier line in a drawing. 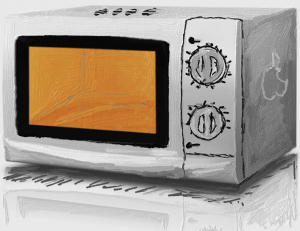 There’s an article that has been making the rounds the past couple of days or so stating that the smartphone will be a dead product category within five years. The premise of the article seems to be based on a consumer “study” that consists of interviewing a bunch of consumers and what is on their personal technological wish lists.

The smartphone as we know it isn’t going away any time soon. As an ultimate and matured convergence device, the vital functions smartphones are now being used for cannot and will not be replaced by some vague “machine learning” unspecified magic technology that will somehow suddenly appear and take over. At risk of being a stick in the mud, the real world doesn’t work that way. Forms can change, but basic needs that those forms fulfill remain stable.

For one small personal example, I frequently have to send business documents to my company. Back in the old days, this involved putting paperwork into pre-addressed, pre-paid postage company envelopes and dropping them into a mailbox, ultimately hoping they did not get lost in the mail. Later on, it evolved into companies that would overnight the paperwork back to the office. The next step in the evolution involved scanners hooked to computers with data connections. The final step in this evolution involves smartphones. I simply use a special dedicated smartphone app that takes a picture of each document, automatically corrects for the inevitable skewed image distortions, and turns the document photo into a black and white image that you would swear was scanned in a traditional scanner hooked to a computer. It packages these documents together, asks for a bit of additional identifying numbers, and then instantly sends the documents off to the company. I get an instant email receipt notification on the same smartphone letting me know the documents were successfully delivered to my company. This sort of functionality cannot and will not be replaced by some sort of pie-in-the-sky neural interface or voice-activated clothing. Let’s get real.

I recently purchased a new kitchen range that cost about the same amount as a high-end smartphone. Kitchen ranges have been around forever. They have had multiple doses of technology applied to their functions in an attempt to reinvent and reinvigorate the product category. Even with this injection of microprocessor technology, kitchen ranges are still appliances. Millions of people have to buy them, and they come in a wide variety of forms, from the low end to the high end, as fashionable and as expensive as you want. But they are still appliances. When was the last time you got excited by your microwave oven? Thought so.

Smartphones are rapidly in the process of turning into pocket appliances. They are extremely useful, and almost everyone you see has one and is constantly interacting with it. Nonetheless, it is turning into just an appliance.

Home appliances have varying lifespans that can kick out to 20 or 30 years depending on the quality of the item. As a pocket appliance, smartphones are under a lot more physical stress and need to be replaced much more frequently than refrigerators, cook stoves and washing machines.

It turns out that always having a high-quality internet-connected camera/computer in one’s pocket is incredibly useful. “Machine learning” isn’t going to replace that camera, nor will it replace the constant necessity to look up people, places and things and interact directly with them in real time during the day.

Five years from now, smartphones will still be around in very much the same forms they are today. It is likely we will be on average be keeping them longer. No longer a novelty, they are just a necessary appliance that will require periodic replacement.

Time to get those clothes out of the washer and put them in the dryer.

The Oppikoppi Festival has been taking place in South Africa every year since 1995. It is a big music festival. For this year, the 19th year of the festival, they are going to be trying something new to help distribute beer to the people who attend.

According to HypeBot the festival will make use of small drones that will deliver beer directly to the person who ordered it. He or she won’t have to walk away from the music, and stand in a long line, in order to purchase a beer.

Instead, a small, 8-propeller helicopter drone, that has been loaded with beer, will fly over the festival and locate the person who ordered a beer. The drone will then drop a single beer, which has been attached to a small parachute. Use your smartphone to order the beer, and stay put. The beer will come to you!

This year, the Oppikoppi festival planners are intending to have people hand guide the drones. In other words, the drones won’t be functioning without a human guiding them along behind the scenes. If things work out well, there is potential that other large, outdoor, music festivals may decide to use some beer delivery drones.

Teams of five (or more) high school girls can enter. All they need is “a safe place to meet, a laptop with internet and a smart phone”. It doesn’t cost any money to enter the Challenge. A curriculum is provided to the teams to help them through the process. Every year, a theme is selected for the Technovation Challenge. For 2013, girls needed to develop an app that solves a problem in their local community. They can focus on a health problem, a social problem, or a lack of resource.

This year, there were 115 submissions. You can check out a complete list of the finalists. One that caught my attention is a team from The Nightingale-Bamford School in New York City. The team of high school girls have created an app called “Arrive”.

The purpose of the app is to allow girls to use their smart phones to check into school. Administrators can use the app to view student attendance by class and last name. Parents can opt-in to having the app send them a text message when their daughter arrives at school.

This would replace the school’s current check in system, which uses plastic ID cards and countless paper attendance sheets. Instead of having students gather around one check in point, “Arrive” would let them scan a QR code (which can be placed in many locations). The video below shows the girls as they explain more about what “Arrive” will do.