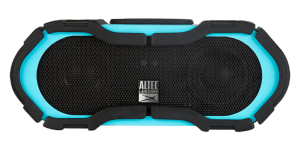 The BoomJacket speaker is priced at $199.00 and is IP67-rated waterproof, sandproof, shockproof and snowproof construction. It is also floatable and submersible and has a 50 foot Bluetooth range. It has a 40 hour battery life at spoken word volume level. The BoomJacket also features a built-in universal mounting mechanism for easy attachment to equipment and structures like bikes, kayaks, jet skis, and motorcycles.

Manchester-based Otone Audio might only be a few years old but they’ve been busy producing a neat range of audio products from soundbars and headphones to speakers and digital radios. It’s impressive what they’ve achieved in such a short period of time.

At Gadget Show Live, Otone demonstrated a selection from their line-up including the BluWall speakers and the BluMotion radio (lower shelf) plus the Blufiniti and SoundBase II soundbar (upper shelf). It’s hard to get a good listen in the hustle of a trade show but initial impressions were good. 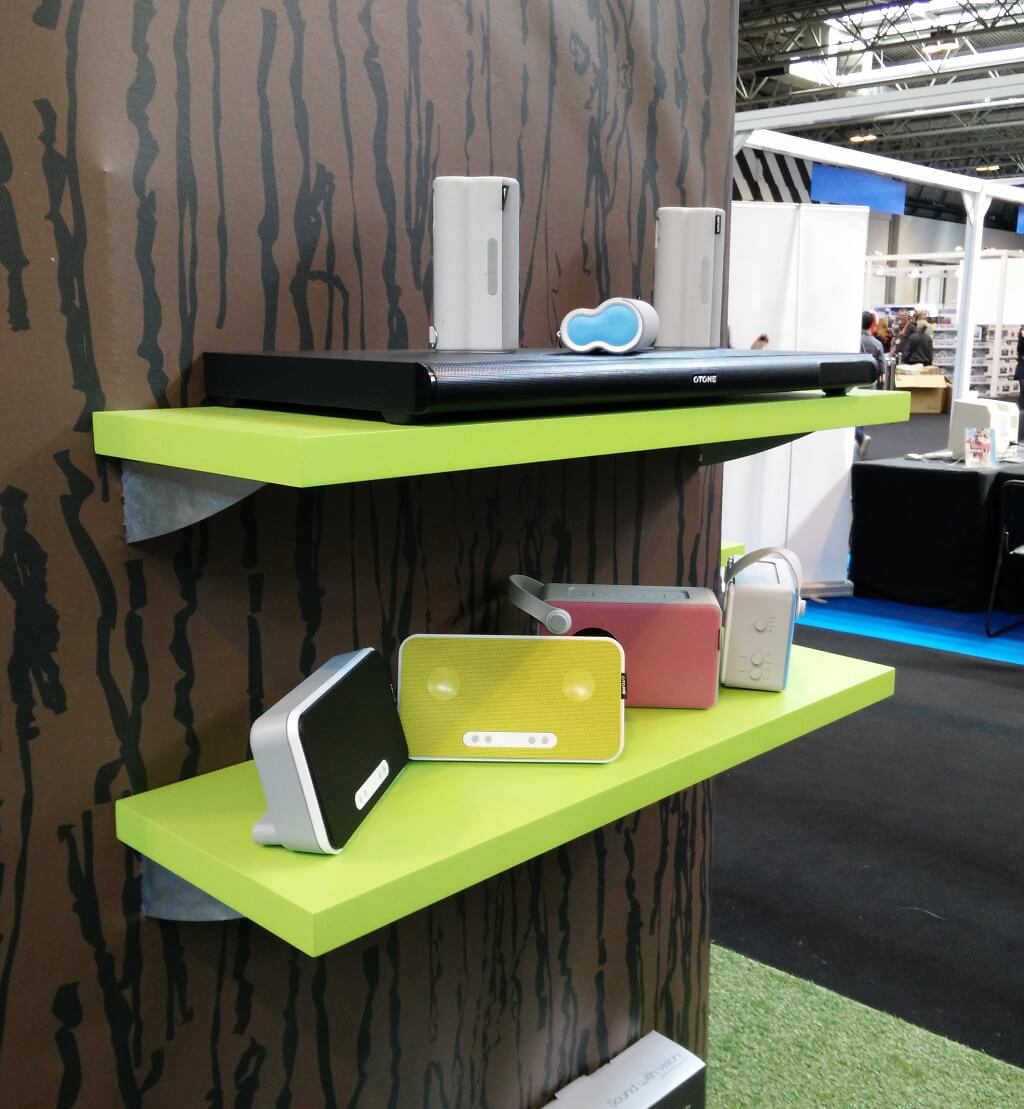 The Blufiniti portable Bluetooth speaker comes in a range of colours and is priced at £49.99. To learn more, listen to my interview with Shruti from Otone (sorry about the background noise from a neighbouring stand.)

With the invention of portable media players and earbuds, music listening moved from an inherently social event to an isolated experience. The problem has only been exacerbated over time, as boomboxes and portable stereo systems have fallen out of favor with consumers. aiFi is a new speaker system that’s looking to bring music back out into the open.

Scott met with Fredrik from aiFi. Fredrik explained that aiFi is a unique speaker system that can be used in multiple ways. One aiFi speaker works just fine on its own. But when it’s stacked with another aiFi speaker or setup with two or more other aiFi’s, the speakers will configure themselves, depending on the location of each aiFi. For example, stacking two aiFi’s will increase the bass response of each unit. Or, three aiFi’s could be placed together to create a sound-bar system for TV viewing. aiFi speakers accept input thru either bluetooth, optical line-in or standard audio line-in, so these speakers can be used with nearly any type of sound source.

Electronics and water. Two things that just don’t go well together. And while it’s easy enough to keep your electronics dry at home, what about those times when you’d like to play some music or listen to a podcast at the beach or next to a swimming pool? Altec Lansing has a new line of waterproof bluetooth speakers that you can use virtually anywhere.

Scott had a chat with Jill from Altec Lansing. Jill showed off an impressive array of products from the company’s “jacket” line. Starting wit the Mini h2o Jacket ($39.99) going all the way up to the Boom Jacket ($199.99), these speakers are wireless, waterproof and highly durable. All of these speakers are also designed to float, so no worries if they’re dropped into the ocean or knocked into a pool. Altec Lansing even put these speakers thru a series of tests, including fire and bullets. And each time, the speakers came thru, still working as expected.

When it comes to smartphones and tablets, there are few mobile devices that produce anything like a decent volume and as for stereo separation, forget it. Fortunately Peri can come to the aid of iPhone owners with the Peri Duo, a high-power wireless speaker and phone charger case. Todd and Jamie find out more from Cedric Sumimoto, co-founder of Peri.

The Peri Duo is a standalone wi-fi and bluetooth-enabled speaker and iPhone charger case all in one. As expected, music can be streamed via AirPlay but the iPhone doesn’t have to be in the case when playing the music, so the Duo speaker can be on the opposite side of the room while the iPhone is safely in a pocket. Even better, more than one Duo can be connected to a phone so one Duo can be assigned as the left speaker and one as the right. Alternatively, one phone can multicast to dozens of Peri Duos, which really gets the party going.

The battery is 2500 mAh which will fully recharge an iPhone once with a bit over, or else the Duo will play music for around 4 hours.

The Peri Duo will be available for the iPhone 5, 5s, 6 and iPod Touch. The MSRP will be $139 though it’s currently on pre-order at $99 via Indigogo. Deliveries are expected from April onwards.

Acoustic Research has expanded their speaker series with the launch of four new indoor/outdoor speakers for Spring of 2015. The new lineup includes quality Bluetooth speakers at prices to fit any budget and style. The names of the new speakers are: Hatteras, Glendale, Pasadena, and Orleans.

The Hatteras speaker is $219.99. It is a high-power outdoor Bluetooth stereo speaker system that provides both style and functionality and that can be used all year round. The Hatteras speaker is a 2015 CES Innovation Awards Honoree winer. The design was inspired by America’s lighthouses. This speaker is 2 feet tall, is weather and UV resistant with 40 Watts of yard-filling power. It can illuminate parties with 360 degrees of area lighting and multiple settings. 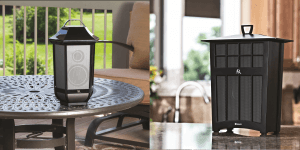 The Glendale and Pasadena speakers are from Acoustic Research’s Premier Series. Each delivers 10 Watts of full-range audio performance for crystal clear sound both indoors and outdoors. They are equipped with Bluetooth technology. Both speakers can be powered via AC. The Glendale is capable of running on AA batteries, while the Pasadena features a built-in rechargeable battery. Glendale will be available for $199.99 and the Pasadena will be available for $99.99. 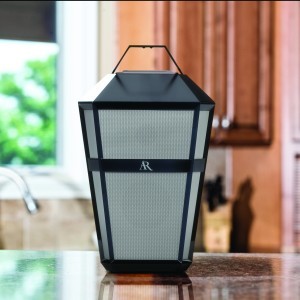 The limited-series Orleans, which is $99.99, features big, bold, three-way sound. You can stream and control your music from your devices using Bluetooth wireless technology or the built-in Aux Input for other wired sources. The Orleans features 10 Watts of high-quality, full, rich, audio performance and has a power span of 10-12 hours using AA batteries.

Visit Acoustic Research in the Central Hall at Booth # 10406 at CES.