There’s a WhatsApp phishing scam doing the rounds here in the UK based on free gift vouchers from big supermarket retailers. It’s doing well because (a) people are receiving the links from friends and (b) they’re disguising the false links with foreign letters.

Here’s two that I received in the last few days. 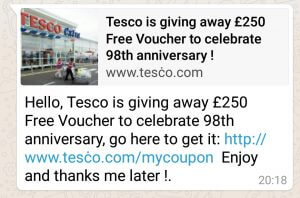 Check the subtle dot over the c of Tesco and the line on the d of Asda. They got my scam senses tingling but many people seem to have fallen for it based on the couple of messages I received. Apparently there’s a variant for Aldi too.

If you do follow the links (and I recommend you don’t), the first part asks for more friends to pass on the message to, and the next bit starts collecting personal info so they can send out the vouchers. Yeah, right. Fortunately, friends I’ve spoken to became more suspicious on the second section and dropped out.

This scam can easily be moved to other retailers in other countries so watch out for it, though the basic scam has been around for awhile. It’s the use of special characters that seems to be new. I imagine that they can be creative with other letters in addition to c and d. More at the BBC. 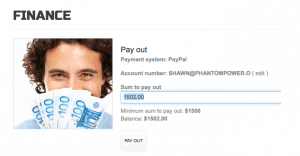 A few months back, I came across an ad in the Gigs section of my local Craigslist. The ad indicated that you could get paid for “reading articles.” As a freelance audio producer, my first thought was that this ad was looking for voiceover talent. I was intrigued by that idea so I figured I’d investigate further. The link in the ad was for a website called Multi Trendo. I could tell that the URL had some trailing stuff on it that looked like an affiliate code. Not knowing exactly what I was clicking, I decided to just manually enter the top level domain for Multi Trendo into my browser’s address bar instead of just using the link that was posted in the ad.

I discovered at the Multi Trendo site that the service has nothing to do with recording audio. Multi Trendo requires users to create an account. From there, they can read a certain number of “news articles” every day and then Multi Trendo will “pay” users for each article they read. Once users have reached a minimum balance of earnings, they can make a request for a payout from Multi Trendo. It was pretty obvious that this website was doing something shady. But it didn’t ask for any sensitive personal information (name, e-mail address only) so I figured there was little to lose in trying it out.

The “articles” available on Multi Trendo are mostly excerpts pulled in thru Google News. Sometimes, you’ll see a complete piece of writing. Other times, it’ll only be partial stories, sometimes with a link back to the source material. Multi Trendo runs a short timer before it’ll let you complete a CAPTCHA and press a submit button as proof that you’ve actually read the article. Each article has a prominent banner ad that hangs over the content you’re supposed to read. Presumably, displaying these ads is the reason for Multi Trendo’s existence.

I viewed enough Multi Trendo articles over the course of a month to slightly exceed the minimum amount that’s required to request a payout. Multi Trendo claims it processes payments thru PayPal, Payza, and Scrill. Having never heard of those last two, I asked Multi Trendo to send my first payment via PayPal. You can probably guess what happened (or, didn’t happen) next.

Nothing. It’s been at least two months. And I haven’t been paid by Multi Trendo, nor have I received any updates on my request. I’m not surprised by this, and I’m not disappointed. Overall, it took only a few minutes every day to look at Multi Trendo’s articles and complete the CAPTCHA’s. But in the end, it really was just a waste of time.

I am sure you have noticed the new strategy with the show content and I hope you like the tighter format. The goal is more insight on the important stuff while at the same time getting you a nice sampling of what you may have missed. This may mean longer rants on some sections of the show and barely a gloss over on other segments. All of this is part of the process I am using to take the show to the next level. Your feedback is welcome. Enjoy todays show! Next show will be road show.. Listen for details.

Fellows you want an immediate trip to the dog house? Listen to hear what I did by mistake on Sunday that has landed me in the dog house in a big way. Your going to get a good laugh on my behalf but I guarantee you will not make the same mistake I made. The show is action packed full of tech, I am reminiscent of some of the reasons I started this show for apparent reasons as you listen today.

Here in Hawaii over the past couple of days a social media war been ongoing. According to a local blog post local Twitter celebrity, Arleen Anderson @alohaarleen with 80,000 followers has had some serious accusations made against her. A war is being waged against her from a lot of well known locals on multiple fronts, and she is fighting back instead of responding to the accusations.

Looking at this from a social media perspective the so called social media expert is not following the social media playbook. She should be setting the record straight because silence just fuels the fire. There have been multiple demands for her to explain the accusations, yet she has not done so which raises more suspicion in my mind.

To add to the drama, court documents from other states that if indeed are linked to her have also been revealed within the referenced blog post. If the documents are genuine then I predict her business and social relationships she has here in Hawaii will never recover.

Court documents, purportedly show she has had to make restitution on at least 2 court cases, and was lucky not to go to jail for 5 years for a conviction for stealing from Special Olympics. The accusations in Hawaii revolve around money as well.

It is obvious that some of the Twitter users that have 80,000 followers have used guerilla strategies by repeatedly following and unfollowing those that do not follow back to build huge follow list. I am not sure how she got 80,000 followers, rumor was she hired someone local to help her build the following. What I think is weird is that her Twitter posts appears to be a lot of back slapping going on. There is hardly any information of value in those tweets, each to his own but the content stream is pretty boring.

Before this story broke few days ago, I had heard some second hand information a month or more ago that concerned me enough to put me on guard.

Going back to December of 2008 I had @alohaarleen, in my studio for a segment on my 2nd annual 24hr Podcast. When youre doing a 24 hr show the content runs together but some of the advice she gave was not what I would expect from someone with 80,000 followers. Obviously there will not be an invite for the 2009 24hr podcast.

Here is where the rubber meets the road, when you endorse someone on Twitter, Linked In or any other social media site, you need to know you could be supporting someone with a questionable background. Some people take their presence on Twitter as a fun social activity, but I take my presence on Twitter, as serious, as my blog, and my business! This event has made me realize that while followfriday is a fun. I will be very careful in the future who I endorse and expose to my listeners of my podcast.

While it is impossible to know the history of people you follow, you can act when you are made aware of questionable character. I waited two days for an official statement, non has been forthcoming. From actions I see in her Twitter stream she has done her best to silence any critic by using @spam and having her followers help silence those speaking out against her.

So the question I ask all of you. Does trust play a major factor in whom you follow on Twitter, and do you follow people that you no longer trust?

Tonight I was working on a website I have not touched in years. I decided to install WordPress on it and went looking for a new theme. Being the Theme directory at WordPress is  useless in actually finding a topical theme I went to Search Google for WordPress Themes to see what other sites are out there.

I found a website with really nice themes that were free. Normally I have paid for each of my themes but I found a great one on the website. I downloaded it, and installed it in taking a close look at the page at the very bottom of the page I was shocked to see three linked url’s led to sites that I would never link to ever!. Here is what it looked like at the bottom of the browser window, believe me you do not want this on your website.

Loading the theme editor and looking at the code in the Footer I found that the author had encrypted php at the bottom of the page. Needless to say alarm bells went off big time and I deleted the theme from the site.

Do not and I repeat do not download WordPress themes from wordpressthemesbase.com they are running a link farm scam in all of the themes I downloaded that will cause you a lot of harm when Google indexes your page.

You may get a free Theme but you will be pretty disappointed when your page rank goes to zero!

Internet e-mail scammers are using the popularity and allure of Google’s Gmail service to phish for personal data, including e-mail addresses and passwords. Gmail e-mail accounts are one of the most coveted holdings for hip and techie Internet users. A quick eBay search proves the popularity of invitations to join Google’s upcoming e-mail service that offers 1GB of mail storage.

The current Gmail phish reads “The Gmail Team is proud to announce that we are offering Gmail free invitation packages to the existing Gmail account holders. By now you probably know the key ways in which Gmail differs from traditional webmail services. Searching instead of filing. A free gigabyte of storage. Messages displayed in context as conversations. Just fill in the form below to claim your free invitation package.”

Dave’s Opinion
Phishing, commonly used via e-mail and the web involve conning unwary users into releasing private data. The cons are best known for their attempts to garner AOL, Citibank, and eBay login usernames and passwords; however, there seems to be no end to how the cons can be applied.