RSS aggregation service Feedly has been working hard to expand its service offerings to make it more of a valuable tool to businesses and power users. Feedly recently entered the next phase of its development with the release of its new Boards, Notes, and Highlights features:

Whatever your motivation, the power of information lies in your ability to harness it. Today we are sharing three new features we hope will make your Feedly experience even better: Boards, notes, and highlights.

As you save more stories, your Boards become libraries of the most important stories you find on Feedly. Everyone can create new Personal Boards. Feedly Teams users will see separate lists in the left navigation for Personal and Team Boards.

Feedly goes on to describe this new feature as:

Some of these new tools from Feedly are available to users of Feedly’s free-service plan. More features become available with Feedly’s different paid-service plans. For more information, click the link at the top of this article.

Dave Winer recently announced the release of the Electric River desktop RSS aggregator for Mac. Electric River was created within the Electron programming language and it uses elements from the open source River5 project.

The Electric River app is a friendly RSS aggregator currently available as a downloadable Mac app (Winer hopes Linux and Windows versions of Electric River will be released soon). More on Electric River from Winer’s blog:

There’s a lot of power in there — it is the full unmodified River5 from the GitHub site. When you lift the hood there’s your Lists folder, Data folder, Rivers folder, all the pieces are there, and all the generality. While we have a UI for editing one list, you can have as many lists as you like.

There will also be a new release of River5 coming with this, with the addition of three new callbacks that allow us to do things a bit more efficiently because the reading and configuring app is running in the same process as the server.

I approached this project once before, a couple of years ago, but I didn’t have enough experience with Electron, Node and JavaScript to trust the result. Now I am reasonably confident that this will work.

I downloaded and tested Electric River on my iMac. The app comes preloaded with a selection of news sources, including NPR, New York Times, Laughing Squid, and more. The user interface (see image above) is dead simple to use, with immediately recognizable controls for adding and removing feeds.

Clicking the Docs tab at the top of the Electric River interface provides quick access to the files that come with the download, for those who want to manipulate the contents of their RSS aggregation at a more advanced level.

Electric River for Mac is available as a free download.

Visiting a website that requires a login, such as music streaming services, for instance, requires an account. That means you need to login. You can use Facebook or Google in most cases, or you could simply create a user name and password. It’s up to you how to handle it, but now there is another option from a rather unexpected player in this game.

Feedly has jumped into the pool of players, adding its own sign in option. Now you can sign in using your credentials for the reader, though it has to be adopted by sites before that happens.

“This means that you have the freedom to keep your newsfeed separate from your social logins, if you prefer to, and get even more control over your privacy. It is an optional feature: If you are happy with your existing login, you can ignore this post and continue to use your existing login without making any changes”, the RSS service announces.

Feedly provides instructions, and you’ll need to start by visiting http://feedly.com/i/logins and then click on “add login” and “add Feedly”. From there you should be good to go.

When Google discontinued Reader it left fans of RSS in a rough spot. Fortunately there were many options to choose from, and new ones sprung up to take advantage of the situation. One service that you may have switched to is InoReader, a popular choice among the big names in the field. The service is more or less continuously updating its offerings, both web-based and mobile.

This time around it’s the mobile version that is getting a makeover. “Today we’re launching the new Inoreader web version for mobile phones – a much richer and better looking successor of our old mobile web version. Now you have the full Inoreader platform with all the content and functionality straight in your pocket”.

The company boasts a more friendly design, better access to menus (they claim to have made this more logical), better, and more mobile-friendly, article viewing and a new dashboard. “If you’re used to starting your Inoreader experience from your dashboard, you can now do that on mobile, too. You can even change your dashboard on the go – just tap the plus button to add gadgets or the gear icons of each section to update it”.

The new version is available now and compatible with all mobile devices. InoReader is free, though there is a premium model for those who require more features. 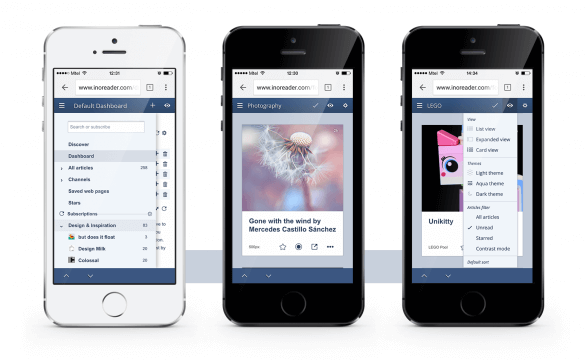 In the time since Google decided to kill off its Reader app, RSS fans have been searching for alternatives. While many landed on Feedly, it is far from the only alternative. Users can choose from options such as The Old Reader, Feedspot and several others. Those who chose InoReader will be getting a new update today, bringing what seems to be a nice new feature.

Bundles aims to bring sharing and easy discovery to users. Sharing has always been possible, but this improves things. “With bundles you can show your favorite sources for everyone to discover. You can share the most helpful blogs on the Internet or the best sources for photography/cooking/design/insert-hobby-here”, the company announces.

Creating a bundle is also fairly easy. Simply head to the Preferences menu and click the new Bundles option the give it a name and customize it with a picture of your choice. Now you can add the feeds you wish to include.

It’s a nice and very simple system. InoReader makes almost continuous updates to its platform. In fact, you can expect updates about once a week, or at least that is how it has been so far.

Earlier this week we learned of a major update to Chromecast, bringing support for ten new apps to the little Google HDMI stick. Now those updates are trickling out to the included services, with support hitting Android podcast app BeyondPod today. This update may feature Chromecast support, but there is more than just that included. BeyondPod is free from the Google Play store, though there is a premium version, as well. There is also a separate app that is designed to support 7 and 10 inch tablets. Now you can ‘cast’ the GeekNewsCentral podcast right to your TV, as well as taking it with you on your travels.

With the death of Google Reader earlier this year, many net denizens were left scrambling for an alternative — and issuing a few choice words to Google upon departure. While countless (exaggeration) alternatives exised, most would up landing on Feedly. In fact, the service did an admirable job scrambling to add bandwidth and servers to face the influx head-on.

While the app does a decent job, there are certainly still complaints to be made about its shortcomings — lack of alphabetical order that results in a chaotic looking feed is mine.

Though that one has not been fixed by Feedly, extension or user script, other tweaks can be made. For instance, how about the ability to add a feed right from the site you are on and without even knowing the RSS address? That is what “Add to Feedly” can do, providing you are using the Chrome web browser.

The extension places an icon in your menu bar that, when clicked from any site, will automatically determine the RSS feed associated with a website and offer you an option to add it to your Feedly subscriptions.

This is one option that helps to soften the Google Reader blow just a bit, by adding a feature that we did not previously have access to in that old RSS program.