Self-assembly robots and smart toys are great for introducing and teaching children the basics of coding. It’s a hot area at the moment, especially with Nintendo Labo coming soon, but here we have British outfit BinaryBots and their animal-themed programmable robots. Todd and Chris play with the smart pets. 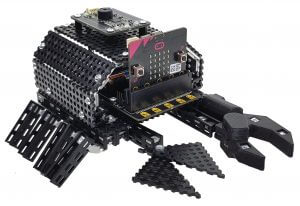 The team at BinaryBots have a range of robotic toys starting with straightforward cardboard-based models through to more complex creations using the Totem construction kits. There are crabs, spiders and tortoises, each will unique actions. The robots can be connected up to a BBC micro:bit computer for coding and programming. Children can code their robot and to see how it responds to light and other stimuli.

The cardboard-based robots are available now with the new Totem-based ones arriving in April. They’re priced at GB£40 / US$55 for the cardboard models and GB£60 / US$80 for the Totem, though you’ll need to buy your own micro:bit for the latter.

We’ve all dreamed of owning our very own robot. Imagine, having a mechanical friend who’s always there and won’t mind when you tell it to fetch another cold drink from the fridge. Well, those robot dreams are quickly becoming real thanks to the efforts of companies like Meccano.

Nick had a chat with Fraser from Meccano. Fraser explained that many people are probably already familiar with the Meccano brand, as it was known as Erector for many years in the U.S. He also gave details on an incredible new product, the Meccanoid, that Meccano will bring to stores in August of this year.

Meccanoid is a four-foot tall humanoid robot that’s built from an easy-to-assemble kit. Once constructed, users can program Meccanoid by using a simple “record-and-playback” system built right into the bot, or via bluetooth-connected smartphone, or USB-connected computer. The potential of Meccanoid is endless as the kit can be broken down into a number of configurations, limited only by the imagination of the builder.

Interview by Nick of F5 Live: Refreshing Technology for the TechPodcast Network. 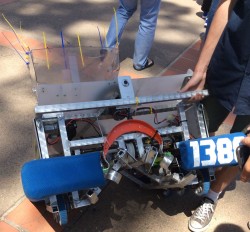 The mechanised carnage and wanton destruction of Battlebots and Robot Wars is great fun but you need some serious robotics chops to build that level of machine. The Attacknid is an affordable toy alternative from from Combat Creatures – Andy McCaskey finds out more.

The Attacknid is a remote-controlled insect-like robot with a modular gun that fires discs or balls. The premise is simple…you and a friend (or friends) control the robots, shooting at each other’s machine. Three hits to the “battle brain” of the robot and it’s dead. Lots of fun and I can imagine this will be a great Christmas present.

Available in the UK now and will be coming to the USA in the fall for around $100.

Interview by Andy McCaskey of SDR News for the Tech Podcast Network.

There’s nothing quite like a really good massage to relax and remove all the stress from your body but few of us have a masseuse on hand, Jeffrey excepted. The WheeMe Massage Robot from Dreambots might be able to help with this problem, as Jeffrey Powers finds out from Cobi.

The WheeMe is a small massage robot that runs over the back of a person lying down to give them a massage. Completely autonomous, the WheeMe uses tilt sensors to ensure that it doesn’t fall off and it has a couple of programs for different types of massage. The WheeMe uses vibrations, wheels and the long fingerettes to give different sensations.

Available now in a choice of red or blue from retail stores worldwide and online for around $100 (or €70). Additional accessories are coming soon.

Interview by Jeffrey Powers of Geekazine for the TechPodcast Network. Robyn must have the best job in the whole of CES!

The Bird Buggy has a joystick that Pepper has learned to control with his beak. The parrot can make its robotic “ride” go forward, backward, and turn from side to side. There is an IR sensor that prevents Pepper from ramming into things to hard, and bumpers that respond to collisions by backing up. The Bird Buggy is equipped with a camera that enables it to return to a docking station when Pepper is done using it.

I don’t have a parrot, but I do have several cockatiels. They are smaller than an African Grey, (and not quite as intelligent). My little birds would probably have one reaction to the Bird Buggy – fear. They dislike things that are new. They also would be too small to use the joystick in the way that Pepper can. There are some similarities between cockatiels and African Greys, though, so I can tell from watching the video that Pepper is greatly amused by, and enjoying, the Bird Buggy.