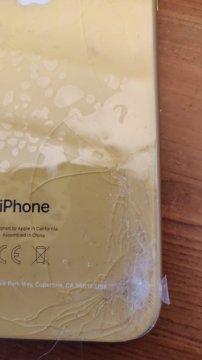 A friend of my daughter called round the other day to proudly show off her brand new iPhone XR in yellow. As she pulled it from her bag, her face went from joy to shock, and when she turned the back of the phone towards me, I could see that it was smashed. She was totally gutted.

With hindsight, it was unwise not to have a case on the smartphone (she’d ordered one) but I really have to wonder about the practicality of a glass back on such an expensive phone. What is the point of having a material that breaks so readily that it’s essential to put a case on? An aluminium rear would look just as good and be a hundred times more practical. Certainly, Apple aren’t the only manufacturer sporting glass backs on the smartphones, but where Apple leads, many follow.

The iPhone XR starts at GB£629. Apple, being Apple, charges a premium for the repairs, especially without AppleCare+. To get the back replaced, it’s “up to” £396.44. Even if you have taken out AppleCare+ at GB£149, there’s still £79 excess so that’s £228 in total. Either way it’s pricey. An independent repair isn’t really an option as the phone is still in warranty.

Of course, the phone’s owner could have done things differently – put on a case, not swing her bag around – she’s not blameless. However, it is a factor that needs to be considered when purchasing a new phone: the fragility, the extra cost of insurance, the annoyance. Breaking the front screen is bad enough, but having to worry about the back is unnecessary. 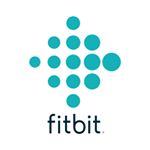 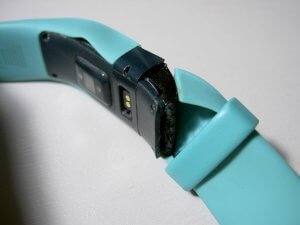 Heart rate monitoring is a standard feature for wrist-worn devices today, but this first came to Fitbit’s product line with the ChargeHR in 2016. I’ve had mine for over two years now, and time hasn’t been kind to it. The strap’s bubbled up and the plastic’s degraded and cracked. The electronics still work fine but the ChargeHR was designed as an integrated unit and there isn’t an easy way of replacing the strap….at least not officially. Fortunately, third parties offer replacements for not very much money. I purchased a metal one with a Milanese bracelet for GB£10 via a seller on Amazon and I’m really pleased with the outcome. Here’s how to replace the strap on a Fitbit ChargeHR. Warning – this procedure is carried at your own risk.

Having learned from my experience, my first suggestion would be cut away the strap about an inch above and below the central electronics. It’s much easier to do the repair without the broken strap flapping around. Get the replacement kit out – there should be the case+strap, a tiny screwdriver, replacement screws and a spudger. 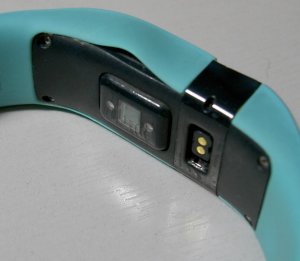 Next, turn the ChargeHR so that the display is downwards and you are looking at the back with the charge port and the pulse sensor. Look for four small screws in the corners of the unit. Use the supplier screwdriver to carefully undo all four screws and remove them from the ChargeHR. Put the screws to one side but you’re probably not going to be using them again.

The electronics unit is held in the case by a couple of plastic clips on each side. Use the spudger to push down the left and right sides between the unit and the case. It’s quite fiddly just to get the spudger in the slot. 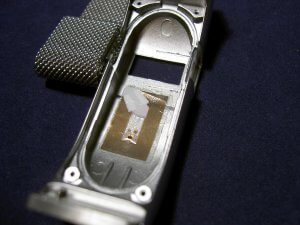 At this point the electronics unit will come free and can be taken out of the old case. Left behind is a small NFC-style sticker which needs to be peeled off and stuck inside the new case. You’ll need fingernails to do this, but once you’ve unpeeled, it simply stick it into the new case in the same position and orientation. Here you can see the sticker in the new case. Try and line it up just below the screen.

Once the stickers in place, give the inside of the new case a quick clean, getting dust and smudges off the inside of the display window. Now just push the ChargeHR electronics into the case. It should clip-in positively. 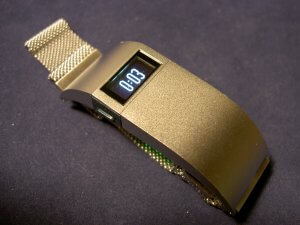 Finally, put the screws back in and use the screwdriver to tighten them up. Use the new screws that came with the replacement kit.

And that’s it. Press the side button and toggle through the display elements, checking that everything still works. I replaced mine about two weeks ago now and I’ve had no issues. Syncing still works fine, though the vibrating alarms are a bit more rattly. I suspect that’s more to do with the metal case than anything else.

If you want to see more, then I’ve a complementary video on YouTube.

One of the worst feelings a person can have is seeking the repair of a product that they have a limited knowledge of how it works. How do they know what they are being told is true? How much does it really cost to fix? How will I know if they really replaced anything and it was just a loose screw causing the problem?
I talk to home and small business computer users daily in the course of my job and the one thing I continue to see is how much they distrust any IT person they come in contact with.
I can’t blame them as they may have seen the same stories on the news about the big box computer stores and national computer repair companies and what their technicians have been caught doing to users and their computers.
The more disturbing thing I’m see is how mom and pop repair stores are selling these people bootleg copies of software and loading up corporate networks with “Free for personal use” software.
I had a client ask me how much it would cost to replace Vista on the machine she had bought a few months back. I told her is would be the cost of a copy of XP plus the install time, she turns to me and says, “My old IT guy was able to upgrade our four of our other machines from Windows 2000 for $35 each.”  At that point I looked at the machines and each one of them had the same CD-Key and an activation hack loaded.
I believe independent shops are hurting themselves and others in the field by devaluing the cost of their services and in the end leaving the customer in a bad situation as well as perpetuating the myth that IT people are arrogant and will sell them what ever snake oil tonic they have to make a quick buck.
The main thing I think people should look for when seeking computer repair outside the home is personal recommendations. Talk to your friends and family and see who they have used in the past. Nothing beats the one-on-one interaction with a repairman as well as how they talk to their customers and explain the problems and possible solutions. Also if they say they need to replace a part, ask for the old one back even you have no plan to keep it.
Thankfully I have never been in the situation where I have had to rely on a total stranger to fix a computer of mine that contains family photos, banking information, personal emails and whatever else passes through my computer on a daily basis.
What experiences have you or your friends and family had with these shops and what are your tips on finding a quality shop?
As always I can be reached at jparie (at) gmail (dot) com.