The Cel Robox is a “desktop micro manufacturing platform” – that’s a small 3D printer to you and me – and while I’m still a little dubious about a 3D printer in every home, this  was one of the first that I’d seen (in real life) that might fit the bill. It’s also quite hypnotic to watch… 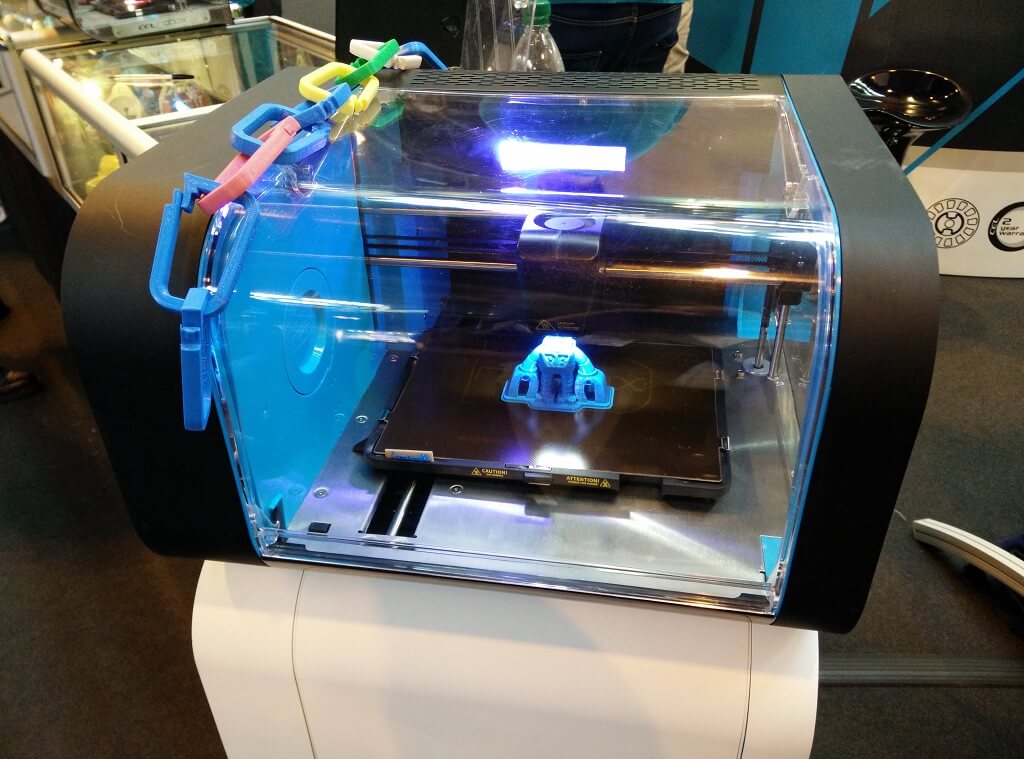 Measuring only 37 x 34 x 24 cm, the Robox is designed to be easy to use with features like auto-loading and unloading of material, dual material printing and print head quick change, with a wide range of material colours and compatibility with Windows, MacOS and Linux. For less that £1000, I think it’s incredible.

The Robox stand at the Gadget Show Live had plenty of example models printed on the device and they looked good. If you want to know more about the Robox, listen to my interview with Dan from Robox. I have been a big fan of DYMO label makers for a number of years. One thing I have not been a fan is the footprint that the earlier printers took up on my desk.  DYMO has been listening to their customers because they have introduced a stylish (PNP) plug and play label maker that sits non-obtrusively on my desk. With a stand the 4×4 device plugs into your PC or Mac USB port and is ready to print labels instantly.

The software to print labels is built into the device and pops up as soon as you plug it in you do not even need to install it. The label printer will print 1/4, 3/8 and 1/2 labels. You can buy multiple color cartridges, the printer came with a black on white cartridge which is perfect for printing mail and folder labels..

I love this device as it requires no power cord, and is very practical as compared to some of their earlier models that required a power cord an transformer.

Here is the best part it only cost $60.00 at most retailers. Great Price, Great Gadget…

Disclaimer: DYMO provided a unit for me to review, and was actually used over the course of a couple of weeks. While we have given the review unit away to a listener of my show, I have went out and purchased my own because I liked it so much.

Toward the end week, HP made some major moves. First, they bought Palm for 1.2 Billion. HP then mentioned that the Slate tablet will be put on hiatus (first thought cancelled). Now there are reports that a “Web OS” will most likely be put on the Slate. Wait a minute – wouldn’t that be “Palm”?

Of course, earlier in the week, we heard that Palm OS was purchased by HP for 1.2 billion. While some say it cost too much, there may be some good reasons why it happened this way. One big reason: HP might have been in a bidding war. Still, Palm OS could become the mobile OS HP has been looking for and that 1.2 billion might net them 20 times that amount.

I know that doesn’t like much, but think of it this way – HP Jornada, Compaq iPaq, Handspring Visor, Palm OS. That is what HP owns now. The only early PDA assets HP doesn’t own is those from  Apple (Newton), Casio (Cassiopeia), Sony (Clie) or RIM (Blackberry) – Casio ended their PDA run and Sony changed focus to mobile gaming. So HP now has the majority of technology for early PDA and the patents within. While this won’t be a shield to any patent infringement lawsuit, one would definitely need a good iron clad case for legal action.

We are entering into the “Keyboardless” era – where you don’t need any peripheral attached to use a machine. iPad shows we can have a decent computing experience without keyboard or mouse. iPad also feels that you don’t need to connect USB devices, so they left all those items off their tablet.

In the meantime, what was first thought as full cancellation, turned out to be more of a “restart” for the Slate tablet. Windows is out, that is for sure. The obvious reality was that Palm OS is in. A good move for HP, but why not have 2 versions?

An engineer at HP was overheard saying Windows 7 was a powerhog. That may be true, nonetheless, are people going to see Palm OS as a good alternative OS? I suppose only time will tell.

Palm’s future: Where else will we see the OS?

With the idea that iPad runs a mobile OS, some are starting to realize the versatility. One OS for your phone, tablet, TV,  car, etc.

Last month I went out to HP to talk about Converged infrastructure. In layman’s terms: a fancy way to say “Server administration”. The idea that you can set up a server room and have anyone administer from anywhere on the planet. However, as I was interviewing presenters, one mentioned something I hadn’t thought about:

… there is no good way to administer a printer….

Most printer problems require physical attention: replace a cartridge, fix a paper jam, etc. But beyond the web page administration of a printer, there has not been much innovation to printer OS technology. What if something like Palm OS was ported to a printer?

Let’s take another approach. HP has another OS called HP-UX; It’s their Unix solution. In a “Converged Infrastructure” world, connecting to servers like the HP-UX is important. So why not have a moble OS solution that can really integrate with this idea?

HP has really pushed their lines of consumer products in the last couple years. From netbooks to touchscreen machines, they have brought a lot of innovation to the machine. But they still rely on other Operating systems to really power the experience.

With a mobile OS solution, they can bring an experience to all these devices, some with option to have both on the computer. If you need Windows or just a device that can access the internet to make a Skype call or send an email.

So there are a lot of places Palm could become integrated. Items that HP could have implemented already with other Operating Systems, but they would still be other companies OS’s. This Palm acquisition can give the mobility HP is looking for in more than one way. That, might be worth the 1.2 billion.

Never let your Audio recorder start doing a Virus Scan in the middle of the show. 15 minutes had to be re-recorded tonight which sucks.. You know me no editing but when the audio was blank I had to do it twice. Probably better the second time around anyway.