Polar is an established manufacturer of monitoring products used by professional teams across a wide range of sports. Now the company is entering a whole new product category with the release of its new Polar Team Pro.

Polar Team Pro is a comprehensive system that begins with tracking devices players can wear while on the field. These devices use GPS data to send real-time information about the player’s location on the field, with near-field communications options to fill in coverage gaps. Those player-based sensors transmit data back to a base station that then syncs up with an iPad app that gives coaches a complete view of what the team is doing during a game.

Polar Team Pro would be an invaluable tool for any team that’s looking to enhance, improve, and maximize player movements on the field. The information gathered by the system will allow coaching staffs to analyze plays and see where their teams’ weak points are, and where things should be adjusted for greater future performance.

The Polar Team Pro set begins with 10 sensors, 10 straps, 1 dock, 1 washing pouch, and 1 shoulder bag. The system can be scaled up for a total of 60 sensors, as needed. Pricing starts at 5999 EUR and goes up from there. If you’re interested in using the Polar Team Pro with your own sports organization, get in touch with Polar for more information. 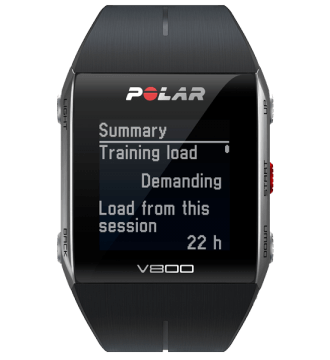 Regardless if you are an athlete, you are likely at least familiar with what a triathlon is. What you may not know is that the Ironman distance is the toughest of them all — yes that’s where the Timex watch got its name. This year’s Consumer Electronics Show in Las Vegas featured a race for the first time, this one sponsored by Polar.

The company is a leading manufacturer of exercise gear of a technological nature — heart rate monitors and such. If you participate in endurance sports then you are likely already familiar with the name.

Polar also had one athlete test its wares during the course of participation. “Olympian and professional triathlete Tim Don demonstrated the Polar V800 multisport training computer during the event by swimming 2.4 miles, cycling 112 miles and running 26.2 miles in 09:40:21.  Click here for images and video of the whole triathlon“.

The numbers relayed were a bit staggering — “Throughout the day, Don wore the Polar V800 to track his statistics during the triathlon.  Over the course of the race, Don reached a maximum heart rate of 182 BPM, sustained an average heart rate of 132 BPM and burned a total of 6,716 calories.  During his 49 minute swim, Don averaged 154 BPM and burned 728 calories.  While on the bike, his average speed was 41.1 [km/h], burned 3,492 calories and averaged a heart rate of 135 BPM.  His three hour marathon run resulted in an average pace of 5:05min/km, an average cadence rpm of 84, a stride length of 111 cm and 2,496 burned calories”. That’s some serious effort.

The device isn’t cheap, as it retails for just over $500. However, if you’re serious about your sport then it could be worth your investment.