If you’ve been using it, then be alert to the fact that Plex made an announcement today that it has uncovered unauthorized activity in the system that may have compromised user data. The service sent out an email to all users that begins by stating, “We want you to be aware of an incident involving your Plex account information yesterday.”

While it’s a chilling start, Plex goes on to try and downplay the extent of just how much damage is involved.

“We immediately began an investigation and it does appear that a third party was able to access a limited subset of data that includes emails, usernames, and encrypted passwords. Even though all account passwords that could have been accessed were hashed and secured in accordance with best practices, out of an abundance of caution we are requiring all Plex accounts to have their password reset.”

It’s up to each user where to go from here. By all means, change your password, but if you wish to play it on the cautious side, there are a number of popular open-source Plex alternatives available. 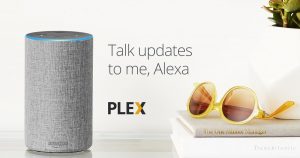 The Plex Skill for Alexa has been updated to improve the way you listen to your music library by including support for Artist, Time Travel, and Library radio stations, recently introduced in Plexamp.

You can now make your very own radio stations out of your own music collection. Library radio plays popular songs from artists throughout your entire music library. Time Travel radio starts with the earliest released music and works forward. And the all-new Artist radio plays tracks inspired by your favorite artists.

It should be noted that Plex is offering free radio stations for a limited time. Radio stations will become a Plex Pass only feature at a later time.

Plex on Alexa has been available in the U.S. and U.K. It is now available for people who live in Canada, Australia, and India. With Plex on Alexa, explore all of these cool new features, totally hands-free, and fall in love with your music all over again!

The Plex website has more details about supported Alexa devices, voice commands you can give Alexa, officially supported Plex apps, and details about getting Plex for free. 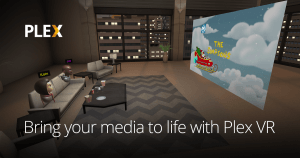 Plex introduces a way to experience your movies and shows in virtual reality with Plex on Google Daydream. It includes interactive environments, voice chat, and a way to watch with friends.

Plex VR lets you choose from three different VR environments. Two are readily accessible: Loft Apartment and The Void. The third is called Drive-In Theater, and it is only available with Plex Pass.

The Watch Together feature allows you to watch with friends. This feature is free for your first week, and then requires Plex Pass. Up to four friends can enjoy Watch Together. Participants must be Plex Friends. Plex VR lets you customize your avatar. Your friend’s avatar will appear in your Plex VR environment, seated next to you.

Digital photos are ubiquitous in modern life. Nearly everyone is walking around at all times with at least one device that contains a built-in camera. That makes it easy to capture everything from big events to everyday life moments, and preserve those memories forever. But this ability to easily take and save pictures does have its drawbacks. The biggest one of them being the avalanche of content that users have to navigate thru when they want to find a specific photo.

Software developers have done a lot of work in recent years to make it easier for users to find their photos. One such developer is media-center creators Plex, who recently added a Timeline View to the photo viewer built into its apps:

Say goodbye to searching through folders upon folders to find that photo you are looking for! Chronological clusters make it easier than ever to see all your precious memories in the order that they happened. Scroll quickly through your whole photo collection, watching time go by as quickly or slowly as your fingers decide in our beautiful mosaic layout.

This new feature from Plex will soon be available to all users. For now, it’s available on a preview basis for users who are subscribed to the Plex Pass premium service.

The ever-versatile media-management Plex app launched a new DVR service earlier this month. Plex DVR works with any standard HDTV antenna and the SiliconDust HDHR series of digital recorders to create a true DVR experience on your favorite screen. Just use the Plex app to tell the hardware which shows you’d like it to capture, and the system will record those shows for free from local over-the-air TV signals. If you’ve been waiting to cut the cord to cable or satellite TV, Plex DVR might be just what you need to finally make that move.

Here are some Plex DVR highlights:

In order to use Plex DVR, you’ll need a digital TV antenna, a SiliconDust HDHR series digital recorder, a Plex Pass subscription, and you’ll need to download and install the DVR beta client. Plex is hoping to add the DVR service to more HDTV recording devices in the future.

Gaining complete mastery over your home entertainment domain has always been a bit of a challenge. You’ve got video files on a NAS, a large music library on a USB drive, photos scattered across a number of devices, and access to multiple audio/video streaming services. One of the best (and most popular) software solutions for taming the home entertainment beast is called Plex. Plex is a free downloadable server that runs on your local network. Once it’s set up, a Plex server can deliver media to other devices using native Plex apps. Plex has apps on most major platforms, including Android, iOS, and Apple TV.

While Plex takes care of the software side of media management, you’ll still need a connected piece of hardware that’s capable of running Plex if you want to access all of that content on the family big screen. There are many options out there when it comes to compatible players. But Plex may have truly met its match with the new NVIDIA SHIELD. SHIELD is a home media and gaming center that’s powered by Android TV. And now Plex is available as a SHIELD app:

With support for 4K video, streamed games, and a powerful processor, NVIDIA SHIELD is perfect for Plex. It runs your Plex Media Server and our elegant Android TV interface, making SHIELD the perfect all-in-one Plex device. In addition to powering Plex, SHIELD itself transcodes your content, so you can stream all your content to any of your other devices.

NVIDA SHIELD starts at $199. Plex is a free download with optional premium features that unlock the full potential of the media-streaming software.

Plex is now on the Roku. If you follow me on Geeknews Central you know that I have a Roku XD|S and that I liked everything about it, except you couldn’t easily stream media from your internal network. There were ways but, they were complicated and unreliable. Well Plex just saved me $100 (the cost of an Apple TV). If you aren’t familiar with Plex it is a fork of XBMC and one of the best way to view your media on a Mac. I actually prefer it over Boxee for watching video. Boxee does have more channels and sharing options that Plex does not have, however I like the Plex UI better. Plus Plex is available on multiple devices, including all OS devices, Mac, PC and Android devices.  It is how I consume most of my media on my Mac and my iPad, including stuff I download from the itunes Store or from Amazon.

Well, this morning I woke up to a post on my feeds, that Plex had been added to the Roku. It is still in beta so you have to add it as a private channel. You do have to have the Plex media server running on a computer on the same network for this too work, Mac or PC, (sorry Linux) . Once you have added it to your Roku channel listing it will stream media that is on your Plex server. Right now it is only streaming video, but according to the Plex blog music and images are coming soon. When you first add Plex it does take sometime to update, so be patient. Once it updates it works fine. I finally have everything I want for now on my chosen media device the Roku XD|S. This makes me very happy, I hope that the Plex team continues to improve on this application. I think this is good for both Plex and Roku.