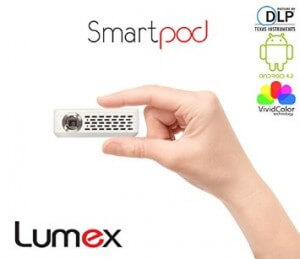 Pocket-Wouldn’t it be cool if you could carry around a big screen smart TV in your pocket?

Actually, that is now possible.

I recently purchased a Lumex Picomax Smartpod pocket pico projector via Amazon.Com. A pico projector is a miniature pocket-sized projector that typically has a built-in battery that can also be operated off of AC household current. Pico projectors can produce surprisingly bright, crisp projected images and traditionally have been handy for people who are traveling and need to give presentations.

What sets apart a “smart” projector from a regular projector is the same things that set a smartphone apart from a feature phone, or a smart TV apart from a regular TV. Smart projectors include not only connectivity such as WiFi and Bluetooth but also come with a built-in operating system such as Android that includes access to the Google Play Store. With the Google Play Store comes video streaming apps such as Netflix, Hulu Plus, Amazon Prime Videos, YouTube, etc., etc. 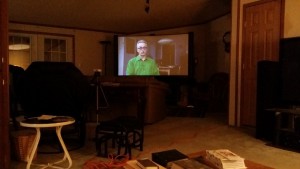 This is a picture of a streaming movie projected onto an 80 inch screen in a darkened room. The photo was taken from about 25 to 30 feet from the projection screen.

I drive a truck over-the-road, so with the Lumex Picomax Spartpod projector I can easily connect it to my MiFi hotspot and project a 45 to 50 inch screen onto a blank wall area of my truck’s sleeper. I connect the projector to a high-quality Bluetooth speaker for excellent stereo sound. Watching a 45 to 50 inch image is a much nicer experience than watching the same material on a much smaller iPad Air screen. It also has the added advantage of extreme portability so I can easily carry it with me and use it in a motel room.

The projector is about the size of a Roku or Apple TV box. It also has a variety of other built-in connectors, such as mini HDMI, VGA, Micro SD Card and standard 4 pin USB port. It uses Texas Instruments DLP chip and the light source is a 20,000 hour LED lamp. The projector comes with a small remote control, and also has a touchpad built-in to the top of the unit itself.

The unit will run about an hour and a half to two hours on the built-in battery. It outputs a 70 lumens when running on battery power and automatically jumps up to 100 lumens when connected to the included AC adapter.

The WiFi and Bluetooth connect and stream flawlessly.at the same time. While the integrated touchpad mouse works okay, I prefer to use a wireless three button mouse. I plug the mouse dongle into the standard USB port on the side of the unit and the mouse instantly connects. With this configuration along with a wireless keyboard it could easily be used as a computer. There is a small integrated fan that runs when the unit is running in order to keep things cool internally. The fan is actually very quiet and doesn’t produce much fan noise at all.

I do have a few criticisms of the unit. First, the manual focus seems a bit sloppy. It is easy to rotate the knob past the optimum focus. When rotating back the knob will rotate freely about half a turn before it starts moving the focus back in the opposite direction, making it difficult to zone in back and forth to obtain the maximum sharpness.

Also, the integrated touchpad does not include mouse buttons like an actual mouse does. It is possible to scroll vertically running your finger along the black vertical dotted line along the edge of the touchpad, but it takes a bit of getting used to. A wireless mouse makes for a much more fluid and satisfying experience.

The tiny integrated speaker doesn’t produce much sound, so it is close to being useless. I strongly suggest using a wired speaker or a Bluetooth speaker for an adequate sound experience. Stereo headphones or ear buds can also be used.

Despite my criticisms I am quite happy with my purchase. The Lumex Picomax Smartpod WiFi projector currently sells for $399.97 on Amazon. It really is like being able to carry around a big-screen smart TV in my pocket.

Todd Cochrane spoke to Christopher Yang from Vivitek about their newest product the Qumi that uses the Pico Projector. The system can project 3D, which you can watch with active 3D glasses, or 2D up to 720P. It uses the Texas Instrument DLP processor with an HD chip set. A full projector with an LED bulb will give off from 800-1000 lumens.

This projector gives off 300 lumens and has a 2500:1 contrast ratio. It is not meant to replace a full projector, it is a great travel projector. It has a VGA, HDMI Connections, USB port, micro SD Card Input and audio-out. You can connect it to a camera, smart phone or laptop. It should be available in April or May time frame for about $499.00