Pandora recently launched Pandora Plus and their new features for their ad-supported listeners. Now, Pandora is unveiling a new brand to enhance your Pandora experience and to help bring music into your life.

Pandora has updated its logo and overall look. They are calling this change a rebrand.  Their announcement includes the following:

Music is a personal experience for everyone, from the artists creating it all the way to the fans listening to it. And as Pandora continues to evolve the most personal music experience, our new look embraces the dynamic range of sound and color, visualizing the energy and emotion that artists pour into the creation of music, and that we feel as listeners. Our dynamic brand is composed of form, color, and pattern, which we implemented in the new P icon and serves as your portal into the unique diverse range of music you love.

In other words, Pandora has a new logo that is composed of a blue capital letter P. They are rolling out their new app icon on mobile devices, whether you listen to ad-supported Pandora or Pandora Plus. Their fresh new look will be coming to the web and other devices over the year. 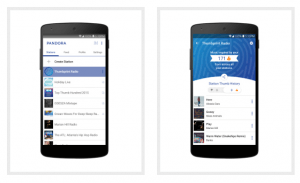 Pandora has launched something new called Thumbprint Radio. They describe it on their blog as “a hyper-personalized station for each listener”. Your unique, individual, Thumbprint Radio station will include music based upon your thumb.

That is to say, it is going to select music for you based upon every thumbs up you have provided throughout the entire time you have listened on Pandora. Give a track a thumbs up, and your station will update and evolve to include it.

Another cool thing about Pandora’s Thumbprint Radio is that it will enable listeners to rediscover songs that they thumbed up years ago. That awesome song that you were in love with for a week, and then forgot about, might return to you via your Thumbprint Radio station.

You can share your stations with a friend. Once you share it, your station is going to dynamically update for your friend as you give thumbs up to songs. This is something to be aware of if you have given a thumbs up to a song you like, but would be embarrassed to have friends know that you like.

It was only a matter of time, I suppose. Pandora has announced that it will be including Promoted Stations. They are described as “native ad units designed to help advertisers drive Pandora listeners into custom content”.

This is the first time that Pandora has natively integrated ad product within a listener’s station list. Those who are currently using Pandora can expect to see some of the Promoted Stations appear in their “Stations You Might Like” list.

Right now, the Promoted Stations are in a “beta launch”. They include playlists from: Kleenex Brand, SKETCHERS USA Inc., StubHub, Taco Bell, and Toyota Motor Sales. More companies may be added as the year goes on.

Obviously, the companies involved are hoping that people will check out their playlist. They hope this will cause people to look favorably upon their products, and that this will lead them to make more purchases. I am skeptical that this is how things will actually work.

For example, as an allergic person, I might decide to take a look at the Kleenex playlist. I buy plenty of Kleenex and like their product. I won’t be buying any more of it just because they have a Promoted Station on Pandora, though. My purchases will be about the same as they were before.

On the other hand, I’m not a fan of Taco Bell (in part because my many food allergies mean that I cannot safely eat their food). I’m not the slightest bit motivated to check out their playlist. If I stumbled upon it, I can guarantee that it will not influence me to start eating at Taco Bell.

It seems to me that the majority of people who use Pandora are seeking out music from bands that they already like and are familiar with. They might decide to give a listen to a suggested band that sounds very similar to one they like. I highly doubt that anyone goes to Pandora to seek out a playlist of random bands selected by a corporation that is trying to sell the listener a product that does not even remotely relate to music.

There’s no shortage of music apps to choose from for both iOS and Android customers. While the former is synonyms with iTunes, that is by no means what you have to use. In fact there are countless alternatives, including personalized radio service Pandora, which today has unveiled a nice little update for Apple customers.

The update brings a new alarm feature that allows you to awaken to your music of choice. “When the alarm goes off, your music will begin to play with album art scrolling in the background. At this point, you can choose to snooze, keep listening to your music or turn off the alarm simply by tapping the song title or artist name on your phone screen”, Mike Grishaver of Pandora explains.

Snooze can be set for 5, 10, 15 or 20 minutes and when the option is pushed your music will pause for that pre-defined period. The feature can also be enabled by simply picking up your device and giving it a shake — in case your eyes aren’t open enough to see the button.

For now this new update is only available on iOS, but Pandora promises that it’s hard at work to bring this functionality to Android customers as soon as possible. When the Chromecast first came out in late July it connected to very few things. You could cast YouTube, Google Music, Google Movies and Netflix. Hulu Plus was added in mid October. Today Pandora has been added to Chromecast.

It works great on my HTC One which is an Android phone. The icon shows up at the bottom and it works exactly like all other Chromecast enable app. It also works on the iPad. However I did run into a glitch while trying to run it on my iPad mini. First it took me some time to find out where the icon was, if you tap on the volume button it is right there next to the Airplay button. Like the Android device the iPad version connects perfectly and starts playing and you can control everything on the iPad.   The problem came when I was trying to disconnect Pandora from Chromecast. On my HTC One you simply hit disconnect and it stops casting. On the iPad there is no disconnect button. I tried to switch to iPad as my choice, but it continued to casting to my TV. Then I started to play a different song on the iPad but the older song continued to play on the Chromecast. The only way I could get it to stop casting was to start YouTube and cast that and then disconnect. I suspect that this is something that will be fixed in the next update.  Other than this glitch it works great.

If you are a Pandora user and don’t have a Chromecast I recommend getting one. I think it adds value to the Chromecast, which in my opinion already was well worth the $35.00 I spent on it.   Being able to play Pandora through my big screen TV which is connected to my full sound system and control it on my tablet or phone is great.

Pandora recently added music from video games by Blizzard Entertainment to its Video Game Music Station. You can now listen to music from World of Warcraft, Diablo, and Star Craft through Pandora for free. You can stream it through a browser or through a mobile Pandora client. It looks like this is available to people who are inside the United States only.

The music in video games has improved greatly since the early days. It started with catchy little tunes that you cannot get out of your head. How many of you can “sing” the Mario Bros. theme song, or the melody from Tetris? Today, video games have added epic soundtracks that can include full orchestras, ethereal vocals, and a moody soundscape. It has become complex, and rich, and something you can enjoy even if you don’t happen to play a particular video game.

In addition to music from World of Warcraft, Diablo, and Starcraft, the Pandora Video Games Music Station also includes music from games made by companies other than Blizzard. There are tracks from Gears of War, Metal Gear Solid, Final Fantasy, Silent Hill, and more. When I went to check this out, the Station selected music from Castlevania: Symphony of the Night for me to listen to.

Pandora is perhaps my favorite music app. In fact, it is the only one I bother subscribing too, paying the small $3.99 per month fee in exchange for unlimited streaming and no ads. This week the company has announced two important new features. One brings customers unreleased music, while the other makes the program more social.

The new Premieres channel is available to all customers — both free, as well as paid subscribers. Premieres looks to bring customers new music before the albums are released. Each week Pandora plans to add albums a week in advance of their commercial release — beginning this week with former CCR singer John Fogerty and English folk musician Laura Marling.

Customers will be able to stream any, and all, songs from the upcoming music releases an unlimited number of times. The service promises new music available every week.

On iPhone, Android, and pandora.com, customers can now choose to automatically publish their Pandora music activity to Facebook, which will populate the musical identity in Facebook’s newly launched music section. A quick toggle on the user’s phone or press of a button on the web and they are ready to go.

Both features are available right now for web-based and mobile customers. Both enhancements will also work for all customers, regardless if they have a free or paid account.