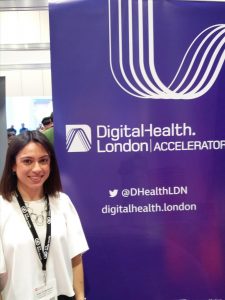 and sources of funding. Consequently, it can be hard for entrepreneurs and startups to engage with the NHS – where do you start? I chat with Rose from Digital Health London, a programme aiming to speed up the development and scaling of digital innovations across health and care, and pioneer their adoption by the NHS…matching innovators with NHS need, and supporting them to navigate the UK health environment.

The Digital Health London accelerator programme works with small-to-medium companies to help these firms access NHS providers through an NHS Navigator. The Navigator is someone who has good understanding of how the NHS works and is funded, and can guide the company to make the right contacts.

The programme also provides guidance on how to work within healthcare, such as running clinic trials, patient safety and handling confidential information. Hopefully these startups can avoid some of the pitfalls seen recently with some of the larger social media companies!