Kano‘s mission is to encourage people, particularly children, to see computers not as unchangeable appliances but as tools to be made, shaped, coded and shared. Their kits plug together bits, boards, buttons and cables to make individual and personalised computers. Joanna gets to the heart of the matter with Todd and the Pixel Kit. 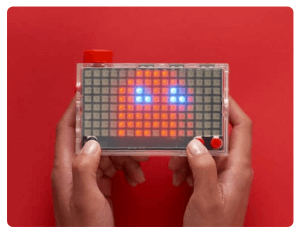 Kano’s approach is to challenge each young developer into programming simple apps that achieve technical goals. Using Kano’s development tools, Kano Code, it’s really easy to build programs as the tools come with code building blocks for things like displaying an emoji or responding to noise via a microphone. It’s very easy to quickly produce something that’s fun and keeps children interested.

The Pixel Kit is available now for just under US$80 and GB£75 from both online shops and major retail stores. 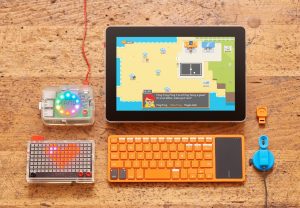 Kano, creator of computer and coding kits for all ages, makes its CES debut this week. Its new computers, which you make yourself – the Computer Kit Complete, the Motion Sensor Kit, and the Pixel Kit teach beginners how to build devices, to code art, games, lights, Minecraft, music, and more.

Kano will also reveal the latest prototype of its Camera Kit, a codable, build-it-yourself digital camera at CES 2018.

During 2017, Kano cemented its position as STEM category leader, raising $28M in Series B funding, one of the largest hardware financing in Europe last year. The company also launched a full range of creative coding kits in more than 4,500 retail stores including Target, Walmart, Best Buy, Barnes & Noble, Amazon, and Toys R Us.

Now, over 200,000 computer builders worldwide have coded and shared more than 380,000 applications, artworks, songs and games thanks to Kano’s suite of DIY coding kits. 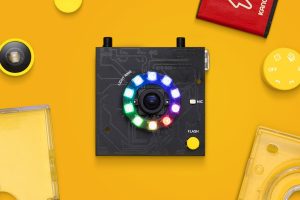 The Camera Kit, originally brought to life via Kickstarter, is a powerful codeable camera anyone can make. It demystifies imagery and lets makers write their own photo filters, make data-driven GIFs, manipulate image capture, and more.

Kano now has a registration page for those interested to get notified once the camera becomes widely available. The Camera Kit will is coming in 2019.