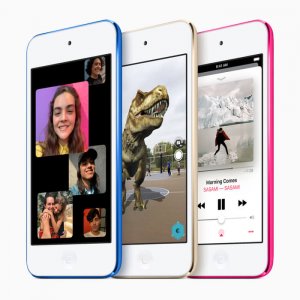 Apple introduced the new iPod touch. At a glance, it could easily be mistaken for a iPhone. The new iPod touch starts at $199 and is available to order on apple.com and the Apple Store now. It will become available in stores later this week.

Previous versions of the iPod touch focused on music. The new iPod touch has more to offer. It has an Apple-designed A10 Fusion chip which brings improved performance in games and immersive augmented reality (AR) experiences – which is a first for the iPod series.

It also has Group FaceTime, which makes it easy for people to simultaneously chat with several people. FaceTime calling requires a FaceTime-enabled device for the caller and recipient and a Wi-Fi connection.

The new iPod touch comes in a new 256GB capacity, giving plenty of space to download music for offline listening through Apple Music or the iTunes store. Apple Music subscribers can access a catalog of over 50 million songs, thousands of playlists, Beats 1 Radio and daily editorial selections from the world’s best music experts.

This fall, gamers can look forward to Apple Arcade, a game subscription service with over 100 new and exclusive games with no ads or additional purchases, with the ability to download games for offline play. It appears that at least some of these games would be playable on the new iPod touch. The Olloclip is a three way lens that you clip to the corner of the iPhone or iPod Touch and it goes over the lens of the phone. It works with the iPhone 4/4S, the iPhone 5 and the iPod Touch 4, 4s and the 5th generation iPod Touch. The lens can work as a fish eye, a macro lens or a wide-angle lens. The macro has 10x magnification, the wide-angle doubles your field of view and the fish eye gives you a 180 field of view. It comes in a pouch.

They are going to release a case that works with the Olloclip in March. Currently most people who have a Olloclip either use it without a case or an easily removable case. The new case has a tripod mount in both landscape and portrait mode. It also has an option for cold shoe mount for a light or microphone, It will work with a regular shoe mount. The Olloclip works with any photo application including Instagram, Flicker and Camera+. The Olloclip is available for $70.00, the website, at Best Buy, Amazon and other retail stores.

It’s a brave man who attempts to find inner balance at CES, but Jamie gives it a go with HeartMath‘s forthcoming Inner Balance.

HeartMath’s Inner Balance combines an iPhone app with a heart rate sensor, providing a feedback loop that helps people control their heart rate, relax and relieve stress. The sensor gently attaches to the earlobe and measures heart rate variability. The app uses a breath pacer and graphical display of the heart rate to help the person concentrate and control their breathing and pulse rate.

The Inner Balance sensor will be available in February for $99 and the free app can be downloaded from the Apple AppStore for iPhone, iPad and iPod Touch.

Amazon Cloud Player has been available for Android devices since it launched, but today Amazon announced that the music app is now available for iPad and iPhone.  That’s great news for iOS owners, especially given that the other big player in this field, Google Music, is also not available for Apple’s mobile platform.

Amazon Cloud Player offers 5 GB of free storage for your MP3’s.  Customers can not only store the music they purchase through the Amazon MP3 Store, but also upload their existing music to the service.  Additional storage is available at tiered rates, which are pretty reasonably priced.  New users can sign up for the service over at Amazon.  The app is available now through the iTunes Store.  The app is free for iPhone, iPad, and iPod Touch and requires iOS 4.3 or higher.  Amazon Cloud Player is also available for Android and on the web. If you’ve ever wanted a second line on your smartphone but don’t have a dual SIM phone (and let’s be honest, who does?), you’ll be interested in this app from Line2. Andy and Don get a demo from Peter on what the app offers.

The Line2 app provides a second line by using a VoIP connection over 3G or wi-fi. All the features of a telephony service are present with a phone number, voicemail, text messaging, call-forwarding and so on. There’s also HD audio if you are calling another Line2 user.

Being a data service and able to use wi-fi means that it’s possible to send and receive calls where there’s no mobile phone signal but there is a wireless connection. SIM-less devices such as iPod Touches or wi-fi-only tablets can become phones too.

Available for both iPhone and Android, monthly subscriptions start at $9.95 a month.