Niantic Labs is the creator of Ingress, a video game that requires people top get up and go outside in order to play the game. Up until now, Niantic Labs was part of Google. That is changing.

Niantic Labs shared information on their Ingress Google + page that explains that they are leaving Google. The post was aimed at people who currently are playing Ingress. 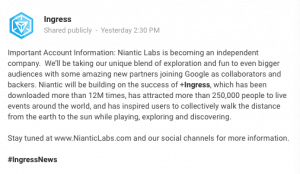 The key part of the announcement is that Niantic Labs is becoming an independent company. “We will be taking our unique blend of exploration and fun to even bigger audiences with some amazing new partners joining Google as collaborators and backers.” Niantic Labs suggests that people who want to learn more about this change should stay tuned to their website or their social channels.

This news comes a few days after Google announced that they were creating a new company called Alphabet. The announcement said that Alphabet Inc. will replace Google Inc. as the publicly-traded entity. 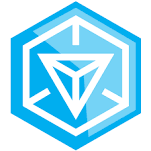 I started playing Ingress earlier this year. I’m still pretty new to the game and I can’t say I’ve made an awful lot of progress. Ingress is an augmented reality game where players choose factions and then battle for control of portals that exist in the real world. Once a new portal becomes available, players from the two factions (either Enlightened or Resistance) can hack the portal and try to ultimately take control of it. As factions continue to claim more portals, they can then link those portals to eventually take control of larger areas.

Traditionally, Ingress could only be played using either Android or iOS apps running on smartphones or tablets. But now, Ingress is available on Android Wear devices. Now it’ll be easier than ever for players to locate portals and interact with them, as the Ingress interface will be readily available on devices like wristwatches, sparing the need to remove a pocketed phone or having to pull a tablet out of a backpack or bag.

The Android Wear version of Ingress is available for download thru the Google Play Store. So get out there and get to hacking those portals! No matter which faction you’re on, Ingress can be a lot of fun and it’s a good way to get some exercise, too.

Another bargain for GNC readers in North America and Europe. There’s 25% off the Ingress editions of Sennheiser’s Momentum On-Ear headphones with the checkout code IngressPromo2015.

Using UK prices, the 1st gen Momentums were originally £170 and are currently on sale at £130. A further 25% brings them down to only £97.49, which is a veritable bargain for headphones of this standard.

The discount will be available from 15 May to 31 May 2015 and the promotion is running in Germany, UK, France, Belgium, Netherlands, Sweden, Finland, Canada and the United States. Prices will vary.