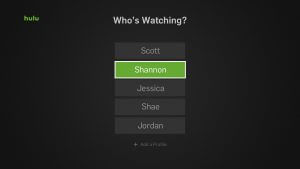 Hulu has announced that they are beginning to roll out profiles to their more than 12 million subscribers. They have started rolling profiles out to a small subset of their viewers and will continue to roll out the feature to more viewers across more devices.

After the new profiles feature is rolled out to your Hulu account, you can add up to six specific profiles. I did not realize, until I read Hulu’s announcement, that Hulu lacked profiles. Netflix has had a similar feature for a long time. Hulu explains the reasoning behind profiles this way:

…TV is very personal and we know people share their Hulu with spouses, kids and family members. Inevitably, you may not be as enthusiastic about Sci-Fi as your spouse. And it is likely that new episodes of Doc McStuffins are not quite as exciting for you as they are for your children. The next step in creating the most personal TV experience is introducing profiles.

Each individual profile can do a “taste picking experience”. Each profile will have its own name, personal info, viewing history, recommendations, and Watchlist. There will also be a new Kids profile type. It will allow young viewers to browse content in the Kids Hub freely, without having to worry about running into mature content.

Many people feel that if they are paying a subscription fee to a TV streaming service that the shows should not have ads in them. In general, the idea is that you can either watch things for free – with ads included – or pay to avoid the commercials. Hulu’s “Limited Commercials” plan didn’t quite make sense because it was billing people $7.99 a month for a subscription while continuing to stick commercials into the content they chose to watch.

Hulu now offers a “No-Commercials” plan. It costs $11.99 a month, and will allow you to watch TV shows on Hulu without having to see any commercials. The FAQ notes that if you sign up with an iOS device and pay for your Hulu “No Commercials” subscription with your iTunes account, the cost is $13.99 per month.

To get people interested in this new plan, Hulu is offering a 1 week free trial. If the only thing holding you back from getting a Hulu account was the ads, it might be worth it to check out the free trial of the “No-Commercials” plan.

The FAQs point out that not all of the shows and movies on the “No Commercials” plan will be commercial-free. Most of them will, however. There are some shows that Hulu has not obtained the rights to stream commercial free. Those shows will have a short commercial before and after each episode. In other words, the shows won’t have commercial interruptions. Currently, that list of shows includes: Grey’s Anatomy, Once Upon a Time, Marvel’s Agents of S.H.I.E.L.D., Scandal, Grimm, New Girl, and How to Get Away With Murder. 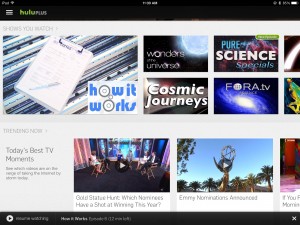 The conglomeration of owners that is known as Hulu has once again backed out of the for sale market. The group – consisting of 21st-Century Fox, NBCUniversal and Walt Disney Company – have confirmed via press release they will once again take the streaming content service back off the market and re-invest to bring more customers.

This is not the first time Hulu has done this. Back in 2011, Hulu had a potential suitor where the deal was called off because the group wanted to re-invest.

“We believe the best path forward for Hulu is a meaningful recapitalization that will further accelerate its growth under the current ownership structure,” said Chase Carey, President and Chief Operating Officer of 21st Century Fox. “We had meaningful conversations with a number of potential partners and buyers, each with impressive plans and offers to match, but with 21st Century Fox and Disney fully aligned in our collective vision and goals for the business, we decided to continue to empower the Hulu team, in this fashion, to continue the incredible momentum they’ve built over the last few years.”

The co-owners of Hulu continued by saying they will be adding another $750 million into the service. This will go toward building a larger subscriber base.

Hulu started in 2008. They currently have content from over 400 partners, 4 million subscribers and 30 million monthly views.

Hulu continues to surprise me — the service never seems quite mainstream, but continues to thrive. This time the TV service is announcing record gains in subscriptions to its Plus service, the paid subscription plan that it introduced back in 2010.

“Overall, Hulu continues to grow very quickly. In Q1 of this year, we set new records for revenue, and for the first time ever, Hulu viewers streamed more than 1 billion content videos in a single quarter” states Hulu’s acting CEO Andy Forssell. In fact, the company has seen continued growth every year that it has existed — in Q1 2013, Hulu Plus surpassed 4 million subscribers—setting new records for subscriber additions. Forssell also points out advertising revenue — “Hulu is also #1 in market share of all premium online video providers, delivering 1 in 3 of all premium video ads in the U.S. Our reasonable ad load drives the highest recall and awareness for brands, which results in higher effectiveness for the video ads”.

Hulu has recently jumped in the game of original content with Quick Draw and East Los High. This brings the service into direct competition with Netflix and Amazon Prime.