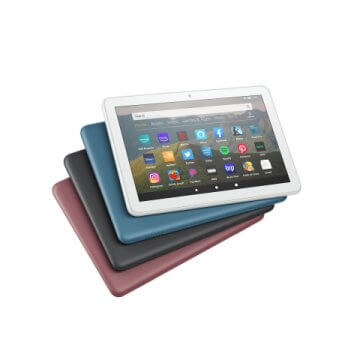 It has been a while since Amazon updated its tablets, but that’s about to change. The company sort of snuck this by with no post to the official blog.

They have, however, come up with an update to the Fire 8 tablets. In an announcement sent to us the company says it will be releasing new Fire tablets soon. The next generation of its Fire HD 8 tablet lineup, designed with the entire family in mind: the all-new Fire HD 8, Fire HD 8 Plus, and Fire HD 8 Kids Edition.

So what do you get with the Fire HD 8? 32 GB of storage, up to 12 hours of battery life and fast charging thanks to USB-C.  Amazon also states “the Fire HD 8 Plus packs even more power with 50% more RAM, hassle-free wireless charging, and six months of Kindle Unlimited included.”

You can pre-order any of these now, but you’ll need to wait until June to get one. We’ll have one for review and let you know our opinion, but it sounds enticing. Prices begin at $89.99. 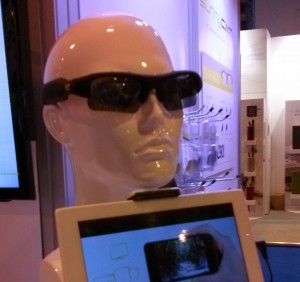 Google Glass might be du jour at the moment, but it’s expensive, unfashionable and of questionable benefit. Undoubtedly, it’ll get cheaper, less obtrusive and have more uses, but until then SunnyCam‘s HD video recording eyewear might be of more practical use. Simply, these are glasses with a tiny video camera in the bridge that cost only GB£100.

The SunnyCam is very much in the style of sports sunglasses. Although you can’t see it in the photos, the camera is in the glasses bridge and records at 720p to a microSD card, making it very suitable for PoV recording when it’s important to see what the wearer is seeing. The lens are easily swapped out for other tints as needed.

The controls and storage are on the legs of the glasses and with only two buttons, are easy to use. Battery life is around 2.5 to 3 hours.

Ben takes me through the SunnyCam at The Gadget Show and its use in several real-life scenarios. Over the Christmas holiday my nephew showed up at my house with an Amazon Kindle Fire HD 7” Inch tablet. My Mom, who just turned 88, ended up playing with it and decided she wanted one. So, we stopped by Best Buy and picked one up.

I spent some time adding free apps from the Amazon Android Market that I knew my parents would like, such as Accuweather, News Hog, ABC, NBC, CBS, CNN, Fox News Channel, recipe apps, etc.

What followed over the next few days was surprising. Of course my Mom started using it right away, but what surprised me was that my 79-year-old Dad started using the Kindle as much as my Mom uses it. Mom has used a computer for a number of years. Dad has played around with computers but never did much with them. Dad made the observation that the Kindle was a lot easier to use than a regular computer.

I have had an iPad for a long while now and my parents have been around it, but they’ve never used it much. The Kindle is a different story. Perhaps they felt more at ease since they own the Kindle, but I think there’s more to it than that. I believe the Amazon Kindle Fire HD has a better, friendlier user interface than the iPad has. The Kindle Fire HD presents app icons in a very large format on a revolving carousel that the user simply swipes through. It didn’t take long at all for them to begin to remember which of these large icons start which apps.

Another advantage the Kindle Fire HD has over the iPad is better, much louder sound. My parents are a bit hard of hearing, yet the Kindle Fire HD is able to get plenty loud enough for them to be able to easily hear, even in a noisy environment. The iPad isn’t capable of getting nearly as loud.

The $199 Kindle Fire HD 16 gigabyte (as well as the larger 8.9” inch version) comes bundled with a free month of Amazon Prime, which includes Amazon Prime streaming videos. Mom ended up easily figuring out how to stream videos and liked it so well she went ahead and subscribed.

The 7” inch widescreen seems to be just the right size for them. It is easy for them to handle, yet large enough for them to be able to see and manipulate the multi-touch screen.

The Kindle Fire HD has a dual core processor and gives great battery life. The apps are very responsive and there is never any lag.

If I were going to buy a tablet today, I would give strong consideration to a Kindle Fire HD. For $199 for the 7” inch and $299 for the 8.9” inch, Amazon is giving a tremendous amount of value and performance for the money.

The only downside that I can see is that the Kindle Fire HD doesn’t have a built-in GPS chip, nor any native mapping apps, so mapping on it is currently limited. However, for $199, it’s easy to overlook the lack of GPS. The WiFi-only versions of the iPad don’t have built-in GPS either.

Now, if I can just get my parents to give up their flip-phone for a smartphone…

Over the past 10 years, I have been very successful in incorporating Skype into my various podcasts. Earlier this year I upgraded my windows based 2 channel SD Skype solution to one that is HD Mac-based. I have depicted the solution I am currently using. Be aware that my end goal was to always have the guest appear full screen in my video production and not just filmed on the monitor. For those shows that want to simply focus a camera on the monitor, you can eliminate a large portion of this design.

I have a two-channel solution, so you would need to double the gear shown here to have two people participate. You can easily utilize a different video ingestion system. I happen to use a Tricaster TC1 for my studio.  Some content creators use a Video capture card from Blackmagic design to ingest the Skype video into their system for use with something like Wirecast.

Note: When the Internet connection is slow, and I have two guests sharing the same Internet connection sometimes the Skype Video reverts to SD this is Skype’s way of throttling to keep the video quality up. I  only push SD video back to the guest to preserve bandwidth. Update: January 2020 the easiest solution today is using a Rodecaster to integrate with Skype if you are doing Audio only. You can still record your interview with the Video on and just capture the Audio recording. Today Sony announced a new waterproof version of their popular Handycam video camera.  It won’t just withstand a little splashing from the poolside, but can actually work while submerged.  Don’t expect to take it scuba diving, but a snorkeling trip will be just fine, since it’s maximum rated depth is 5 meters (about 16 feet).

There was no word yet on pricing, but the Waterproof Handycam should be available somtime around mid-May.