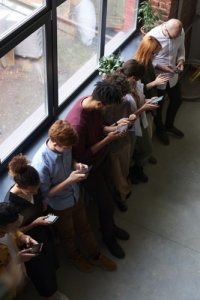 You may have heard of Epik (the web host – not Epic the gaming company). According to Gizmodo, Epik the web host and domain registrar provides services to Gab, Parler, and Bitchute (which Gizmodo described as “conspiracy-theory-laden YouTube wannabe), and The Donald (a President Trump fansite).

Epik also recently hosted the Texas whistleblower website – which was intended to allow people to “snitch on Texas residents who want abortions.” Gizmodo reported that Epic forcibly removed the Texas site from the platform after determining it had violated Epik’s terms by non-consensually collecting third-party information.

Those sites seem to end up on Epik after breaking the terms of services of whatever mainstream hosting company they started with.

TechCrunch reported that hackers associated with the hacktivist collective Anonymous say they have leaked gigabytes of data from Epik. The hackers did not say how they obtained the breached data or when the hack took place. TechCrunch says that, according to time stamps, the most recent files suggest the hack “most likely” happened in late February.

What kind of information was in the data breach? TechCrunch reported that a statement was sent to a torrent file of the dumped data this week. It included a “decades worth” of company data, including “all that’s needed to trace actual ownership and management” of the company. The hackers claimed to have customer payment histories, domain purchases and transfers, passwords, credentials and employee mailboxes.

According to TechCrunch, Epik initially told reporters it was unaware of a breach but an email set out by founder and chief executive Robert Monster on Wednesday altered users to an “alleged security incident.” To me, it sounds like the damage had already been done before users were alerted to it by email.

This is a really good example of why you need to be absolutely certain that the web host that is hosting your content is a reliable one.

When Burger King got hacked, we all laughed at the idea McDonalds might have bought it. When the Associated Press got hacked, we noticed. But it took the Onion in getting hacked for Twitter to finally do something…

Twitter rolled out a two-step verification system for users to get extra protection against would-be hackers. The verification method includes a special code that is sent via phone when they try to log in. With this extra step using a cell phone, hackers can become thwarted in trying to access an account.

This is not a new process – Facebook and Google both give this second verification step in your security features. Its better than a password because you don’t need to remember one. Its also better than a “name your pet” verification because in some cases (like Sarah Palin) people know that information.

If you choose not to opt in you run risk of getting hacked. Of course, you also need to keep your phone numbers up-to-date. If that changes, you might have problems getting into your accounts.

The hardest part of the show is stopping when I have so much to share, but I am going to do my best to keep the show at 70 minutes. The number of you watching is proving keeping the format tight is good for audience growth. On tonight’s show, I have a pretty strong message for the Mac users so you need to listen in on this one.

Congratulations to Katie she is our Lenovo A63 system winner. Big thank you to everyone that participated, this was our biggest response to a contest to date.  Some interesting feedback from the last show and my comments to those comments.  Big thank you to the Ohana for all that you do. I did not get the insider out this weekend but it is on my growing list for this week.  It will be a good one as I have a topic planned that will give you some insight into what I do day, to day to make the show better. Looking for volunteers for CES 2011!

These companies keep the lights on here at GNC your support is appreciated.
Sponsor: Save money at GoDaddy using my Promo Codes significant Cash Savings.
Sponsor: You can save up to 75% or more on term life insurance with Matrix Direct.
Sponsor: Hold your meetings online for just $49 a month Try GoToMeeting free.

Your Geek is Toast, I have been out in the hot Texas sun all day today.. Working on a new project that is going to excite everyone when I announce what I am up to. I must have drank a gallon of water… But that does not stop the tech news and wait till you hear what a school district is doing it is going to blow you away. The voice mail hotline is open 24/7 619-342-7365 or email the show geeknews@gmail.com You need to listen to win as well.

This is a monster show with a huge number of listener comments that I had to get caught up. This show is packed end to end with good info.