Griffin’s iMic has been a long term favourite with those who need 3.5 mm audio jacks on USB-only PCs and laptops. With a USB A plug on one end, and two audio sockets on the other, it does the job of converting audio brilliantly.

But with new MacBooks now only sporting USB C sockets, it was inevitable that Griffin would bring out a new version of the iMic with a USB C connector and here it is. Available in Q2 2016 for US$44.99, Daniel chats with Jackie from Griffin to find out more about the latest iteration of this great gadget. 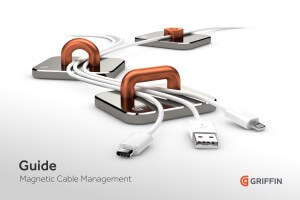 Nothing lights up the obsessive-compulsive side of my brain more than cable management. It can be very satisfying to find ways to organize all of the cables required by my electronics. But it can also be a frustrating process of make-shift solutions and messy cable clumps that only partially work. Fortunately, Griffin has come to the rescue with its Guide cable management system.

Guide consists of three grey steel bases and three anodized aluminum magnetic anchors in three shapes (small, medium and large) that are rearrangeable to capture and guide cables along any surface. The different shapes of the anchors allow for cables of various sizes to be held in place and gives users the option to use just one anchor, or a combination of all three.

Users can arrange Guide’s three steel bases anywhere to hold power adapters, Ethernet, phone, HDMI and charging cables, among others. The three bases and three anchors can be used together on one surface or separately on multiple surfaces.

Guide magnetic cable anchors are on the market now at a suggested retail price of $39.95 for a set of three anchors/bases. Guide is just one item in Griffin’s cable management line of products. 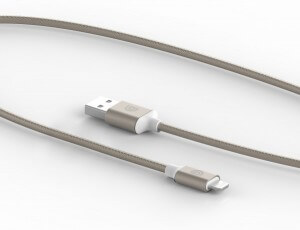 Griffin has announced that their new Premium Charge / Sync Cables with Lightning connector are now available. These cables have easy-connecting reversible USB that can be plugged in regardless of the orientation.

The Premium Charge/Sync Cable’s reversible USB connector works in any full-sized USB port regardless of how it’s plugged in, making it the easiest-to-connect USB plug ever.

Through brutal bend and environmental testing, the redesigned cable has proven that it’s built for a longer, more reliable life. The durable braided nylon cable jacket resists kinking and the anodized aluminum housing stabilizes and protects the Lightning connector from physical stresses. 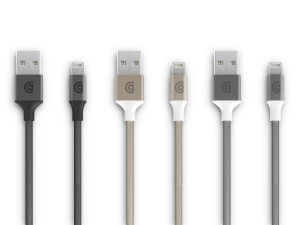 If your house is like my home, there’s a plethora of gadgets to be recharged overnight and a quick tally gives five devices to be plugged in on a regular basis, from phones to tablets to mi-fis. The good news is that Griffin might have the answer with new PowerDock Pro which both charges and organises devices at the same time. Todd finds out more from Heather at the Griffin booth.

The PowerDock Pro can charge five devices at once while neatly racking the smartphones and tablets in bays to keep them tidy with cable management hidden in the base. Smart electronics charge the devices without overcharging and because it charges via USB, it’s device agnostic. Regrettably the PowerDock Pro won’t be available until Q3 with an anticipated price of $130. (If you can’t wait that long, the PowerDock 5 is available now). Griffin has a great range of accessories for all kinds of smartphones, MP3 players and tablets, so it’s no surprise that they’ve a few additions to their product range here at CES. This year they’re announcing a two in-car mounts, some power solutions and a mount for air travellers.

First up, if you have a car that has an aux port (3.5 mm socket), then the WindowsSeat 3 Handsfree is the windshield or dashboard mount for your vehicle. It comes with combined aux cable and microphone that that can be used to make handsfree phone calls and stream music/navigation commands through the car speakers. WindowSeat’s mounting cradle holds iPods or iPhones in most shell- or skin-type cases, as well as a similar sized MP3 players and smartphones, including popular models from BlackBerry, HTC, Motorola, and Samsung. Price is $39.99 and available now.

If you don’t have  an aux jack, the AirCurve Window Mount is the alternative. This windshield mount is designed as an acoustic amplifier which can raise the volume by as much as 25 dB without any batteries or cables. Designed for the iPhone 4 / 4S, simply put the smartphone in speakerphone mode and chat away. Price is also $39.99 and available now.

Griffin’s PowerBlock range has been updated with new models –  PowerBlock Reserve, $59.99, a wall charger for iPod and iPhone that can be plugged into any AC wall outlet to provide a quick boost of power that also has a built-in rechargeable 2,000 mAh lithium-ion battery pack for charging on the go. The PowerBlock Reserve Universal, $49.99, is the same concept but quickly charges any USB device. Both models charge their own batteries at the same time they’re charging connected devices, which is often not the case with competing models. A row of LEDs serve as a power gauge, indicating how much charge is left.

Finally, Griffin is bringing a new product to the market in Q2 of 2012 with a Tray Table Latch Mount. Specifically for the air and rail traveller, the mount is designed to be compatible with 90% of the world’s airline and commuter rail tray table latches and holds your eReader, tablet or smartphone at eye level for comfortable viewing. Very handy.

Pop round to Griffin in North Hall, Booth 5212 at CES 2012 in Las Vegas to see all their latest goodies or you can checked out the dedicated CES section of their website.

You have gotten a new iPhone, iPad or an Android device over the holidays. You love it and it’s looking good, no scratches or scuff and you want to keep it that way. You want to protect it, however you also want to look good doing it.  No, not good you want to look fierce. That is where the Griffin Technology Inc Spring Collection comes in. Griffin Technology Inc was founded at the kitchen table of Paul Griffin in 1992. They are now the leaders in the creation of accessories for the home, mobile and personal technology. They created and developed the iTrip®, PowerMate®, iFM® just to name a few. Breaking new ground on how products are conceived, designed and developed creating fans worldwide. They do all this work in-house and continue to push the boundaries of the industry they helped to create.

This year at CES 2012 Griffin is introducing its news Spring line of cases for the iPhone, iPad, eReaders and more. They have designed their colors and texture from cues they’ve gotten from fashion houses like Alexander McQueen, Prada, Givenchy and others. George Campbell, Griffin’s Director of Industrial Design said “With a diverse array of contemporary textures and fashion-forward designs, we’ve created Spring collections that allow consumers to make their own personal fashion statement.” Griffin will be showing off one line that emphasizes muted colors, simple shapes, cracked paint, worn leather and worn rattan. Another line will emphasize the mixing of stripes, layers, dots, plaids, floral and strong blocks of colors. Griffin is also going to show off new colors including peacock, pool, leaf and blazing yellow. So what ever your personal style is, Griffin will have a case that matches it. You can check of the new Spring case collection at Griffin’s booth at CES, located in the North Hall, Booth 5212.