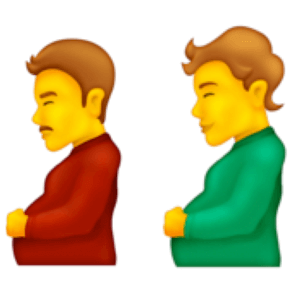 Emojipedia posted original sample images visualizing how new emojis might look when they come to fruition. The mockups might, or might not, resemble the final versions from each platform vendor. The final list of 2021 – 2022 Emoji will be approved in September 2021. Here are a few new Emoji that I found interesting:

Pregnant Man and Pregnant Person are new emoji. These emoji recognize that pregnancy is possible for transgender men and non-binary people. These two new emojis are in addition to the existing Pregnant Woman emoji. All of the pregnant emojis come in a variety of skin tones. 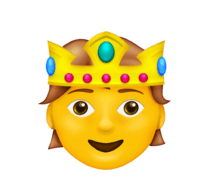 Person with Crown shows a close up of a person who is wearing a crown and smiling. It comes in a variety of skin tones. Emojipedia explains that Person with Crown is a gender-inclusive alternative to the existing emojis for Princess and Prince. 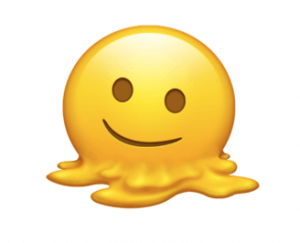 Melting Face is a yellow smiley face melting into a puddle. Emojipedia describes Melting Face this way: “The eyes and mouth slip down the face, yet still maintain a distorted smile. This quality lends this emoji to sarcasm. It can also be used to talk about extreme heat. Can be used metaphorically to talk about embarrassment, shame, or a slowly sinking sense of dread.” 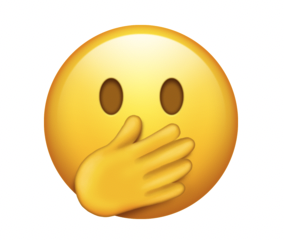 Face with Open Eyes and Hand Over Mouth is described as “An emoji with open (non-smiling) eyes and a hand over the mouth conveying a gasp, shock or surprise. Appearance is similar to Yawning Face though no mouth is visible.

The purpose of creating the Face With Hand Over Mouth that is non-smiling appears to be intended to reduce the confusion as the previous version of the emoji changed how it looked on certain devices – conveying an entirely different message than the person intended. 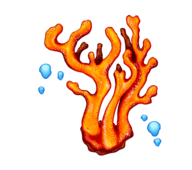 The Coral emoji looks like an orange piece of coral with some blue bubbles around it. According to Emojipedia, the coral emoji is sometimes used as a symbol of climate change due to coral bleaching.

You can view the whole collection of the new 2021-2022 emoji on Emojipedia.

Emojipedia reported that 217 new emojis are coming on iOS. They include a heart on fire, an exhaling face, and gender options for people with beards. The new emojis in this release include couples with a mix of skin tones. A total of 200 of the 217 new emojis are there to permit this more inclusive set of couples to be chosen from the emoji keyboard.

The most interesting addition to the new emojis is a set that includes people with beards. Emojipedia points out that most emojis provide an option for a gender inclusive default, or a specific gender can be chosen to show an emoji as a woman or a man.

The only one that did not have that option was the emoji for “Person: Beard”. It shows a man with a beard, and there are a variety of skin tones to choose from. The new set of emojis lets people specify that they want the “man with a beard” emoji or the “woman with a beard” emoji. Personally, I think this is fantastic because the new emoji options can be used to represent people who are nonbinary or transgender in a positive, inclusive, way.

There is a change to the syringe emoji, which previously looked like a syringe that had some blood dripping out of it. It will be replaced by a syringe that lacks the blood. The purpose is to enable people to use the new syringe emoji to describe COVID-19 vaccinations.

Emojipedia points out that the emoji designs are subject to change prior to the final release.

They say that a picture paints a thousand words. Perhaps that is why many people adore Emoji. One cute, cartoon image can say a lot of things! They can also save people a little bit of time. Instead of typing out “I’m happy”, just use an Emoji smiley face. The person who receives your text will know exactly how you feel.

Have you gotten bored with the Emoji that you’ve seen (or sent)? Not to worry! More than 250 new Emoji are coming soon. They were released on June 16, 2014 as part of The Unicode Standard, Version 7.0. Support for the 2014 Emoji Additions may take some time. The support for the new Emoji characters is now reliant on software updates to include fonts that support Unicode 7.0 from Apple, Google and Microsoft. In other words, each company needs to create the actual icons that represent the new Emoji characters.

Some of the new Emoji for 2014 include: Military Metal, Studio Microphone, Joystick, and a “Raised Hand With Fingers Splayed”. I imagine that one will look like Mr. Spock’s hand when he says “Live Long and Prosper”. There’s also a “Reversed Hand with Middle Finger Extended” for those moments when a smiling face Emoji simply will not do!