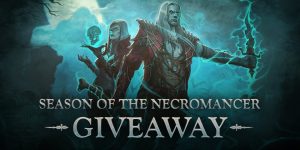 Those of you who still have unsold items sitting in the Diablo III Auction House have a very short time in which to collect them. Back in March of 2014, Blizzard Entertainment announced hat they would be closing both the gold Auction House and the real-money Auction House. Both will be closed forever on June 24, 2014.

Players have had a lot of time to remove their items from either Auction House. Blizzard has done a very effective job of making it clear that the Auction Houses are about to close. They posted it on the log in screen for Diablo III many times. Several different Blizzard Twitter accounts have sent out Tweets about it. Even Tyrael (@AspectofWisdom) reminded players about it!

The @Diablo Auction house will be closing tomorrow. Make sure you check the "Completed" tab to make sure of no leftover items!

Those who had items left in either Auction House got an email a few days ago that reminded them to go get their stuff before it disappeared. The email included instructions about how to go about collecting the items.

Despite all the warnings about the impending closure of both Auction Houses (which Blizzard started sending out in March) there are going to be people will be completely shocked and surprised when they realize sometime tomorrow that can no longer retrieve the items that they left in the Auction House. The items that they ignored, and left to gather virtual dust in the Auction House, suddenly become incredibly meaningful to them. I am expecting a lot of complaining by disgruntled, procrastinating, players all over social media tomorrow.

Blizzard Entertainment has officially shut down the Auction House in Diablo III. This includes both the gold Auction House and the real-money Auction House. A controversial concept right from the start has been removed from the game – forever.

For those who are unaware, the gold Auction House enabled players to take the items that they found in game and put them up for auction. Doing so could result in the sale of the item and some gold for the player who sold it.

The real-money Auction House in Diablo III was the first time that Blizzard Entertainment created an auction house that could be used to earn real money (instead of in-game currency). I remember people being really excited by the idea of selling enough items to pay for their subscription to World of Warcraft (one of Blizzard Entertainment’s most popular games).

There were both positives and negatives to the Auction House system. On the one hand, the Auction House was a great way for players to obtain the items they were hoping to find in the game, but could not. Previous to a recent patch, the “loot” system in Diablo III was problematic. On the other hand, there were those who felt that the Auction House allowed players who had money to “pay to win”. They could buy the best items, and gain an advantage over players who didn’t have the real-world money to spend.

Love it or hate it, I think all players of Diablo III benefited from the Auction House (both types). For example, I’ve never used the Auction House. Several of my friends have, though, and they used it to buy some really awesome items. When they “outgrew” those items, they shared them with other players, including me. The removal of the Auction House is an “end to an era” in Diablo III, and it comes shortly before the Reaper of Souls expansion is released. Good times are ahead!

It’s been a little over a year since Diablo III was released for PC and Mac. We have known for a little while now that the game will also be released on consoles. Now we know the release date. Blizzard Entertainment has now announced that Diablo III will debut on both the Sony Playstation 3 and the Microsoft Xbox 360 on September 3, 2013. Select retailers are offering it for preorder, and the suggested retail price (for either version) is $59.99.

Those of you who, like me, have been playing Diablo III since the beta might wonder why anyone would want to play it on console. I guess the most obvious reason would be so you could play D3 on your big screen TV (instead of your much smaller computer monitor screen).

Those who reserve their copies right away will get an exclusive in-game Infernal Helm for their character to use. It gives an experience bonus to any character that wears it. Another cool thing about the console versions is that it will allow gamers to make a party that includes both local and online players. In other words, you and your friend could be sitting on your couch and playing with two people who are online (and not at your house at all).

What you can’t do, however, is play Diablo III on your Playstation 3 or Xbox 360 and create a party that includes your friends who play D3 on PC or Mac. You cannot mix the two. You also cannot transfer your characters, their progress, or their loot from a PC or Mac game to a console version. That being said, if all your gaming friends use Xbox 360, or Playstation 3 (instead of a computer) the console version of Diablo III will give you a chance to play with them. (Assuming, of course, you have the same gaming device that they do).

Here is the “sizzle reel” that was released when it was first announced that D3 would be coming to consoles. The interface is a bit different than how it is on computers (judging from that shot of the player equipping his Barbarian), but it looks like the essence of the game has been captured.