t’s never good to go over your mobile data plan’s monthly limit. This can lead to higher bills as well as service slowdowns and suspensions. Tools have gotten better over the years for measuring mobile data use. But they still leave much to be desired. Consuming rich media media like streaming video on mobile devices can eat thru a data plan quickly. But by default, most mobile video apps don’t provide any indicator of how much data they’re using, and rarely are the default video quality settings in these apps configured to a lower setting that’d use less data. Netflix is hoping to take some of the pain out of mobile video consumption with new in-app settings that allow users to control how much data the app can use.

In the recently updated version of its iOS and Android apps, Netflix users will find a setting called Cellular Data Usage. This setting can now be changed from the default selection, which uses about a gigabyte of data for every three hours of viewed content, to a lower or higher setting. There’s even an unlimited data option for those who aren’t worried at all about how their video-viewing habits affect their data usage.

This change should come as a welcome relief to anyone who’s been burned in the past by Netflix-related overages. Hopefully, other video app developers will follow suit and add similar options to their own offerings. 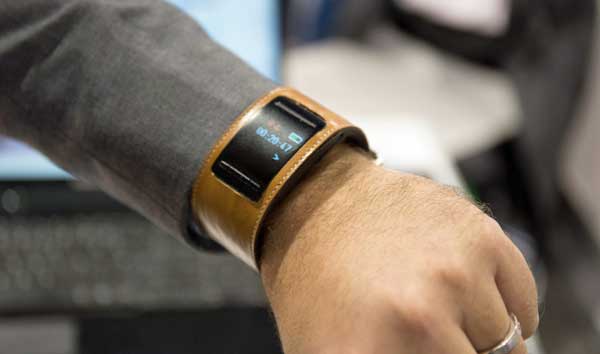 Our personal data is valuable. With the endless stream of hacks and security breaches flooding the news these days, protecting our private information is more important than ever.

Scott spoke with Stephane Blondeau of Ionosys about the Ionosys SmartSafe. SmartSafe is a wristband that securely stores your passwords, account numbers, and other personal data right on your wrist. The wristband uses a combination of encryption and your personal biometrics to ensure that only you as the owner have access. And with NFC capability, SmartSafe can connect to your other devices, including doors.

SmartSafe will be available in September or October. Price is still to be finalized.

Outdated encryption is to blame for a new risk on your cellular device. According to a report by SRLabs and research which will be presented at BlackHat on July 31st, the Subscriber Identity Module (SIM) card can be hacked in a few ways, including through SMS messages.

According to SRLabs, SIM cards use 56-bit DES encryption – a technology created in the 70s. Using what is called FPGA clusters, a SIM can be crackable. SRLabs is looking to make aware these issues, then recommend a better SIM card technology, SMS firewall and SMS filtering so simple hacking techniques cannot access SIM card data.

It is reported that over 750 million SIM cards are vulnerable to this hack. That is 1 in 8 SIM cards, according to Karsten Nohl of SRLabs. An improperly encrypted SMS message – along with use of a custom Java program – can open the SIM to the malware. A hacker can do anything from change your voicemail to access your personal information on the SIM card.

In some phones, most information is stored on the phone and not the SIM. In some phones, SIM data can also include bank information, passwords to websites and programs and more. However, as we move to mobile and wearable devices, more SIM cards will be used to connect people to cellular networks.

Did you ever wonder what everyone around you is doing with their constantly-out smartphones?  Well, Mobclix did some research about what cell phone users are clicking and came up with a snapshot of what goes on in a single minute of usage.  Some of the results may surprise you – like 4,111 ads were clicked on.  Some may not – like that Angry Birds is simply in a category of usage all by itself.  You won’t believe how many people are looking for song lyrics or slicing fruit in Fruit Ninja.

All of this data was put together into one cool infographic.  It’s posted below, so have a look and see what you think.  Does it reflect what you expected?  Do you find anything really surprising?  What would an infographic of your usage reflect? Under a recent change in policy, OnStar which is owned by GM continues to connect to your vehicle and collect information about it even after you have cancelled your account. This change of policy goes into effect Dec 1. This information includes speed, location, odometer reading and seatbelt usage. Information that could be used by both law enforcement and insurance companies among others to both the aid and detriment of the consumer. OnStar stated they reserve the right to share this information with interested third parties, including law enforcement, although they do not do so at this time. OnStar stated that this allows them to communicate to the cars occupants about severe weather, emergency evacuation, and recalls. OnStar also insist that this information is clearly stated in the Terms of Service (TOS) and customers should be aware of it. It is unclear however, whether this is something that OnStar informs the customer when they cancel their service or is it something that the customer has to bring up. This is clearly an opt out service and not an opt in service. Let’s assume that consumers read the TOS when they first get the service and are aware they have to deactivate the data connection when they cancel service to stop OnStar from collecting data. Are they really going to remember this when they actually cancel service, I doubt it and I bet OnStar is betting on this. This change of policy has raise the ire of several Senators including Senator Schumer (NY), Al Franken (MN) and Christopher Coons (DE). They have all called upon Onstar to change it’s policy, Senator Schumer has also requested the FTC to launch and investigation.

First I am presently not a user of OnStar, none of the cars I own have it installed. A few rental cars I used in the past have had it installed. So I have never had to cancel the service. However when I cancel service with a business this means to me and I think most consumer, that my contract and connection to that business has been totally severed. It doesn’t mean the business can continue to collect information about me and that’s alright because it’s for my safety. Why OnStar thought that consumers would be ok with this is beyond me, or perhaps more likely they thought no one would notice. The second question is why OnStar is collecting this information in the first place, if not to sell it. With over 6 million willing customers from which they can collect information from, do they really need to collect information from ex-customers. Finally what prompted the change in policy and did anyone at OnStar say wait this might be a bad idea.

You win some you loose some. But I will be honest an extra set of hands would be great. First five minutes of the show are comical as you will see. An absolute metric ton of tech tonight. Be advised the primary Video feed is going HD and the Mobile Video feed will much more manageable.

Note to Subscribers: Rough show tonight dealing with family issues in Japan that are not good, Shoko is fine but they are having a rough go of it! Thanks for being part of the family. My head was not a 100% engaged tonight as will be evident.