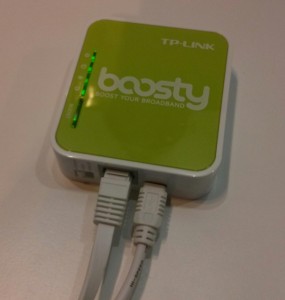 While many of us are fortunate enough to be served by fibre connections to our homes, many of us are still stuck on copper ADSL circuits with single digit download speeds. This isn’t great, especially with the rise of on-line gaming, movies-on-demand and second screening. Most of us have a another high speed data connection in our smartphone and this is where Boosty comes in, seamlessly adding a 3G / 4G mobile data connection to your home network.

I talk to Paul about how easy it is to add the box to your network and the accompanying service which lets you control who uses the mobile data and how much data is used. The Boosty box can use a WiFi connected smartphone or a 3G/4G USB dongle.

Boosty will be available in the next few weeks for £69.99 which includes the cost of the Boosty box plus a year’s subscription to the service. Pre-order at the Boosty site now.

In a follow up to our earlier story on ViaSat and NRTC, ViaSat have announced their new 12 Mb/s satellite broadband service, exede. The high speed service will launch on 16 January beginning at $50 per month, offering 12 Mb/s down and 3 Mb/s up, using the new ViaSat-1 satellite.

The exede service will be welcomed by rural communities that have been unable to get high speed Internet connections because of the lack of infrastructure and the distances involved. Satellite broadband overcomes these issues to offer a “feels like fiber” experience.

“With our new exede broadband service, customers across the United States will have a way to get exceptional speed whether they live in a city, suburbs or a more rural area,” said Tom Moore, senior VP of ViaSat.  “Our new exede service speeds make us very competitive with both wireless home broadband service as well as legacy DSL and many cable services.”

The exede residential broadband packages all feature the same high speed but with higher data allowances at each price point.

Overall, this looks like a great new service for people who were poorly served in the past, but users will have to watch out for those data limits.

The National Rural Telecommunications Cooperative has partnered with ViaSat to offer NRTC members faster 12 Mb/s satellite broadband through ViaSat’s WildBlue service. The NRTC represents the telecommunications and information technology interests of around 1500 rural utilities and affiliates in 48 US states.

The new ViaSat-1 high-capacity Ka-band spot beam satellite was launched back in October and includes coverage over North America and Hawaii, enabling a variety of new, high-speed broadband services for WildBlue in the U.S., Xplornet in Canada, and JetBlue Airways on its domestic U.S. fleet. Capable of 140 Gb/s, this one single satellite has more capacity that all of the other North American satellites put together.

“NRTC’s electric and telephone members were the first distributors of WildBlue service, and they remain committed to ensuring that rural Americans have access to robust broadband,” said Tim Bryan, NRTC CEO.  “The enhanced satellite broadband service will make significant contributions to the communities we serve, so we are very happy to continue our relationship with ViaSat and offer the new service.”

Pricing wasn’t announced, but current WildBlue customers pay between $50 and $80 per month depending on service.  Outside of ViaSat-1’s coverage area, the NRTC will also offer 5 Mb/s broadband service through a range of delivery mechanisms. Based on figures from WildBlue, between 10 and 20 million American households are unable to get broadband through DSL or cable and for them, fast satellite broadband at a reasonable price will be warmly welcomed.

Todd and his team will try to get a demo of the satellite service at next week’s CES.

Between the phone ringing, computers rebooting and me sticking my foot in my mouth 2-3 times I have a great show for you.. Back for one show here in Honolulu and off to Austin next week. Then home for Christmas and to prepare for CES 2012!

In a press release today, Virgin Media announced that it was trialling 1.5Gb/s cable broadband connections with four media companies in London. Offering 1.5 Gb/s down and 150 Mb/s up, if successful it would be the world’s fastest cable broadband and about 240 times faster than the UK average connection speed.

The technology will use the same infrastructure as delivered to residential customers, so in theory, if it works in this trial it should work just about everywhere Virgin has a cable network. Virgin has already successfully trialled download speeds of 1Gb/s in its fibre network but currently offers 100Mb/s as the maximum speed. Virgin has connections to 12.6 million homes, mostly in urban areas, making them one of the largest residential broadband providers in the UK.

Jon James, executive director of broadband at Virgin Media, said: “Demand for greater bandwidth is growing rapidly as more devices are able to connect to the internet and as more people go online simultaneously. Our growing network provides a highly competitive alternative to the fastest fibre networks of the future and, with our ongoing investment plans, we can anticipate and meet demand as it develops over time, ensuring Virgin Media business and residential customers continue to enjoy world-class broadband.”

The four companies involved in the trial are all in “creative industries” working with on-line video, broadcasting and interactive applications. Sam Orams, co-founder of BespokeBanter.com, one of the companies testing Virgin Media’s 1.5Gb broadband, said: “While the average home might not need these speeds quite yet, we certainly will. The internet is critical to what we do and intrinsically linked to our future growth so it’s exciting to be working with Virgin Media at the forefront of broadband innovation in the UK.”

The Virgin Media network uses DOCSIS3 and can bond several channels together to provide the data speed bought by the customer. Consequently, there’s a choice of different speeds (10 Mb/s, 30 Mb/s, 50 Mb/s, 100 Mb/s). Virgin currently offers 100 Mb/s in cabled areas for £35 per month. Regrettably, I’m not in one of those cabled areas and I’m stuck at about 3 Mb/s. Bah!

Left my cameras at home for the live recording, decided to use the Macbook Pro webcam.. Wow what a piece of crap that thing is. Interesting show tonight reflect on the challenges of post show CES! and soliciting ideas for next year. I have a great line up of content for you along with some serious questions on cloning for you to reply to.

Lots of us have yelled AND asked nicely.  And in a year or so, we might just be able to get it.  At least, another way of getting it.  The FCC is prepared to vote on the provisions associated with making so-called “white space” between broadcast channels available for use with super Wi-Fi, service that will be faster have more range, and be more robust than current Wi-Fi.  “Super” Wi-Fi should penetrate walls, as well, making the provision of this new Wi-Fi a huge player in the current broadband market.

It has taken two years for the FCC to complete the appropriate surveys of white space, and come to terms with broadcasters and wireless microphone manufacturers about how the space will be used and by whom.  With the new provisions approved, development can finally occur.  By 2011 CES, proof of concept devices should be on display, with actual primary devices becoming available within a year.

I, personally, can’t wait.  A wireless signal that can go two or three miles, and offer speeds of 10 to 20 mbps to the home or business?  No more worries about having to have fiber, cable, or copper installed?