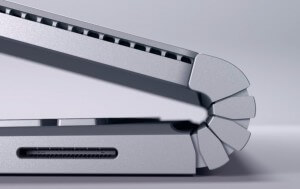 As technology relentlessly moves forward, functions continually consolidate and devices get smaller as capabilities increase. This march forward has caused form factors to shift. The first desktop computers were relatively large and boxy and certainly not portable. Over time as laptop computers improved, desktop sales began to fall.

Imagine the succession of devices you have gone through over a long period of time. They start out as clunky and single purpose, and over time as the tech improves they get smaller and some of them are simply absorbed such as camcorder and point-and-shoot cameras. Imagine them endlessly changing and continually morphing as your expectations changed over long periods of time. There is an ongoing war not only between devices, their capabilities and their form factors, but there is also a war going on inside of each end user of these devices as to which one is better and performing specific tasks.

The first mobile phones were large and clunky. Mobile phones went through a long progression over time of getting smaller as capability increased and eventually turned into the ubiquitous smartphones we know and love today.
The ongoing warfront is now between smartphones, tablets running apps such as the iPad, and conventional laptop computers. Which one is better at performing what task?

Up until about 2011, I did all of my mobile computing on laptop machines. I got an iPad 2 in 2011. I found the iPad 2 to be a great media consumption device, so between the iPad 2 and my Android phone, I gradually stopped using my laptops for all but real productivity tasks, where the iPad and other tablets really seem to fall flat.

In 2013, I bought an iPad Air. In retrospect, I justified the purchase to myself thinking that the faster processor in the iPad air might enable me to move completely away from laptop computers altogether. Sadly, this was not the case. The iPad remains a great media consumption device, but as a productivity device it is still quite lacking.

My primary use for computers includes writing articles, editing video, editing my websites, and recording and publishing audio podcasts. While it is possible to do all of these tasks on an iPad or an Android tablet, it’s an unnecessarily painful, slow experience necessitating jumping through multiple hoops.

I believe many people did exactly the same thing I did, trying to turn the iPad into a small ultraportable laptop. The iPad makes a lousy laptop. There is no mouse, and though the iOS apps are great for media consumption, the apps make lousy productivity impostors. The iPad makes a poor netbook. I believe that is why Apple forbids the iPad from using a mouse.
The conventional laptop makes an inferior media consumption device.

Beginning in May of 2014, a new entrant entered the ongoing device war. I believe a significant portion of the future of computing resides in the so-called 2 in 1’s. I don’t believe that conventional laptops or tablets running apps will go away, but I believe the 2 in 1’s such as the Microsoft Surface Pro 3 and above will eat into laptop and tablet sales. Apple has yet to enter this 2 in 1 market, despite the recently-announced iPad Pro. The iPad Pro running iOS apps will be a bigger iPad and thus a bigger media consumption device that can’t run genuine productivity software.

I personally see a future for myself with a large screen smartphone, and a 2 in 1 tablet/computer, with some room left over for inexpensive mid-sized tablets that function as media consumption devices and offer mapping and GPS functions. I will allow my conventional desktop and laptop computers, the majority of them now-older out-of-date Macs, die of attrition as they inevitably quit working over time. 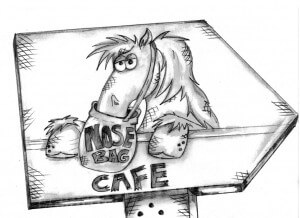 At the Pony Palace riding school, ponies Barney, Biscuit and Kaz are getting up to their usual mischief during Summer Camp with their riders Holly, Carrie and Patrick. With a clear round needed to clinch the winning rosette, it’ll take tumbles and tears before everyone’s back safely in the stables.

Pony Palace Camp is the first in a new series of books, Pony Friends Forever, that all pony-mad children will love. Based on the animals and events at Lessans Riding Stables outside Belfast in Northern Ireland, author Pauline Burgess tells the stories from the ponies’ point of view. Although light-hearted and fun, each book will will deal with a situation that young people face, from illness to family-breakups. Launched today at Lessans, the book is available from all good retailers, including Amazon and Waterstones.

For regular Geek News Central readers who fear that they have inadvertently logged onto Mumsnet, the author Pauline, is a friend and neighbour, hence the diversion from the usual tech topics. Normal service will be resumed shortly with reviews of the Motorola Moto X and the Archos Helium 50 smartphones. PANTONE The 20th Century in Color looks to me like a great Christmas gift for anyone interested in colour and history: graphic designers, interior decorators, costume designers, website builders, Renaissance geeks. Authored by Leatrice Eiseman and Keith Recker and published last month, it’s a view of the last century with a focus on colour. Of course, it inserts the relevant Pantone colours allowing you to recreate colour schemes from the past to great effect.

The blurb says, “Pantone, the worldwide color authority, invites you on a rich visual tour of 100 transformative years. From the Pale Gold (15-0927 TPX) and Almost Mauve (12-2103 TPX) of the 1900 Universal Exposition in Paris to the Rust (18-1248 TPX) and Midnight Navy (19-4110 TPX) of the countdown to the Millennium, the 20th century brimmed with color. Longtime Pantone collaborators and color gurus Leatrice Eiseman and Keith Recker identify more than 200 touchstone works of art, products, decor, and fashion, and carefully match them with 80 different official Pantone Color palettes to reveal the trends, radical shifts, and resurgences of various hues. This vibrant volume takes the social temperature of our recent history with the panache that is uniquely Pantone.”

Hyperbole aside, I think this will be fascinating look back through the past century and will be more than just a coffee table book: it’ll be a source of inspiration for when you want to get that “period feel”. It’s on my Amazon wish list so with luck, I’ll be able to bring you a review in the New Year.

(You’ll just have to forgive the twin spellings of colour and color in this article.)

Can someone say “Irony?” Little did the Onion know, they were reporting a “Close to news” story. And it happened in the same week.

I heard about this Twitter account a few weeks ago. An old codger saying things that just make you laugh. Here are a couple Twitters:

“You look just like Stephen Hawking…Relax, I meant like a non-paralyzed version of him. Feel better?… Fine. Forget I said it.”

“Son, no one gives a s— about all the things your cell phone does. You didn’t invent it, you just bought it. Anybody can do that.”

“The baby will talk when he talks, relax. It ain’t like he knows the cure for cancer and he just ain’t spitting it out.”

“Just pay the parking ticket. Don’t be so outraged. You’re not a freedom fighter in the civil rights movement. You double parked.”

Oh yeah, there is also talk of the Twitter having a book deal, too.

I am not a lawyer, but as much smack as I talk about the RIAA, their is no way in this world that I would play music that any of the major license holders could come back on me and say hey guess what buddy you have violated my copyright and you owe me some money.

If you haven’t read my book, and if you are playing around with fire in playing music that you have not personally been given explicit written permission to play, and you are positive that the music is not licensed by ASCAP, BMI, RIAA and a handful of other acronyms you better be careful!

In the referenced article I am not familar with the song but Brag Gibson points out a concern over music he found on the Podsafe Music Network, and looking at what he has to say makes me wonder if some people are putting a lot at risk.

I have not taken the time to look at the agreement that the podsafe music network makes their artist sign, but I am sure some music that should not be their has likely slipped through the crack. [bradfordgibson.net]

This is one of the reasons why podcasters still need a clear cut licensing model! I sure would like to play some ACDC on my show from time to time.

Last night I and others here in Hawaii were honored in an awards ceremony. I was very humbled to have been picked to receive a Hawaii High Tech Leader Award for 2005. I received a certificate from the Governor of Hawaii and one from the Mayor of Honolulu. My wife wasted no time trying to find a place in the office for them. Personally I kinda hate I love me walls. She deserves credit more than I do for putting up with me working 24/7.

She had the digital camera out and was snapping up pictures. I’ll get those posted on Flickr tonight, I am not sure when the official photos will be available but getting a picture next to the gorgeous Miss Hawaii was nice.

The food and music were great and although many large companies were honored it was nice to see a small company like ours compete in the big leagues. The award was a result of several items primarily my book on podcasting, what is going on with Podcast Connect and the information we provide via Geek News Central get recognized.

Quite seperately I logged into the Author site at Wiley this morning and was very pleased with the book sales. I want to thank each and every one of you as sales are still going gang busters, and it continues to move real good on all the online sites. I am truly surprised by the numbers!

If you attended last nights event and we did not get to chat please drop me a line geeknews@gmail.com

I am hearing sales are still very strong, nice to see the work get some more recognition.

NetLibrary eBook of the Month