If you don’t believe the adage “If it’s free, you’re the product” then you need to go and look at the BBC’s foot-stomping and whining at Google.

The BBC has pulled its podcasts from the Google ecosystem and in a blog post, Kieran Clifton, the BBC’s Director of Distribution and Business Development, explains why. He says, “Google has since begun to direct people who search for a BBC podcast into its own podcast service, rather than BBC Sounds or other third party services, which reduces people’s choice.”

This seems very laudable at this point, though by several accounts, the BBC Sounds app isn’t that great. However, it all becomes much clearer in the next few lines, “….this means us getting hold of meaningful audience data…Unfortunately, given the way the Google podcast service operates, we can’t do any of the above...”

This isn’t an altruistic crusade by the BBC to stop Google, it’s simply that the Beeb wants to get its grubby hands on podcast usage info. They already force you to login into iPlayer so that they can check that you’ve paid your TV tax, sorry, TV licence at GB£154 per year. If you don’t believe me, go here – “Will you share my data with TV Licensing? We share some of your personal data with TV Licensing to check if you are using BBC iPlayer and to keep their database up to date.”

I’d hoped that the BBC would be above this kind of behaviour but it’s becoming clear that it’s just another commercial media organisation, albeit a state-supported one. Sad to see the day. 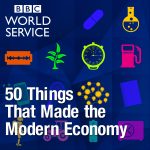 The rapid advance of technology might seem to be the defining feature of today’s world but tech is only one piece of a complex puzzle. From lightbulbs to TV dinners, shipping containers and public key cryptography, the BBC World Service reveals Fifty Things That Made The Modern Economy.

The programmes are a little under 10 minutes long and examine an eclectic range of inventions, ideas and philosophies that underpin much of which is familiar to us. Some are obvious, such as the smartphone and iPhone in particular. Others less so, such as the Haber-Bosch process. The supporting evidence for each thing is provided via a reading list for every episode on the website. There’s no fake news here, Mr Trump.

The series is a little over halfway through (episode 30 is the latest) and all the past programmes are available for listening on demand from the BBC. For true hipsters, it’s on the Wireless – times vary with location.

Add it to your playlist for something a little less ephemeral and a little more enduring. If you own a pet, you know what the urine smells like. Apparently, so do Dell Lattitude 6430u users. They started complaining the smell on the messageboards. Turned out, Dell confirmed the smell is real (but not really urine).

“The smell is not related to cat urine or any other type of biological contaminant, nor is it a health hazard,” the BBC reported that Dell support technician SteveB said online. Further, a Reddit post explains more

The palm rest is the origin of the smell. It was suggested the polymer in the plastic emitted a smell similar to cat urine.

Dell has implemented a replacement program for those 6430u users.

Others on Reddit joke about hanging their cat over their old laptop to get that “New laptop smell”.

Netflix, in its battle with Amazon Prime and, more recently, Redbox Instant, continues to add new content. Now the company is bringing some of the BBC Worldwide content to its streaming platform. Elizabeth Bradley,vice president of content acquisition at Netflix, made the announcement this morning — “We’re thrilled to let Netflix members in the US know that we’re introducing three new extraordinary series from the BBC Worldwide this spring and summer”.

Netflix announced on April 15th that it would be moving from Microsoft’s Silverlight platform. “Over the last year, we’ve been collaborating with other industry leaders on three W3C initiatives which are positioned to solve this problem of playing premium video content directly in the browser without the need for browser plugins such as Silverlight. We call these, collectively, the HTML5 Premium Video Extensions” said Netflix’s Anthony Park and Mark Watson. There’s a pretty good chance that if you are a 40+ British geek, the mere mention of “Elite” will roll back the years to hours of gameplay in front of a BBC Model B, flying a wireframe starship around an almost limitless universe. Trading, fighting, arms-dealing, slavery, whatever it took to get respect and the coveted Elite status. Even now, I still feel a small hint of pride in my own Elite achievement, over 20 years later.

Created by David Braben and Ian Bell, Elite was the first 3D game and eeked every last ounce of performance from 8 bit processors and 32 KB of RAM, even less once the OS had taken its share. There were tricks such as making all the objects in the universe concave, which significantly reduced several calculations in techniques such as hidden line removal and despite being largely only in monochrome, it was totally amazing for its day. Returning to the original ethos of Elite, David Braben has launched a Kickstarter campaign for “Elite: Dangerous” to raise £1.25 million ($2 million) for the development of a new game in the canon, aiming for delivery in March 2014. Elite: Dangerous will be a multi-player game in a massive universe and initially the game will be for the PC, but other platforms will be looked at.

As usual, there are various funding levels, but £20 gets you a copy of the game plus the opportunity to reserve your commander’s name. But if you were looking to get lunch with David Braben at £5000, I’m afraid that all five slots have already been taken.

There’s additional reporting at the BBC.