Want to know what the world’s longest aircraft looks like? You’re probably picturing something sleek and angular like a Concorde jet or maybe something ultra-futuristic from a sci-fi film. But you’d be wrong. Very, very wrong. Because the world’s longest aircraft looks more like a giant elongated watermelon with fins on the back. Yes, it’s the Airlander 10. A kind of plane-airship hybrid. And it was recently taken out of the hangar for the first time.

The Airlander 10, officially named the Martha Gwyn, is the result of years of work by British company Hybrid Air Vehicles (HAV). Martha measures at 302 feet in length, which is about 60 feet longer than most commercial airliners.

The craft was originally conceived by the U.S. military for surveillance purposes. But the project ran out of money before it could be completed. Hybrid Air Vehicles took the army’s original concept and ran with it. The company believes the Airlander 10 could be used for more than just military work. HAV is hoping to build multiple Airlanders in the next few years where they could be used for passenger vehicles, tourism movers, humanitarian missions, cargo jobs, and more.

Martha Gwyn was towed out of its hangar onto a field where it is to remained tethered to the ground. No firm date has been set for the giant aircraft’s first official flight. 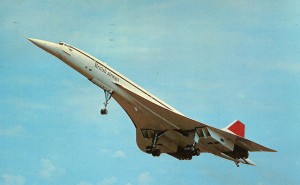 Flown primarily by British Airways and Air France, the Concorde supersonic jet was an impressive achievement in aviation technology. The delta-wing style plane first flew in 1976. After a few years of operation, the Concorde was relegated mostly to transoceanic flights, because its noisy sonic booms caused problems for people who lived under the plane’s flight path. The Concorde was officially retired in 2003, with most of the fleet winding up in aviation museums around the world.

Due to the its unique design and limited cabin capacity compared to other modern airliners, Concorde tickets were usually out of the price range of everyday travelers. If you wanted to get from London to New York in speedy style aboard a Concorde, you’d have to shell out thousands of dollars above the average ticket price. For this reason, the Concorde was often utilized by celebrities and wealthy business people. And while the economy probably hasn’t improved that dramatically for most people over the last twelve years, there are still some deep-pocketed travelers who’d like to see the Concorde return.

A group calling itself Club Concorde is pooling money together to revive the supersonic jet and they believe they’ll be able to achieve this goal as early as 2019. It’s unclear as to how the club will actually get its airplanes. Pulling old Concordes out of mothballs and restoring them to flying status doesn’t seem like a viable option, so brand new planes would have to be built. And while the group has raised over $180 million so far, it’s going to need much more than that to fund just one working Concorde.

In a change from the normal CES programming, Don interviews Jack Ellis, TPN‘s video production engineer, who is normally behind the camera rather than in front. Jack’s a retired airline captain who had the job of every boy’s dreams, that of a test pilot.

Regrettably he doesn’t spill the beans on any hair-raising near-misses and Don will have to get him back to rectify that omission, but he does talk a little about aircraft that are now museum pieces.

We’ve all seen the amazing fast jet formation flying as performed by the RAF’s Red Arrows and the US Navy’s Blue Angels. Imagine, though, if the aircraft weren’t F/A 18 Hornets but five Airbus A350 XWBs….

Todd is still out for one more show, enjoying his Vacation somewhere in the lower 48, I’m Mike Dell, from Podcast Help Desk, former Geek of the North and I will be your host for tonights show. Most of you don’t know me unless you have been around podcasting a long time. I used to do a show called Geek of the North which was a Tech Show. I have since Podfaded that show and I now do a relatively new show called Podcast Help Desk  at podcasthelpdesk.com where I talk about the geeky techie side of podcasting and help people get setup and going with their podcast.

It’s great to be back with the GNC listeners!  I last hosted this show on November 10th 2008 Show #415.   A LOT of water has gone under the bridge since then!

Square Phones?  What are they thinking??

Android Screen Mirroring to chromecast is out now

Solar Sail craft to hitch ride with Spacex in 2016

Want a tour of the USAF Museum restoration hangers?

Aereo uses Supreme court ruling to get back in business as a cable provider.

Company with $39 in assets now worth over $5billion!

The most common misconceptions about the big 8 tech companies

5 to 8 times more battery on your tech toys!