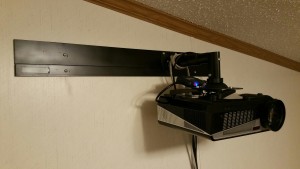 Over the years I’ve spent a fair amount of money on different types of electronics. Back in the 1980’s much of that money was spent on a never-ending succession of high fidelity amplifiers and speakers. I still have most of that equipment and it still functions quite well to this day.

In the 1990’s my purchasing patterns shifted to a voracious appetite for personal computers, peripherals and software. Though I seemed to derive enjoyment at the time, I have comparatively little that remains useful today with the exception of a fairly massive 25-year-old computer desk.

From the mid-2000’s forward my computer-buying habits slowed somewhat, but I partially shifted from Windows to Apple machines. In the past couple of years my adoption of Android smartphones has mostly usurped my computer usage, completely freezing any urge to acquire new computer equipment. The computers I have – two older Apple laptops, two Mac Minis, a Compaq machine running Vista, and an Asus Netbook running Windows XP, all work remarkably well after equipping most of them with modern SSD’s. I record podcasts, write occasional articles, and do my taxes once a year and that is now the extent of my computer usage. Barring some unforeseen disaster, these older machines should last well in to the foreseeable future.

Of all of those consumer electronics purchases, few things stand out as being really enjoyable. Though I enjoyed the computers at the time, the investment in stereo equipment still delivers satisfaction, some of it 30 years on.

Today, I derive the most use and gratification from my smartphone. It is always with me and it ably handles most functions.

However, that doesn’t stop me from looking at and experimenting with consumer electronics. Back in the early 2000’s, I briefly considered buying a projector. At the time I didn’t think I had a good place to put it or use it, and the idea quickly got pushed aside. As it turns out, I’m glad that I didn’t buy one then, because consumer video technology was still standard definition and projectors of the era were expensive and primitive by today’s standards.

Fifteen years later, projector technology is radically better and far less expensive. Don’t get me wrong – it is possible to spend a fortune on modern projection equipment if you want the latest and greatest and your budget allows. However, it is possible today to get really great bargain projectors that can offer great value and performance.

When I bought my house 20 years ago, for whatever reason one of the extra bedrooms ended up as a junk room. I have no one to blame but myself – it was easy to just pile stuff in the room, close the door, out of sight, out of mind. Over the years I had given little thought about what to do with that extra room. It is fairly small – 9 and ½ feet by 13 and ½ feet, but nonetheless it could be made into a useful space.

A few months ago I started thinking about projectors once again. I purchased an Android-powered pico projector from Amazon to bring with me when I travel. I then realized a great use to put the junk room to – clean all of the junk away, and set up a larger wall-mounted projector capable of projecting about a 95” inch diagonal image on the opposite wall. 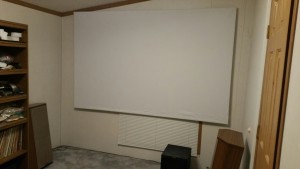 I just happened to have plenty of extra speakers and an old surround sound receiver that had been lying around in the junk room for a few years. After a bit of research I purchased an inexpensive $350 dollar LED-powered Android 720p Chinese projector from Aliexpress.Com. After doing how-to video research on YouTube I purchased lumber and a friend helped me make a large wooden 16 x 9 format frame. I purchased Carl’s Place blackout cloth via Amazon, and with the same friend’s help I now have a large homemade projector screen that cost me a total of about $75 dollars in materials.

I purchased a projector wall mount from Amazon that was under $50 dollars, plus a few other odds and ends. From Walmart I purchased an inexpensive Sony BluRay player for under $50 dollars that even includes WiFi support and the important apps I need – Netflix, Amazon Videos, Hulu Plus and YouTube. I purchased a 5 input HDMI switcher from Amazon for under $20 dollars as well as well as a $15 dollar 25’ foot long HDMI cable to run up the wall to the projector. I even purchased an HDTV tuner that includes an HDMI output from Amazon for about $25 dollars. On the more expensive side, I purchased a 10” inch Klipsch subwoofer from my local Best Buy store for $300 dollars.

All together, I’ve spent less than $1,000 dollars. The resulting projector system for that price is impressive. I can stream HD content from the Internet, I can play BluRay discs, or I can watch local over-the-air digital TV. The digital TV tuner even has a USB port that will accept up to a 2 gigabyte hard drive if I wish to utilize its HD DVR functionality! All sound is routed through the surround sound receiver. 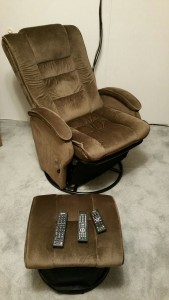 Best of all, that once-upon-a-time useless junk room now has a great use. I have 100% control over the light so the resulting projected 95” inch 720p image is crisp and clear.

Some people might scoff at my purchase of what is essentially a no-name Chinese projector as opposed to spending a few hundred dollars more and getting a name-brand projector such as an Epson or one of the other brands of HD projectors. My reason for going with the no-name Chinese 720p LCD projector is simple – it uses a Cree LED lamp that will likely last 30,000 hours or more. Most name brand projectors use conventional bulbs that must be replaced after only 3,000 to 5,000 thousand hours and can cost $150 and up – way, way up in some cases, more than I paid for the no-name 720p Chinese projector. Especially for a first-time purchase, why not go with a projector using an LED bulb? I’m willing to spend money on electronics – if I didn’t like it, I could always go with another more expensive machine later.

It turns out that I really like the no-name Chinese projector. It has two HDMI inputs along with various analog inputs, outputs, USB and even an SD card slot. It runs Android 4.2.2 and even came equipped with a wireless mouse, along with a remote control. If I wish, I could easily also pair it up with a wireless keyboard and use it as a computer with a large projected display. The Android 4.2.2 comes with the Google Play Store so that means it has access to all the Google Play Store apps. At $350 dollars, I consider it a true bargain.

This has also been a learning experience. I’ve found over the years that regardless of how much I research something, I never really know about it until personally taking action. The only thing I would change about the room setup at this point would be to go with the so-called “Flexigray” screen material from Carl’s Place as opposed to their black-out cloth which is bright white and the most commonly used projection screen material. Because the room is so small and has light colored walls and ceiling, when the projector is on in the otherwise pitch black room it lights up the room enough to create enough stray bounce light from the side walls and ceiling to slightly interfere with the projected image. At this point I could either take steps to darken the walls, or re-cover the screen with the Flexigray material which has superior stray side light rejection properties, thus creating better black levels. I probably won’t make any changes anytime soon – the current projected image really is just fine. But, it’s something I learned and something to keep in mind for future reference.

For under $1,000 dollars, I’ve managed to create an amazingly enjoyable experience. That same money could have easily been spent on the latest gadget being pushed – say an overpriced smart watch – a dubious solution in search of a problem that comes packaged with planned obsolescence for your spending convenience.

Even though it has only been a couple of months, I already know that setting up this projector room is one of those rare things that offers genuine satisfaction and enjoyment, as opposed to all of those things that soon enough ended up unused and obsolete in a pile of dusty junk.