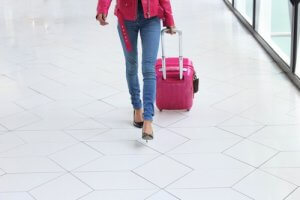 Those who choose to travel during this holiday season should make an effort to keep a close watch on their baggage or carry-on items. Previously, Apple gave iOS users the ability to use AirTags to keep track of their stuff, and to identify when an AirTag has been placed on their stuff by a stranger. Now, Android users will have the same ability to protect themselves.

CNET reported: The new app, which Apple released on the Google Play store Monday, is intended to help people look for item trackers compatible with Apple’s Find My network. “If you think someone is using an AirTag or another device to track your location,” the app says, “you can scan to try to find it.”

The Verge posted a screenshot of what Apple’s Tracker Detect does. The screenshot shows a blue circle, with a smaller blue dot in the center. Three smaller circles show a key, a backpack, and an AirTag.

The screenshot includes the following text: “Tracker Detect looks for item trackers that are separated from their owner and that are compatible with Apple’s Find My network. These item trackers include AirTag and compatible devices from the companies. If you think someone is using AirTag or another device to track your location, you can scan to try to find it.”

As The Verge pointed out, the Tracker Detect will alert Android users if it finds a tracker that shouldn’t be there. However, it is “purely a manual search.” The Verge makes it clear: “Tracker Detect doesn’t help you keep track of the AirTags attached to an Apple account, so it’s not helping Android users actually use AirTags.”

In my opinion, it appears that Apple’s Tracker Detect could provide Apple users who have added AirTags to their belongings to quickly learn that a tracker that they did not put there has been detected. Tracker Detecter can provide Android users with the same information, but the user will have to do a manual search for the unknown tracker while scanning for it. That said, everyone traveling should always keep a close eye on their luggage and carry-on items.