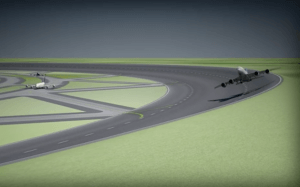 Since the earliest days of powered aviation, runways have had a simple, consistent design: A long, straight path, usually made of concrete or asphalt (or sometimes nothing more than a dirt strip or open field). It seems logical enough, as aircraft need a certain amount of clearance to land or takeoff. Thousands of airports have been built around this runway concept. It seems like an unshakable foundation of modern aviation.

But one group is challenging the notion of the current standard runway. Their so-called Endless Runway project actually proposes circular runways, that would surround an airport terminal:

That somewhat technical explanation breaks down to this: If runways are laid out in a circular fashion, air traffic controllers could adjust the entry and exit points of aircraft depending on where ground conditions are most favorable within the circle. Modern runway designs are static and mostly immovable. If there are heavy crosswinds that could cause trouble for takeoffs and landings, pilots and controllers either have to make the best of a bad situation or potentially call for the runway to be closed. But the circular runway design means aircraft can be directed to use the safest part of the circle, no matter what the conditions may be on any other part of the circle.

This approach could make airports safer and more efficient. For more information on circular runways, check out this video recently produced by the BBC. 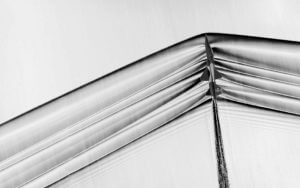 Supersonic (traveling faster than the speed of sound) flight has been possible for about 70 years. The auditory results of cracking the sound barrier are sometimes heard (and felt) in the form of sonic booms. But what does it look like when an object reaches Mach 1? Often, aircraft are photographed with a visible plume of moisture erupting around them when they reach supersonic speeds. But that’s just part of the picture, as NASA observed with a recent photographic experiment.

Having access to plenty of modern technology and techniques, NASA used an updated version of this technique called background oriented schlieren (BOS):

First, researchers obtain an image of a speckled background pattern. Next, they collect a series of images of an object in supersonic flow in front of the same pattern. Shock waves are deduced from distortions of the background pattern resulting from the change in refractive index due to density gradients. This method requires very simple optics and a variety of background patterns, including natural ones, may be used. The complexity with this method is in the image processing and not the hardware or positioning, thus making BOS an attractive candidate for obtaining high-spatial-resolution imaging of shock waves in flight.

Detailed explanations of the project (and a few more images) are available at the link above.

3D printers have become all of the rage these days and there are plenty of good reasons for that.  After all, these devices can do some pretty amazing things like creating spectacular architectural models and even working gears that are ready to go immediately upon render.  But how about printing a model airplane that can actually fly?  Yes, they can now do that also.

This isn’t a small model either – it has a 6.5 foot wingspan.  It was created by students at the University of Virginia’s School of Engineering and Applied Science and they have posted a video of the model actually taking flight.  This isn’t the first time that 3D printer device has accomplished this feat, but it may be the first time it has been pulled off by students.

The era of 3D printing has certainly arrived and we are seeing better and more advanced projects appearing all of the time.  We certainly aren’t at the point where we can print a real aircraft, but medical devices are already being developed using these incredible pieces of hardware.