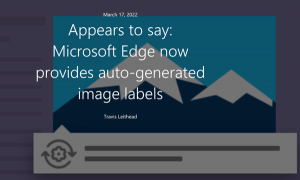 Accessibility is extremely important. Microsoft appears to understand that. The company announced that Microsoft Edge will now provide auto-generated alt text for images that do not include it. Auto-generated alt text helps users of assistive technology, such as screen readers discover the meaning or intent of images on the web.

Many people who are blind or low vision experience the web primarily through a screen reader; an assistive technology that reads the content of each page aloud. Screen readers depend on having image labels (alternative text or “alt text”) provided that allows them to describe visual content – like images and charts, so the user can understand the full context of the page.

Microsoft points out that alt text is critical to making the web accessible, yet it is often overlooked. According to Microsoft, their data suggests that more than half of the images processed by screen readers are missing alt text.

To make this easier on everyone, Microsoft Edge will now use automatic image descriptions. When a screen reader finds an image without a label, that image can be automatically processed by machine learning (ML) algorithms to describe the image in words or capture the text it contains. Microsoft notes that the algorithms are not perfect, and the quality of the descriptions will vary, but for users of screen readers, having some description for an image is often better than no context at all.

After the user has granted permission, Microsoft Edge will send unlabeled images to Azure Cognitive Services’ Computer Vision API for processing. The Vision API can analyze images and create descriptive summaries in 5 languages and recognize text inside of images in over 120 languages.

There are some exceptions. Certain image types will not be sent to the auto-image caption service, nor provided to the screen reader:

If you prefer to add the alt text yourself, you can do that instead of using Computer Vision API. There is a way to turn off the policy name AccessibilityImageLabelsEnabled feature.

Another really cool thing about this is all Microsoft Edge customers on Window, Mac and Linux can use Microsoft’s built in alt-text service. However, the feature is not currently accessible for Microsoft Edge on Android and iOS.

People who don’t use screen readers may not understand why it is so important to provide a description for images that you post on your website or on social media. It only takes a few seconds to write an informative description, and it will bring more context to the images read to a person who uses a screen reader.

Twitter has added video captions. It posted a tweet on December 14, 2021, that said: “ Where are video captions when you need them? They’re here now automatically on videos uploaded starting today.”

The same tweet explains that for Android and iOS, auto-captions will show on muted Tweet videos; keep them on when unmuted via your device’s accessibility settings. Those using Twitter on the web can use the “CC” button to turn auto-captions on or off.

TechCrunch reported that Twitter’s auto-captions will make videos more accessible for deaf and hard-of-hearing users. According to TechCrunch, auto-captions will be available on web, iOS, and Android in over 30 languages, including English, Spanish, Japanese, Arabic, Thai, Chinese, Hindi, and many more.

You can see the entire list of languages that can be used in auto-captions in a blog post on Twitter’s Help Center.

The same blog post points out that if your Tweets are protected, only your followers can view your videos in your Tweets. “Please note that your followers may download or re-share links to videos that you share in protected Tweets. Links to videos shared on Twitter are not protected. Anyone with the link will be able to view the content.” Twitter suggests that if you don’t want anyone to see your videos on Twitter, that you delete the Tweets containing those videos.

Twitter responded to a tweet in which someone asked if there will be an option to translate auto-captions to English. Twitter responded in a tweet: “Auto-captions will appear in the language of the device used to upload the video originally. Translation isn’t available just yet.”

It should be noted that videos that have already been posted to Twitter will not have auto-captions added to them. That is something Twitter needs to fix. 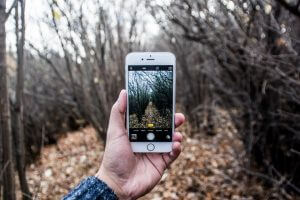 It has been said that adding an image to your post in social media is a good way to get more people to look at it. People who are blind or visually impaired might not be able to see those photos. Facebook and Twitter have made changes that are designed to make the images more accessible.

Facebook posted a blog that explains the change they are making. “With more than 39 million people who are blind, and over 246 million who have a severe visual impairment, many people feel excluded from the conversation around photos on Facebook. We want to build technology that helps the blind community experience Facebook the same way that others enjoy it.”

Facebook has introduced something called automatic alternative text. It generates a description of a photo using advancements in photo recognition technology. People who use screen readers on iOS devices will hear a list of items a photo may contain as they swipe past photos on Facebook. The change is a big one. Facebook states that before, the screen reader would describe a photo as “photo”. Now, the screen reader might say something like “image may contain three people, smiling, outdoors.”

This change was made possible due to Facebook’s object recognition technology. Facebook has launched automatic alt text on iOS screen readers set to English, and plans to add this functionality to other languages and platforms soon.

This follows a change made by Twitter that was designed to improve accessibility. As of March 29, 2016, people who use Twitter’s iOS and Android apps can add descriptions (also known as alternative text) to images in Tweets.

Users can enable that feature by using the compose image descriptions option in the Twitter app’s accessibility settings. The next time you add an image to a Tweet, each thumbnail in the composer will have an add description button. Tap it to see the image, and then add a description (of up to 140 characters). Doing so will help people who use screen readers to “see” your photo.