I have a Compaq desktop PC that’s a few years old that is handy for tasks such as doing taxes or writing articles with. Unfortunately, it came with Windows Vista. More than a year ago I installed an inexpensive 128 gigabyte SSD in it. The SSD sped things up dramatically to the point where Vista was actually usable. To be honest, apart from being a bit of a resource hog, Vista has been quite stable on this machine.

While doing my 2016 taxes I received an on-screen Microsoft notification warning me that the Vista “End of Life” date is April 11, 2017. That presented me with a dilemma. Should I pay for the upgrade to update the Compaq to Windows 10? Or, should I just replace the machine with a newer model that came with Windows 10 preinstalled?

If I were buying a new machine, I would insist on an SSD. Unfortunately, after a bit of looking, it seems that desktop computers with factory-installed SSD’s are as rare as hens teeth and if they are offered at all they tend to be on the pricey side.

The other problem is that the old LCD monitor that’s attached to the Compaq is VGA only. I would have to also have an HDMI to VGA adapter unless I wanted to replace a perfectly functional monitor.

PC manufacturers complain that PC’s just aren’t selling very well. Have they ever thought about the fact that the models they are offering for sale tend to be mediocre? How about offering a $500 desktop tower that has a reasonable processor, a reasonable amount of RAM, and a 128 or 256 SSD?

Is that too much to ask?

In my opinion the SSD offers one of the biggest performance boosts of any upgrade ever, and yet PC manufacturers seem to be mindlessly failing to utilize it to excite consumers with. I’m afraid it doesn’t make any sense. Why should the consumer get excited about machines slowly booting from spinning hard drives that offer performance that is, from a perception standpoint, not that much different from the Windows machines on sale in the same stores a decade ago?

The only excuse for the lack of SSD-equipped desktop PC’s that seems to be offered is that customers “expect” one terabyte or larger drives on which to store massive amounts of pictures, music, etc. I don’t know if that is true or not. Personally, I stopped storing my stuff on my computer hard drives starting upwards of three years ago. I use a network-attached, Internet-savvy Western Digital MyCloud drive to store all of my digital stuff on. I also employ multiple inexpensive large spinning drives as redundant back-up drives. All of my 8,000 plus pictures are additionally stored with Google Photos for instant access to every picture I’ve ever taken right from my phone. I use my computers as creation and manipulation tools and NOT as mass storage devices.

In the end, I opted to go the cheaper route and buy a copy of Windows 10. It came on a USB thumb drive. It installed just fine on the Compaq. Everything seems to work, with the exception of an old Canon scanner that Canon offers no Windows 10 driver for. The loss of the Canon scanner is not a problem since my HP all-in-one WiFi printer can handle any flatbed scanning needs I might have. It did a large Windows update, and I installed a couple of things such as Dropbox and TurboTax 2016. The Compaq won’t win any speed competitions, but it’s poised to continue to do chores such as taxes until October 14, 2025, Windows 10’s scheduled end of life date. By then it might be time for a new computer.

Let’s been honest, it’s not often that the average geek needs to duplicate a single hard drive to five others in a range of physical sizes and capacities. But if you did need to do it, Aleratec have the machine for the job with the snappily named 1-to-5 HDD Copy Dock Advanced. Jamie and Todd find out what it offers from Perry Solomon, President and CEO of Aleratec.

The Aleratec 1-to-5 duplicates one SATA drive to five others, taking both spinning disks and SSDs while catering for both 3.5″ and 2.5″ form factors without any additional adaptors. In itself, that’s not particularly amazing as Aleratec do other units that will duplicate 24 HDDs at once, but this working prototype has a couple of features that set it apart. First, it has a secure erase function which will wipe disks to Dept. of Defense standards, but more impressively, the 1-to-5 has the capability to duplicate from a larger drive capacity to a smaller drive capacity. This situation often occurs when moving from an HDD to an SSD where the HDD has a volume capacity in a terabytes but the SSD has only gigabytes. Obviously the files on the source drive have to be pruned to fit the space on the receiving drive but it’s a great feature on a duplicator.

The price of the 1-to-5 HDD Copy Dock Advanced is $899 and will be available shortly. 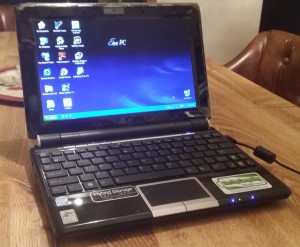