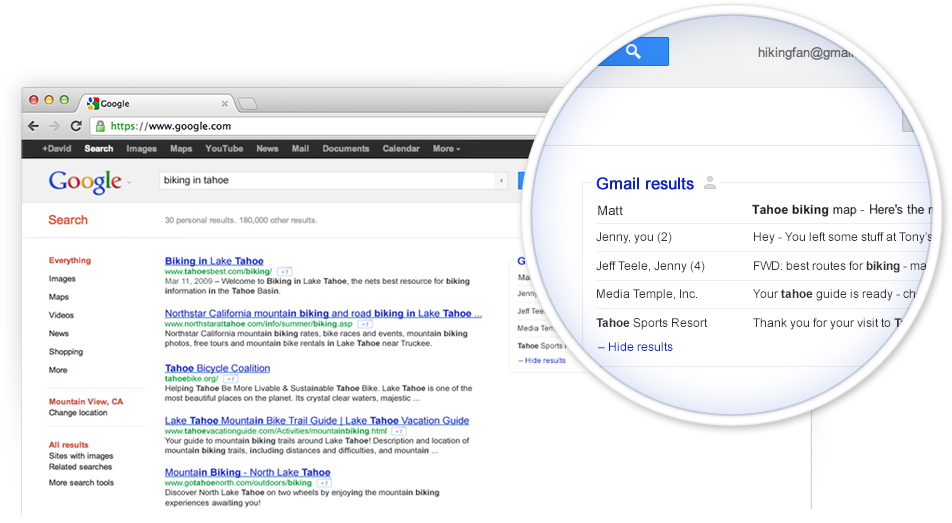 When I opened up Google search page this morning I noticed that on the right hand side of the screen are the words Gmail results. I had signed up for this when it was offered back in the beginning of August. First a little background, I work from home and I am the only one that uses the computer. So I don’t have some of the security concerns that other people might have. However if I was using my computer at a coffee shop there are several ways to turn the option off. The first is on the page itself.   If you go up to the small globe on the right hand side of the windows just below the search bar and click on it, this will hide those results. The second way is to click on the gear and go to your search setting and go down to Personal results and click on “Do not use personal results”. There are a few things that I noticed while using it for short period. The first is the words have to match exactly including capitalization. The second is when you first start using it, it is not clear what does what until you click on it. On good side until you click on a choice nothing shows, so you don’t have to worry about Gmail results just popping up. If you are on a public computer and you are signed into your Google account and you are worried about clicking on it accidentally, I would recommend turning the option off.  It will not be available to Google App accounts. Finally I did not receive an email confirmation, it just appeared This is a simple concept – a search engine that returns Google image results for the same search term from countries across the globe. The results are pretty compelling. Be forewarned – you could end up losing a decent amount of time to this site once you get started.

This Cultural Difference Image Engine (the site itself lacks explanatory info, so I’m making that name up) appears to be the work of a seasoned activist and tech veteran Aaron Swartz and accomplished artist Taryn Simon. The effect is to get a glimpse of what Google users in other countries see when they use the search engine. The results range from brow-furrowing to hilarious.

Based on the several dozen search queries I submitted, the clear winners for substance and style here are North Korea (spoiler alert – almost all results have nothing to do with what you searched for) and Syria, followed closely by France and Iran. Heck, they can all be pretty weird.

If you’re having a tough time figuring out where to start, you can get some pretty odd results from some foreign nations when you type in names of food. You’re on your own from there.

Most everyone who has a website knows about, and worries about, search engine optimization (SEO).  There is certainly no shortage of tools available either, especially for WordPress users.  There are “all-in-one” solutions like All in One SEO Pack, Platinum SEO, and WordPress SEO.  There are niche solutions like SEO Smart Links, SEO Friendly Images, and many more.

Skyrocket SEO recently conducted a survey to see what tools people are actually using.  They put their results together and created an infographic that shows what the “experts” are using.  It provides some good insight into tools you may not have been familiar with and also into what the current thinking is and how fast these things move.  For instance, 85% would change software if something better came along.  BuzzStream tied MajesticSEO for the most used software with 32% usage, while only 7% used Screaming Frog.

The infographic is posted below (click to enlarge it).  If you have other tools or plugins that you use then let us know in the comments below. Yahoo announced today that they are enhancing their image search.  It has a new tiled interface, a “latest” tab for trending results, a “galleries” tab, and Facebook integration that displays pictures from your friends with your results.  The biggest change is, perhaps, the way clicked images are displayed.  According to the Yahoo announcement:

“By clicking on any image on the search results page, the image will appear on a fresh page allowing users to browse effortlessly through full-size images with a simple click on the desktop browser.”

The new tiled interface renders all images in equal size, which I actually like better than Google’s “mismatched” look.  Like Google and Bing, Yahoo enlarges an image if you hover your mouse over it.

Yahoo is also claiming that more improvements are on the way.  These changes are worth checking out because I think this may be the cleanest, prettiest image search of any of the big three search engines.  Of course, the bottom line is the results your query gets, and that remains to be seen.  You can test it out at images.yahoo.com. If you are at all interested in search or Google you have no doubt noticed the on going battle between Google and Demand Media. The fight is over search ranking, the higher in search your site are the more likely people will go to your site, which for companies like Demand Media means more money. Many people complain that companies like Demand Media are simply content farms and that they are gaming Google search to the detriment of better sites. First what are content farms. Content farms are defined by most people as companies that use a large number of authors to crank out post. The posts are optimized for search by the use of keywords. The idea is to get as many hits to the web site they can. Demand Media is considered to be one of the biggest content farms by most critic. Below is a great visual guide to how Demand Media Works.

You will notice if you scan down toward the bottom of the image that Demand Media is at this time very successful financially. They are successful because they have figured out how the Google search algorithm works and they send users to their sites which means money thru the ads that Demand Media owns. Wall Street likes Demand Media’s business model and traffic growth. In January 2011 when Demand Media went public its stock was priced at $17 per share, the stock has not gone below $18 a share and has gone as high $26. Despite Wall Streets love affair with Demand Media many user and Google are not fans of Demand Media or other content farms. Articles written for these sites are often of low quality and are written by people who have little knowledge or interest in the subject they are writing about. Unfortunately because they are optimized for search, they tend to push more relevant and higher quality articles down the search results. In February 2011 Google made an update in their search algorithm. Prior to that Matt Cutts, Principal Engineer for Google wrote a post on Google’s Blog, acknowledging that content farms had become a significant problem for Google. Although Google has never verified that the changes in their search algorithm were targeting sites like Demand Media all paths point in that direction.

It is too early to tell if Google’s changes have had any effect on sites like Demand Media. In fact Demand Media’s EVP of Media and Operations, Larry Fitzgibbon, stated a week after the changes were made that they had seen little effects on the number of hits to their sites and for now the numbers seem to be bearing them out. In fact Googles changes maybe having more effect on sites that are not content farms such as Your Tango.

Clearly, this is not an easy problem to solve after all many articles written on sites like eHow, which is own by Demand Media are basic but good post and maybe exactly what the user is looking for. Also changes to the search algorithm effect not only content farms they also can have bad effects on legitimate sites such as Your Tango. The one change or addition that Google made around the same time as their algorithm changes is they added the ability for users to block sites from their individual search results. If users take advantage of this option then that will at least improve search for that user and hopefully over time for everyone. Unfortunately, Google can only do so much, as long as users click on these sites in Google Search they will continue to rise to the top of the search results, or as the cartoon Pogo once said, “We have met the enemy and he is us.”.

There’s good news for Microsoft in the latest comScore report on browser usage.  The report, released today, shows Bing has made a decent gain in market share from October to November, while both Google and Yahoo had a very small decline.  Although, one could argue about the Yahoo part since they are part of Bing now – I don’t know how comScore is dividing those. As you can see Bing rose 0.3% from October until November, which may not seem like a lot, but in this market it’s actually a pretty big deal.  It’s also the highest market share Bing has yet achieved.  Both Google and Yahoo dropped 0.1% as did Ask, which continues to try and find an identity for itself.  AOL remained the same.

So what does this mean?  Probably not a whole lot.  After all, Google isn’t going anywhere and they are continuing to innovate.  The surprising thing to me is that their most recent innovations – like Instant – seem to have not paid off so well according to these numbers.  It’s quickly becoming a 2 horse race between Bing and Google, but I think that Microsoft will be happy with a solid second in this market.